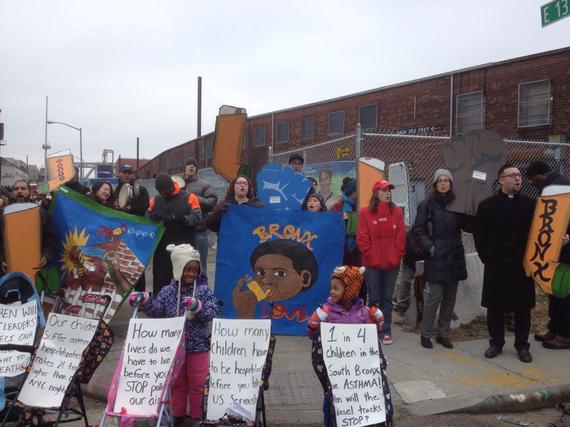 The South Bronx is notorious for its high rates of asthma among racial minorities as a result of their proximity to sources of air pollution. The combination of the poverty-stricken area and historical displacement exposed people of color to health hazards that are rooted in discrimination and negligence.

The truth behind the urban landscape of the South Bronx is an irony. Despite being the most open borough with green spaces in New York City, the South Bronx has been subjected to more environmental hazards than other boroughs. The area has transformed into a space for urban decay and toxic waste. In fact, the biggest waste stations in NYC are located there and two of them include: New York Organic Fertilization Complex and Browning Ferris Industries Medical Waste Incinerator. These waste stations are located close to residential neighborhoods and, since there is no direct access from the highways to the industrial areas, diesel trucks travel on local streets to get from Bruckner Expressway to designated places in the South Bronx like Hunts Point Peninsula. Air quality for residents is therefore significantly lower and more dangerous than other parts of the city because trucks are continuously entering the residential area from the Bruckner Expressway multiple times during the day.

In trying to put forth a motion to prevent an online grocer called FreshDirect from building distribution centers in the South Bronx, the activist group South Bronx Unite filed a lawsuit to address the high asthma rates caused by the company's diesel trucks. Some, including the mayor of the Bronx, support the placement of FreshDirect in the area and argue that the most debilitating condition in the South Bronx is unemployment. Although it is true that FreshDirect plans on creating over 1,000 new jobs and increasing access to healthy food, unemployment does not perpetuate the dangerous levels of asthma in the community. Advocates like Mychal Johnson, co-founder of South Bronx Unite, discuss how the online grocer has been adding an unhealthy amount of truck traffic and diesel; over a thousand diesel truck trips are made every day. The South Bronx is congested with additional high emissions from the trucks, ultimately producing pollution in residential areas.

"We saw [FreshDirect] perpetuating health consequences in my neighborhood. We're trying to answer and create a type of response to these types of projects that are constantly bringing diesel trucks for decades. We don't need trucks for businesses. We need green space and fresher air" (Johnson).

To say the least, fresh fruits, vegetables, and the increasing employment does not change or excuse the overall deterioration in health in the racially marginalized community. The fine particulate matter (PM) in diesel, from the trucks sent to transport the company's food, can penetrate deep into the lungs where it may cause severe consequences to human health. In fact, 80% of NYC's waste contributes to asthma, lung cancer, and heart disease in the South Bronx alone. Healthy green spaces in the South Bronx are also diminishing in places where FreshDirect sends diesel trucks.

In a personal account, Mychal Johnson talks about the effects of the company's negligence on children.

"Children with asthma can suffer with developmental and cognitive problems. My son does not have the same air quality as others. His mental ability may be hindered and this can affect his educational and life outcomes. People need to understand how dangerous and serious these impacts are on our health, especially on cognitive ability" (Johnson).

In addition to that, the dangers of diesel trucks are evident in the increased number of hospitalizations. Hospitalization rates for asthma are 21 times higher in the South Bronx than affluent parts of the city.

The element of racism appears from the fact that poor areas are overwhelmingly nonwhite. In these areas, policies are also less regulated and there is an insufficient maintenance of environmental resources. Poor white areas, however, are more likely to have their environmental needs addressed quicker than poor racially marginalized ones.

People of color are unable to enjoy the full benefits of being heard or attract policy makers to change and enforce policies that accommodate the environmental needs of their community. Instead, they bear the burdens and cost of industrial and corporate policies that cause conditions that reproduce racial inequality by placing hazardous facilities in their areas with insufficient representation and resources. The distribution of pollution is, as a result, discriminatory to communities of color as the response level to their environmental needs is lower than white communities. This makes it harder for people of color to resist toxic exposure or to take part in advocating or speaking up against it.