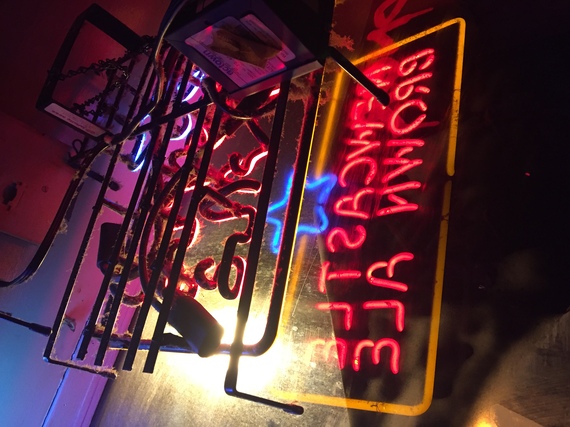 From the opening bell, I'm bullish on cheery bonhomie. Financials are rewarded, the tip jar stuffed with dollars. I spear two fat olives, instead of the usual one, on a toothpick for each martini; a green bonus, a smile on the face of the Wall Street banker. People ask my advice on how to invest their pleasure, choose a scotch for me, which restaurant should I go to around here, point my happiness in the right direction, Mister Bartender.

A bond fails between bartender and customer. His credit card is declined. Capitalism rejects his plastic plea for liquidity. I run it again but NO TRADE. He opens his wallet for cash but the treasury is empty.

Later, I'm in bear territory, a correction in the booming market of male rage. Two guys pull out their claws to settle a dispute over their claim to a girl, as if she is property. The accused is guilty of insider trading in unguarded looks. She's my girlfriend, says the accuser, without reserve, fearing a hostile takeover. The other guy hedges as to whether to throw the first punch. I intervene, a remit to calm the market of love interest.

He's just being friendly, I say, investing securities in the ear of the aggrieved. You can't fight in here.

Jealousy, anger, possessiveness, and the triumph of the self. You'll always find those trades stocked in bars.