After I finish an art piece, it wants to say something.

It's hard enough to get to the point with any creation where you feel that no more revisions are necessary, nothing needs adding or removing. So what is this disturbing, surprising, unfinished sensation?

Sitting with the piece, and with this nagging stirring for just a moment, and it reveals itself.

It turns out it had nothing to do with the finished piece needing another ingredient.

It sometimes happens immediately, at times haunts me in the alpha state just before drifting into sleep. How mysterious, no? The language, the voices are my own, but I assure you it comes from another place, just floating in the cosmos. I feel it fluttering all around me, needing only a butterfly net to capture it.

Here is the story it told me.

It's Lonely at the Top 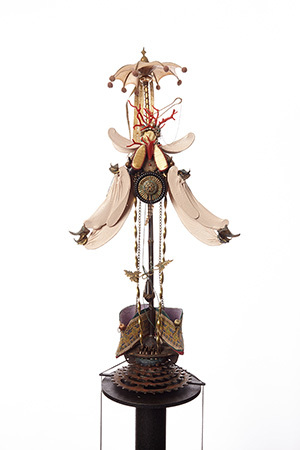 I am the writer and the chemist, the liar and the sinner, the genius and the clumsy, the humble servant Khadim al Selim.

I will tell you my tale, with sincerity in every detail.

Lacking humility, I declare to have been the most popular and beloved eunuch in the history of any Imperial harem. In the service of the great Caliph Al-i Osman, my duties were many but I delighted in them all, and still found time to write in secret (In fact, I achieved some fame under the nom de plume of Al-Rashid.)

I was intoxicated with the rare splendors of my Sultan's court, and became the only one allowed to speak with him in private. I reported to him on the intimate details of his vast harem, and made him laugh. As head of "inner service" of the seraglio I amused my sovereign with innocent intrigues, and directed performances with the 900 white eunuchs in my charge. My most intimate responsibility was the preparation of perfumes; I personally formulated the secret ingredients for each of the favorite fragrances that made them even more beguiling. We tested and fine-tuned the scents in the alabaster hammams, and with each combination of oils I became more indispensable.

I felt I could do no wrong. I amassed a private fortune, and even my weakness for luxury was rewarded summer and winter with the most lavish embroidered silks and furs.

One day it was my vanity that caused my downfall.

I was impatient to try a new garment on, and was careless in leaving my chamber unlocked. I was spied on, and discovered the only secret that was unpardonable: I was not castrated. It's only because of my high post and special privileges that this was possible to hide for four decades.

My world had collapsed. Knowing that the years spent in Oriental splendor, prosperity and indulgence were over, were the least of my worries. I was facing beheading, the traditional punishment for such a crime. In public humiliation I was to hand over the State documents in my custody, and was thrown into a dungeon awaiting my fate.

But I was never to go in front of the harsh palace tribunal, because my Sultan of Sultans took pity on me and visited me in the dawn hours. For the sake of his affection for me he was going to allow me to build a small tower in remote Basra, where I was to spend my days in seclusion. This sentence would have seemed worse than death to many, but to me. Having my rich imagination as companion, intended to I use it for writing books in the serenity of my Tower. I rejoiced, as if it was a reward, instead of punishment. I was escorted out in the darkness of the night with all my luxuries and possessions. My tower according to my plans was built with wings, symbolic of the freedom of my mind.

As I recalled my Caliph's Circassian beauties, I remembered not only their enthralling fragrance, but also the porcelain of their skin, the rapturous volume of their hair, the splendor of their eyes, and the brilliant ringing of their laughter.

I had material enough to publish many books, you may have even heard about one of them, The Thousand and One Nights.

As told by the merry sinner Selim