I had every intention of writing you for your fourth birthday, but here we are, 18 days later, and I'm just now sitting down to write. Time has slipped away from me. I had a plan of what I was going to write here, but today you said something that changed the direction of this letter.

Sitting in the car this morning, Momma and I mentioned something about The Little Mermaid. I don't even know why. We were talking about it in passing, listing it along with a few other movies. But you heard it and piped up from the backseat to say, "I don't like some girl movies."

And while this may seem like a rather innocuous comment, it really, really isn't. It's the sort of thing that has always bothered me in life -- this concept of some inanimate objects being exclusively feminine, while others are entirely masculine -- but it has gotten even more irksome/mind-boggling since you showed up in the picture. These little "innocent" comments add up and begin to define what kind of person you will be, and I (along with Momma) just can't sit idly by and let it happen without having some sort of input.

And so we tell you, "No, bud, there is no such thing as a 'girl movie' or a 'boy movie.'" And while we of course have a great deal of influence in your life, you will learn as time goes by that we humans tend to remember the negative things we hear most of all. A million people will tell you that you look good or are smart or kind, but you'll always think about that one person who said you weren't any of those things. It's our job as parents to try to help you to not listen to those people, but once those seeds are planted, it's hard to get rid of them.

In reality, there isn't a whole lot we can do unless this country changes the way it sees things. I certainly don't have any hopes that the whole country will be reading this letter to you, but I have to at least tell you that these are the things your momma and I are doing our very best to combat. I need you to understand that the loudest voices are not always the correct ones. Our little minority is fighting quite the uphill battle, and it will probably always seem as if no one is actually listening, but that's another lesson certainly worth teaching you: When something really matters, you don't ever give up.

And this matters. Because these are the sorts of things that will shape who you are. Your momma recently showed me something from a man named Jeff Perera, who deals with gender issues in an attempt to "reimagine masculinity." He speaks to students and asks boys what they don't like about being a boy. This list from a group of fourth graders was particularly troubling to us: 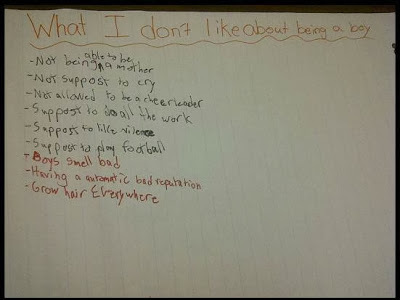 I know a lot of parents worry about things like "how to raise a man properly" and the like. I don't want to worry about that. I don't care about raising a "man." I care about raising a person. Specifically, a good person. Specifically you. You are a boy. I don't even really know how to explain to you why you are one. The simplest explanation is that you have a penis. But there are people out there without penises, and some of them feel like boys, too. And I'm certainly not going to begrudge them that feeling. So, I guess you just feel like a boy; if you told us you feel like a girl, we'd be good with that, too.

The point is that I don't believe there's any one way to raise a boy or any child. Every child is different. And the second we start to say, "All boys need to do this," we run into a whole world of trouble. Just look at that list above again. In this country we have determined that boys have to do certain things, and even little fourth graders start to feel that burden. The list of the trouble we can get into with this kind of stuff is vast. But where would we be if we could just step away from all that gender stereotyping?

So, without further ado, I tell you this: Nothing should be defined as a "girl thing" or a "boy thing." There are just "things." They are not gender-specific. A movie or book about a female character is not intended solely for a female audience. And even if it is, it doesn't mean a boy can't (or shouldn't) read it. I bet when you're able to read, people will still be reading Harry Potter books. And I also know that most people don't think twice about a little girl reading those books. But if you wanted to pick up Harriet the Spy, a book about a girl, someone might ask why you're reading that "girl book." Don't listen to that person. If you like that book, if you want to read that, then do it.

Pink is not a girl color. Blue is not a boy color. Do you like the color? Then you like it. So it's a Merritt color. Nothing more, nothing less. There is so much history with regard to colors, so if you do a little digging, you will find that pink has been regarded as a male color in the past, and blue has been a female color. The point is, these things change over time. So, maybe the best thing we can all do is just stop assigning colors to a gender, huh?

Sometimes you're going to fall down and scrape your knee. Or you'll get dirty. And someone might say to you, "Oh, you're such a boy." But I bet if you look around you'll see a girl with a bandage on her knee and a head full of more dirt than matted hair. That's because kids -- all of them -- tend to get scraped up and dirty. It's pretty natural. You play outside a lot. Your motor skills aren't fully developed. You're exploring and trying new things. These are not traits specific to little boys. So, instead of being "such a boy," I counter that you're just "such a kid."

There will be things that make you sad in life. And you'll feel like crying. Please don't believe anyone who tells you that it's not OK for you to cry over them, but that it is OK for that girl next to you to cry. Tears are a natural occurrence. Emotions are perfectly normal. Expressing them -- in any way you see fit, as long as it's not hurting someone else -- is the only way to truly be able to move on from the situation that has upset you. It's healthy. It's normal. So, if you feel like it, cry.

Tonight, Momma and I watched a show that featured some advertisement for a kitchen product. The person introducing this product referred to the fact that "moms" love to use it in the kitchen. Momma and I both heard this and wondered why anyone would approve that text. "Moms" aren't the only ones who cook. They aren't the only ones who nourish and nurture families. Boys can (and do) perform those tasks whenever they feel like it. Your momma is a great cook. I hope she will teach you everything she knows one day. The fact is, some of the most famous chefs in the world are men. So, let's get past the notion that the only people who belong in the kitchen are women. You can be there, too.

I love you so much, Merritt. I love that you can sit on your grandfather's lap and comfort him when he cries over a death in the family. I don't want you to ever be the sort who believes that kind of emotion makes a person weak. Right now you are so perfect and accepting of the way the world works, but you are also inherently curious, and I hate to think that you will run into people who will shape that worldview in the wrong direction. Please stay that sweet boy who cares about how other people feel, who comforts them when they don't feel well, who is always so generous with his kisses and hugs and "I love yous." If you can always be that boy, you will be the strongest and best man I've ever met.

This piece was originally posted on Funerals for Dinosaurs