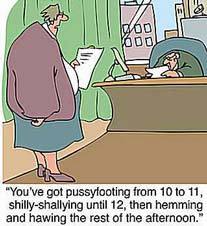 If you want to know why people are frustrated with our national government, the Obama administration gives you a case to add to what George W. Bush and Dick Cheney left in their wake. It's why people are sick to death of both political parties. Then there is Congress, who actually voted in favor of keeping the big banks big, against all evidence that doing so makes our entire monetary structure more unstable. It is incompetence and sheer stupidity of not learning lessons and taking advice from commissions, which are forced on the American people, because Congress won't do their jobs either.

Faisal Shahzad was put on the no-fly list at 12:30 pm ET. According to an "administration official," Shahzad got on the plane because Emirates doesn't refresh their system often enough, so his name wasn't seen, but federal authorities evidently lost him before then. But because of built-in redundancy Customs and Border Protection caught the name and ordered the plane back, or so the story goes, though officials have backed off the Pakistani Taliban link as of today.

Complicating matters you have 9/11 commission co-chair Lee Hamilton, a Democrat, whose only purpose is to tell the truth about continued federal incompetence, even after recommendations have been given and plenty of time to put them into place has passed.

Hamilton reminds ABC News that "the 9/11 commission recommended that you had to have biometric evidence, documentarian evidence of people coming in and exiting" the country. "We've done a pretty good job on the first part of it people entering the country. But with regard to those exiting the country we simply have not been able to set up a system to deal with that and it showed in this case."

Hamilton says "we need to have in this country a system of checking people leaving the country so that we can protect against the very sort of thing that happened here -- or at least almost happened here."

To broaden this out to a larger point, which I've been talking about a lot lately, the big two parties are failing this country horrifically. It's politics over competency at every single point, including where our domestic security is concerned. Politicians line up on their side to push their ideology, as well as their political bankers' interests, whether we're talking Wall Street, insurance companies, oil companies (BP can boatloads of cash to Obama, as did Goldman Sachs), nuclear industry (big giver to Obama), you name the corporate special interest, in lieu of what is in the public's interest.

The big two parties are collapsing under their incompetence, corporate dependence and lack of integrity on issue after issue. It revolves around the notion that Party First is the way to go. Politicians disagreeing with this motto forced to suck it up even when they're selling us out. Is there any better example than the "progressive movement" on this one? It's especially true of the "pro-choice progressive caucus," whom Nancy Pelosi, Bart Stupak and Barack Obama rendered irrelevant, because these so called "progressives" wouldn't stand up on principle.

It's why, even though I'd never support him, I'm thrilled to see Charlie Crist go independent. Even though it's self-serving, because Crist wants to stay a public person in politics, it's a sign of the desire to serve the people over party as well. Arrogance comes with politics, but service is intertwined with the bravado that leads men and women to believe they have the answers to solving problems.

The national political failings of both parties and politicians representing them are also tied into the press, who takes political sides when delivering the news, which goes for traditional and new media alike. Ben Smith had a post on this earlier this week, citing the Washington Post's liberal online tilt with David Weigel, Ezra Klein, and Greg Sargent; never mind that their editorial page is hard right. It's the Post's tilt, as well as other online magazine's political pandering to the powers that be, often due to the rise of access journalism coupled with monetary necessity, that is just one instance where press bias is part of the problem, not the solution. However, that's the norm, with new media outlets, especially tiny companies like mine, being financially starved out, our futures very uncertain. That the Post is putting Newsweek on the selling block is a result of the changing press tides.

Then there is the marketing and selling of the news. If Fox News Channel can co-opt "fair and balanced" and actually believe it, with MSNBC going left as they see it, even going so far as having Keith Olbermann co-opting Edward R. Murrow's sign off even though he hardly resembles the man's professional prowess, with CNN faltering badly, thus talking again with CBS, as blogs line up on one political side or the other, there is hardly any room for objective reality anymore, which used to be the standard. If you don't take a side you're not seen.

It's easy for me to say this, because I come from a hyper-partisan background of writing and reporting myself. I can smell bias in a hummingbird's heartbeat. I've also come to the conclusion that it's the inability to decipher the partisan doublespeak that is leading the American people to their cynicism.

"The basis of our government being the opinion of the people, the very first object should be to keep that right; and were it left to me to decide whether we should have a government without newspapers or newspapers without a government, I should not hesitate a moment to prefer the latter" - Thomas Jefferson

Access journalism predicated on monetary necessity in a country where politicians and leaders are beholden to globalized corporations leaves very little space to keep things right between the people and their government.

Lack of trust in government and the press has led to massive cynicism and is why voters who used to be Democrats and Republicans are going Independent, and why the Tea Party is rising up even if they don't exactly understand why, which isn't always a pretty reason, as the still affiliated wonder why they bothered voting these incompetent bunglers into office in the first place, wondering why it's worth voting in 2010.

That Pres. Obama, Democrats and Republicans continue down a dead end path doesn't surprise me. But it has made me more skeptical than ever of the big two political parties, but also the press, at a time when we need the latter to police the former in a way that was done during Nixon's era, because the politicians and our corporations are robbing we the people of our country.

A biased, access press, who prizes getting cozy at swanky cocktail parties, is helping them do it.

We live in an era that has rendered political ideology more important than competency. Where marketing means more than making a difference we the people can see.

We got lucky with the Times Square failed terrorist attack, primarily due to the competence of the New York City anti-terrorism infrastructure, including citizens who have experience with this horror.

We didn't get so lucky with what looks like criminal negligence by the conglomeration of incompetence between the federal government, corporations, and political hacks who still stand today to hawk oil drilling at a moment in time when our entire Gulf coastal region may collapse because of corporate greed and political coziness with corporations that are taking this country in a direction that minimizes we the people even more; the same politicians who voted against breaking up the big banks, because they pay their way to Congress.

There's a reason people don't believe in their government or political parties. It's because Party First politics has led to sheer incompetence, something that manifested recently in Arizona's reactive new law, which made a mockery of any Cinco de Mayo celebration you may have enjoyed earlier this week.

6 Years Before George Santos, Trump’s Endless Lying Made Him President