The line between quirky and weird seemed to be stuck between my fingers. That feeling when you eat a donut or an ice cream cone and the residue makes your fingers so sticky that you desperately want to find a sink? That's how they felt. Licking them would help -- for a few minutes. Little kids are sticky, and I spent a lot of time licking between my fingers for momentary relief. It drove my parents crazy -- we'd be in a public place, and there I was licking my hands like a compulsive cat. Seams of socks and waistbands constricted, so I turned my socks inside out, and wore my pants around my hips to free myself from their ever-present annoyance. Things just felt wrong and it was a puzzle to make them right again.

A local meteorologist came to speak to our class during tornado safety week. I started sleeping on the floor if thunderstorms were even in the forecast. I decided attaching my childhood stuffed monkey to my wrist with my security blanket would protect me -- would actually prevent a tornado from happening. My weird kid brain anthropomorphized a wide variety of inanimate objects, including this monkey, to the point that I felt real guilt for asking him to protect me. The line between quirky and weird was now stretched between my arm and this silent sentry in red overalls.

"It was around this time when I became aware that maybe some of these things weren't completely normal, so I got better at hiding them. "


It felt much more comfortable to come up with my own ways around the fear.

I had an unfortunate childhood affinity for non-fiction shows where people die painfully and tragically. Oh, Saturday morning cartoons are over? I guess it's time for 100 Ways to Die in a Fire, or When Cuddly Bunnies Attack. After an Unsolved Mysteries dramatic reenactment showing a family murdered at 4:11 a.m., I realized that I wasn't safe in my own bed. Especially not at 4:11. If I woke up anywhere near that time I would lie awake, gripped in panic. Wait. Was it 4:11? Or was it 5:11? Best to be scared of eleven minutes after any late-night hour.

Eventually the exact time just served to regulate the level of my fear, and the simple act of being awake when everyone else was asleep left me envisioning people standing over my bed with knives, or climbing a ladder to my window, or rummaging around downstairs. I had to stay absolutely still, they couldn't know I was awake. Soon I began to make a morbid game of getting to sleep before the hallway light went out. As long as other people were awake I felt safe, but as soon as the house settled into silence my brain filled with all of the bad outcomes stalking me in the night.

What do you do when there is no way out? When fears you know are not entirely rational won't let go?

I prayed. The details hanging like a blade over everyone I loved. It was my responsibility. I was never particularly religious, but something was waiting to punish me based on arbitrary guidelines that shifted each night. That much I knew. Then I called it God. Now I call it the universe. Superstition. Making things feel right when everything felt wrong. I slowly built a repertoire of the exact words that would keep people safe. I begged. I begged and begged. I begged x3. And so on. The exact number ever increasing, the time spent ever lengthening. Please. Please please. Please times infinity plus infinity please.

"I think the other side of the bridge is gone!"

"I see cars coming the other direction," I answered, with a roll of my eyes. This was one of my dad's favorite games to play on our way to the beach.

Once our towels and blankets were spread out, we would follow him into the water. He didn't see all the "what ifs" circling around my head as he dared the waves to crash over us. As he pretended to spot sharks. What was all in good fun for most kids left me terrified because I was never quite sure. I felt like he was taking a pretty big risk, daring the universe in these ways. I didn't blame him, I just didn't think he understood how the universe worked.

"Superstition built; any wrong move had to be countered by an action or thought to make it right."


I instinctively knew when I had achieved rightness, so I mostly let myself be led along, stopping to appease the universe as it saw fit.

Knocking on imaginary wood, counteracting positive thoughts with negative, and vice versa. Balance. Everything needed to be balanced. If one side of my face itched, both sides needed to be scratched. If I brushed something with my right arm, I needed to even it out with my left. I searched for completion, and knew when I found it. Her Fearful Symmetry, indeed.

I always felt one terrified misstep away from doing something unforgivable. Something that would make me a bad person. The intrusive details no longer matter, because they morphed to follow me through each compulsive ritual created to destroy the fears.

I traded obsessions and compulsions on my own personal anxiety stock market. Apologizing to dead animals on the side of the road to assuage my guilt. If my brain momentarily mistook another object as an unfortunate animal I would play a game of chicken with myself. Why did the chicken cross the road? I don't know, but that's not a chicken, that's a tire, and I am not going to apologize to a tire. I always lost. Sorry tire.

"Actions and thoughts demanded my attention, even when I wasn't sure why. "


I felt like I was always in a battle with my brain for control, and I was in a no-win position, with even the simplest decisions carrying far more weight than necessary.

It wasn't just a quirk of annoyance when details were wrong, it was closer to physically painful. Not all details, I wasn't a control freak. I didn't have to have every single aspect of every situation just so - but the stuff that mattered ... mattered. A lot. If I didn't fill my gas tank all the way or opened my browser tabs in the wrong order something bad would happen.

Most important was never letting the universe see me making proclamations. Always recognizing its power over my life, and never assuming benevolence. Phrases like "I'd rather die than..." or "I can die happy if..." had to be followed with assurances to the universe that I did not really mean it. The universe doesn't have a great sense of humor, and it certainly doesn't understand sarcasm. I tried to be very clear, leaving as little room for misinterpretation as possible.

It's uncomfortably ironic to be a person to whom logic is so satisfying, and yet be guided by these deeply illogical and irrational fears. Feelings of being entirely unimportant and yet utterly responsible for everything intertwined. I was always trying to outwit a universe that does not give a damn.

I've written these few small slices of the big picture as past tense, though plenty remains. I still get in my own way; finally seeking help and then taking eight months to broach the topic. I handed my therapist a list of all the ways I step over the line from quirky into disorder. Fear crept into my peripheral vision. What if I'm exaggerating. I wanted to disappear into her couch as I watched her read my words. I'm not scared of germs. Better to just suffer than to risk being wrong. I don't spend hours checking things.

And then... relief. Followed by determination.

Now I pick my battles carefully.

I still argue with myself over the need to apologize to dead animals, but I no longer have to fight against apologizing to tires or old t-shirts or single discarded shoes. I still battle with the universe and my expectation that it is just looking for an excuse to ruin everything. I still seek balance. But I can recognize these moments for what they are; battles lost and won as the war wages on, small victories and emotional scars finding a balance all their own. 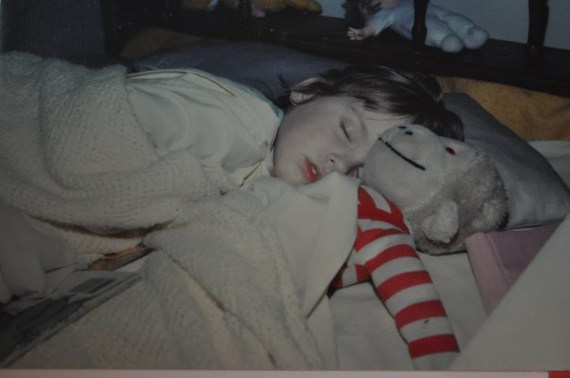 Rhiannon Giles is an overwhelmed mother of two small children who she only occasionally considers giving to the circus. She blogs regularly at rhiyaya.com. To keep up with new posts, and see some of her favorites, join her on Facebook.