What makes startups succeed or fail? More than 90% of startups fail, due primarily to self-destruction rather than competition. For the less than 10% of startups that do succeed, most encounter several near death experiences along the way. Simply put, while we now have some good theory, we just are not very good at creating startups yet. After 50 years of technology entrepreneurship, it's still an art.

Three months ago I wrote about my ex-student Max Marmer and the Startup Genome Project. They've been attempting to quantify the art. They believe that they can crack the code of innovation and turn entrepreneurship into a science if they had hard data rather than speculation of why startups succeed or fail. Max and his partners had interviewed and analyzed over 650 early-stage Internet startups. In May they released the first Startup Genome Report -- an in-depth analysis on what makes early-stage Internet startups successful.

Now 90 days later Max and his team have gathered data on 3200 startups and they believe they've discovered the most common reason startups fail.

Today you're invited to benchmark your own internet startup and see how you compare to the winners. 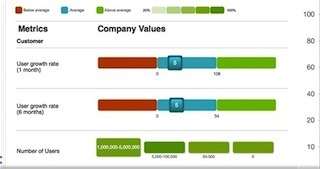 ------
Benchmarking Your Startup
I hadn't heard from Max for awhile so I thought he took the summer off. I should have known better, it turned out he was hard at work.

The benchmark takes 20 or so minutes to go through as series of questions, and in the end it spits out an analysis of how you are doing.

The benchmark is not perfect, it may even be flawed, but it is head and shoulders above what we have now -- which is nothing -- for giving Internet startups founders specific advice on best practices. If you have a few world-class VC's on your board you're probably getting this advice in person. If you're like thousands of other startups struggling to get started, it's worth a look.

It's Not How Big It Is -- It's How Well It Performs
If you're interested (and you should be) in how you compare to other early stage ventures, they summarized their results in a report "Startup Genome Report Extra: Premature Scaling."

One of the biggest surprises is that success isn't about size - of team or funding. It turns out Premature Scaling is the leading cause of hemorrhaging cash in a startup -- and death. In fact:

Turns out his birthday is in a week, September 7th.

Steve Blank
Author, 'The Startup Owner's Manual' and 'The Four Steps to the Epiphany'

Customer Development Startups Entrepreneurs Innovation Entrepreneurship
This Blogger's Books and Other Items from...