Sunday, March 13, 2016 is a day that will be remembered for witnessing the largest anti-government demonstration in Brazil.

Approximately 3.5 million people, according to police, took part in protests across more than 200 Brazilian cities. The protesters were mainly denouncing President Dilma Rousseff and her Worker's Party (PT). (Some organizers claim that close to 6.5 million people joined the protests.)

More than 1 million people joined the protest in São Paulo, Brazil's largest city, according to the Datafolha polling company. This marks the highest protester turnout since the late 1980's, when Brazil fought to end military dictatorship.

The streets said their piece: they are sick and tired of the corruption, and they are grateful for Operation Carwash, an investigation into the corruption scandals associated with Petrobras, the state-run oil company. Politicians from all the major parties were involved.

Judge Sério Moro, who has presided over the investigation, is responsible for arresting and convicting contractors, businessmen, and politicians associated with the scandal. People all over the country publicly praised him, even those who had been skeptical. People are happy to see an end to impunity. 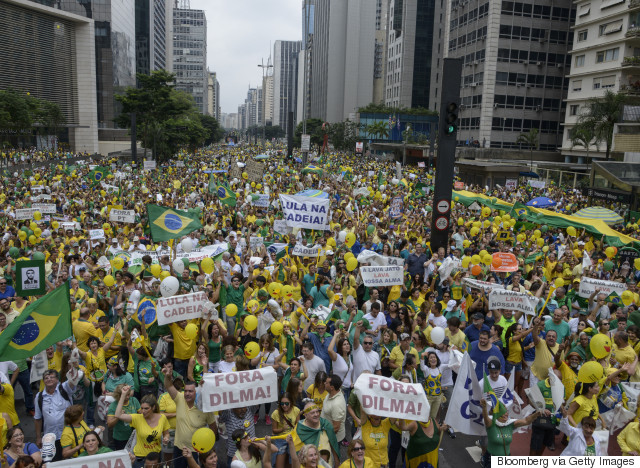 Demonstrators wave banners and flags during a protest against Dilma Rousseff, Brazil's President, and the ruling Workers Party in Sao Paulo, Brazil, on Sunday, March 13, 2016.(Paulo Fridman/Bloomberg via Getty Images)

Dilma Rousseff has not been proven guilty, but her party is heavily involved in the crimes being investigated by Operation Carwash. People came out to protest against her party and former president Luiz Inácio Lula da Silva.

Lula's response to being detained by the Federal Police was to urge the Worker's Party's to defend him, which has only angered those who want to bring him down.

It's not only the elite who are mobilized; the middle class and portions of the lower class are also participating in these protests.

Key opposition figures, such as Senator Aécio Neves, who ran for president against Rousseff, and the Governor of São Paulo, Geraldo Alckimin, were silenced and booed by the protesters in São Paulo.

Eduardo Cunha, the leader of Congress, who lied about his bank accounts in Switzerland, has been investigated for receiving bribes. He was also denounced by the public.

Despite what Lula and the Worker's Party try to portray, it's not only the elite who are mobilized; the middle class and portions of the lower class are also participating in these protests.

The movement came from the streets. Workers have been affected by inflation and high interest rates. The growing number of unemployed citizens is the result of the worst recession Brazil has seen in 25 years. Entrepreneurs and owners of small and large businesses are anxious, and they find it difficult to envision new investments or growth. 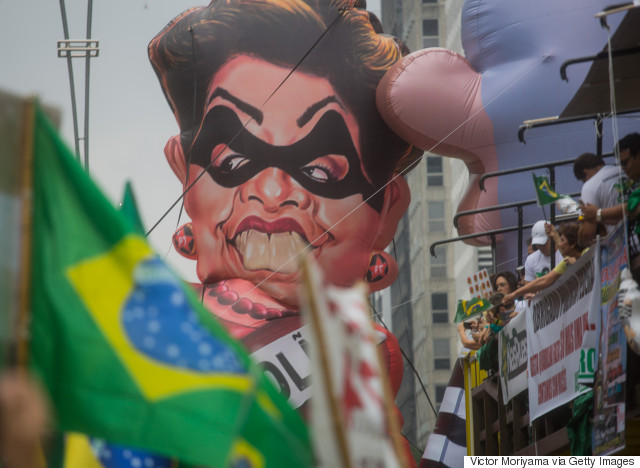 There are no signs of short-term improvement in economic policy; the government's political inability to adopt fiscal adjustment measures in Congress also complicates the chaotic scenario.

This is the reality of those who took to the streets on Sunday; they represented all social classes, places of birth and age groups.

These protests will continue to weaken the Worker's Party.

The president has been attacked from all sides. Even the PMDB, Brazil's largest party and a former ally of hers, has denounced her. March 13 is just the icing on the cake.

In the aftermath of the June 2013 protests that shook the country, Rousseff announced a series of agreements, which included fiscal responsibility and political reforms. She also promised to hire more doctors and to improve education and public transport. Rousseff's media manager, João Santana, helped her compose the package. Santana was later arrested in Operation Carwash investigations. Lula also helped Rousseff; he is currently being investigated by the Federal police, the Federal prosecutors and the public prosecutors of São Paulo.

The president is currently isolated; she has failed to accomplish many of the promises she made three years ago, and she is under the scrutiny of Congress for breaching the Fiscal Responsibility Law.

It will be up to the president to create a final survival strategy, even with little political or popular support.

Or, she must finally resign.

Editor in Chief at HuffPost Brasil