It's not my fault.

It's not my fault that South Africa is corrupt.

It's not my fault that gang wars and criminality has swept through the town in Sweden where I'm originally from.

It's not my fault that terrorists are bombing the world and the city I used to call home. A city that still feels like home.

It's not my fault that people are suddenly scared of different nationalities because certain groups of people are infusing the world with fear.

None of that is my fault. So I could just tell the government and police to handle it, whilst I moan and get angry because I still see problems.

I can work myself up about the problems. See the end of the Europe I used to know. Get furious about my friends in South Africa who suffer due to the corruption, the lack of education, the drugs, the...

I can get really angry and miserable thinking about all that.

I can also turn my back entirely. Focus on my life and my life alone.

Lastly, I could focus on the positive in the world and what I can do to contribute to that.

There is this Aesop fable. About a tree that said it was OK for the woodsman to cut down every last tree around him until only he was left. Really, it wasn't his problem. Then the woodsman cut him down too.

Then there are those that find a vision. A vision they'd like to see become a reality. A vision for a better tomorrow.

It's a vision for a better tomorrow, but it's not a radical vision. It's not a vision that demands other people choose their religion, or political party. No, it's more of a "treat thy neighbor as thyself" kind of vision. They have a vision for kindness.

As it is their vision they set about making it a reality.

They simply get up and do something. They don't necessarily dedicate all their time to it, they just fit it in where they can. So that they can have the joy of seeing their vision become reality. If so, only around them, not in the entire world.

They decide to start mentoring a child at risk. One of those kids that could grow up to become someone part of a gang, someone corrupt, someone willing to bomb the world if it doesn't hold the same beliefs.

They decide to make friends with someone outside their own circle. Form bonds with strangers to build a stronger community.

They decide to start teaching a class, or hosting a club (like a drama or book club) where people from all parts of town can come together. Where bridges are built and friendships formed.

These are the people who realize that if everyone did this -- forged friendships and educated people from a young age -- there'd be no wars. No matter what the politicians say.

There are many wars you don't start, but which you will end up smack in the middle of. Many situations you didn't create, that you suddenly find yourself caught up in. It's your choice whether to be bitter, or proactive so as to try to prevent it from happening again.

It's not your fault you were born into a world filled with horrible things, but it's your choice if you will stand up to try to make it a better place, if you will reclaim the streets, or go hide away and watch the mayhem from afar. Until you end up the last tree in the woods.

I want to dedicate this article to Liezl Mathews -- a woman who lives smack in the middle of poverty and still stands up to fight for herself and those around her. Below you find a thank you speech I wrote for her when we opened a new charity recently; the Proudly Hout Bay Women's Forum. 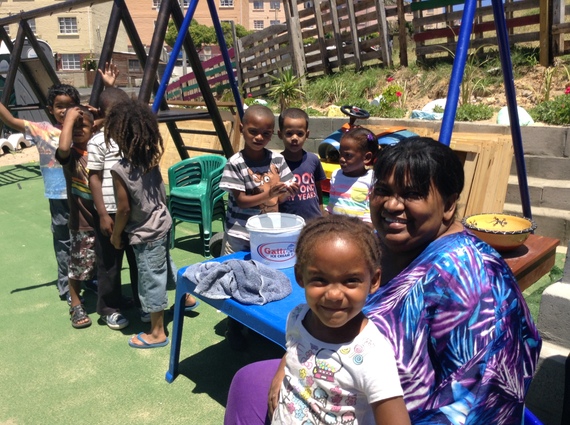 I'd like to finish today by thanking the founder of this project, Liezl Mathews.

People still blame apartheid for the problems in this country today. Apartheid was terrible. It was a crime against humanity. But apartheid is gone.

People blame the DA and the ANC for the problems we face today, but they are not the ones dictating how you live your life. And if you looked a little closer I'm certain you'd find there are incredible people in both political parties.

People blame corruption and I'm sure all of us have been angry because of corruption at some point. Because of people stuffing money in their own pockets instead of into society or bribing the police so they can continue their crimes. But corruption does not run your life.

The truth is, we create our own lives. And for the past almost three years I've seen Liezl Mathews run Little Angels and most recently starting the Women's Forum.

Liezl started Little Angels out of her own home with no funds because her sister had just died from cancer and she swore to look after her kids and grandchildren. And around that time her own kids found tik on the street and almost ate it. So she swore to make a difference for the children of this community, protecting them from tik, crime, violence, prostitution, gang wars...you name it.

Liezl had nothing. No money. No organizations backing her. No nothing. Yet she is now looking after close to 60 kids in the creche, 30 youth and 30 after school kids. And whilst we still don't have more than shacks to run it out of, the center is growing. Which shows love works greater miracles than money.

Now Liezl's started the Women's Project and look at how many women there are here today. Women crying out for change. Women filled with strength and determination.

Liezl faces severe health problems, she's paid 500 rand a month, which, needless to say, isn't enough to feed her family, and she's still making a difference. I've been with her when she couldn't sleep, when she couldn't walk, when her relatives died, when many of our friends faced relapses into drugs as they'd been abused, when staff fell ill to cancer and we had no money to feed them, when people black mouthed her...I've seen Liezl through all of this and it astounds me that she's still walking. But she is.

Liezl is making a difference. No matter what challenges face her. And the truth is we all can.

We can all make a difference.

If we all acted like Liezl has and still is, Hout Bay and, indeed South Africa, would be different.

You can blame poverty, the government, corruption and apartheid, but those are lame excuses. Because if everyone got up like Liezl, we'd have a different South Africa.

And I believe in everyone who is here today. Even if I don't know you all, I believe you, like Liezl, are fighting to make a difference, but today I'm thanking and honoring Liezl, because she's the woman I know and the founder of this organization.

So from the bottom of my heart I'd like to thank the woman who's changed my life in more ways than I thought possible. And I'd like to end this launch with a standing ovation for her. So everyone please stand up to thank Liezl and to show that you are going to be with us in making a difference. In creating a better South Africa.