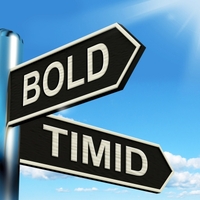 I like to occasionally check out the West Side Rag, this local blog listing all the restaurant openings and closings and health code violations and weird crimes that happen on the Upper West Side. And I saw this story, about a woman who had a crush on a neighborhood guy when she was 19 years old and new to New York City. She thought he was so hot. She dubbed him "Teen Idol."

And then she did not a damn thing about it for 20 years.

That's right. The occasion for the story isn't just that this woman stalked him all over town, but that she wistfully watched him from afar, living his life, until one day, like a year ago, she spotted him in a building where he was working, and where she would be coming regularly. So, you know, she finally got up the nerve to introduce herself. Two decades later.

And just the other day, they got married in Central Park. That's great! It's also a crying shame.

Seriously?! Maybe the journalist took some liberties; maybe the woman thought he was cute but wasn't that interested. Maybe she was involved with someone else 15 of the past 20 years. The story doesn't say.

But what I do know is this—she waited until she was 39 to grow a pair. OK, so maybe she might have made a move when she was 22, and he may not have been ready for her. Or OK, they could have gotten together, had a hot thing going, and flamed out before either of them hit 30. Doesn't matter. You can call it fate, but I call it crazy.

My problem has always been that people say, "Ah, if it's meant to be, it will be." But I couldn't disagree more, because that's like playing a chess game with fate and deciding that in order to win you won't move any of your pieces around.

My question to you is this: You see someone who appeals to you, even a little? What on God's earth are you waiting for? This city, and most cities, are crawling with people, and the continual churn of randomness of it all is such that you just may not get this chance again.

You say, "Oh, but I don't want to have to ask a guy out." (Men, you have no excuse. Man up.) But ladies, you don't have to do that. But you do have to swing that door open so he knows you're there and that he's welcome to walk through. And I can't tell you how many times it's paid off (many). Including my last serious relationship, which happened because I left my card behind and he followed up.

I'll admit, even I choke sometimes: I was playing touch football in a Zogsports league as I do in the spring and fall, and I spotted a cutie, but was like, Jesus, what the hell do I do? Walk up to him at 3pm on a Sunday and ask him out? That's weird. Hit on him in front of his friends as they change their shoes? No. So I didn't do anything. Like a dummy.

Then...last game of the season, guess who we're playing. Yup. It was a tense game, overtime, the whole thing. We win. Long story, I was late, so I hadn't played this game, but you better believe I jumped in to do the whole "good game" hand shake thing. And when I got to this handsome fella, I shook his hand and smiled and said quite simply, "You're so cute." I said it with a big smile and a silly energy, since it was a high-energy game and I just went with it. "You're cute, too," he said. "Well, I regretted not telling you that the first time we played you," I said.

His reply? "Want to get a drink sometime?"

Yes. Yes I would.

Truth is, he could have said, "Oh, that's sweet, but I'm married," or "Why thank you," and then nothing. Who cares? What do I lose by doing that? Nothing. How am I supposed to know what his deal is. It's the most blissfully ignorant moment of all. Worst case scenario? He is blushing and flattered and you made his damn day.

Bottom line: Do not wait around and stare at people from afar. Make yourself known. Or you'll find yourself hobbling toward some old hottie in the nursing home, saying, Didn't you used to eat at Ray's Pizza in the 90s? And then your dentures will fall out of your head.

(Read also: How to happen to the hottest guy in the room.)

Got a serious dating block? Overhaul your dating mindset and your love life with my seven-day online course, Stop Hating, Start Dating. And visit territrespicio.com for more content like this + to sign up for my newsletter and receive a free copy of my e-book "Take the WORK Out of Networking," about how to make better connections in business and in life (it totally works for dating, too).