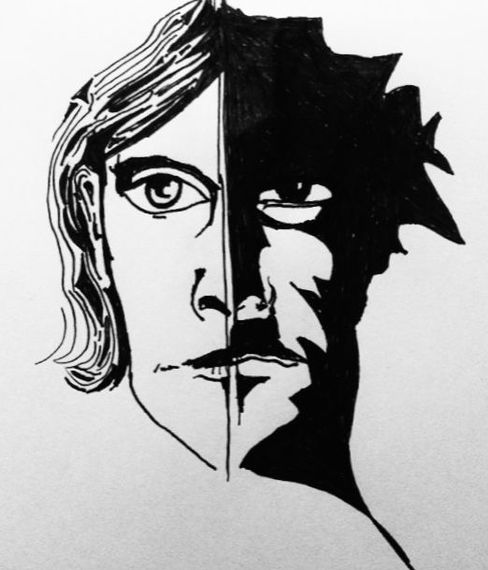 It is the age of the Internet; the time of virtual ubiquity where everyone can be everything and everywhere and know all things at once. We've heard stories of people living separate lives online, of suffering so immensely from social awkwardness or introversion that they've taken to the web to lead an unrestrained, anonymous existence. The Internet has become an alternate universe, in essence; if things aren't tangible in this life, in this dimension, then go online, surf the solar waves of a medium impervious, and find solace in the delusion that the grass is always greener in high pixelation.

As a millennial, I came of age just as the Internet was starting to gain momentum. Middle school social life sprang heavily from your AIM profile, and high school romances percolated from late night chats online, only to vanish come the morning light.

We've seen the way the Internet has changed social interaction, how online dating is becoming the norm, how music and art and writing are more accessible now than ever. But an element to the Internet has gone seemingly unnoticed by mainstream criticism (and perhaps this is because it is a proverbial speck on the larger, more dirtied window of anti-social media discourse). Regardless, it is something that has begun muddying my newsfeed as of late, and is thus something that I think deserves some attention: I've termed it the Jekyll and Hyde-syndrome -- the phenomenon of being one person in real life and another online.

Social media inarguably perpetuates vanity, as online profiles are essentially self-promotion sites, allowing people to share everything from the mundane to the pivotal life milestones. I am not trying to denigrate social media, by any means. I think in many ways it has done wonderful things for people, and has become a pertinent community building tool. However a tool, no matter its effectiveness, can still be misused.

Typically, if I meet someone I don't like, I won't follow them on social media. But what do you do when you meet someone you like; when you hang out several times (either resisting the urge to Facebook stalk them, or finding that their pages are private) and begin to develop a real connection to them? As a young person in a new city, finding people like this is rare, which just exacerbates the complete deflation I feel when I finally do follow these people on social media, only to see their insecurities gleaming through their self-endorsing posts and their potent efforts to expand their lives past their natural perimeters.

This one girl I know seemed lovely the first few months of our friendship, but we then became followers of one another on Instagram and I noticed she posted a lot of selfies. I tried to dismiss this, as hey, it's not like they were "glamour" selfies; normally, she was doing weird faces or wearing absurd makeup. After a while though, it became an everyday irritation -- I would wake up, make coffee, check my email, and invariably see several new selfies posted by her during the night. One week she deviated from the facial shots and moved downward, posting a photo of her gnarly foot, grandly declaring that she was no longer self conscious of her misshapen toenails. I was baffled to a new extent: of all the revelations that would surely come to her that day, how was this the one to make the cut?

I have another friend who, soon after our virtual worlds collided, began taking over my newsfeed on Facebook with long-winded "stories" about the unexpected adventure she had that night, or the wonderful day she spent in solitude by the lake. I understand that people update the social media world on their whereabouts, their doabouts, wanting to publicize the variable nature of their everyday routine. But it seemed that this girl had a different motive, her posts suggesting that she was trying to create a narrative from these fairly commonplace activities as if each status update was a brief chapter in her novel of self-appreciation.

I continued seeing these people for a while, but soon just found myself in a constant state of utter confusion, oscillating between loving the way I felt about them after a dinner out or a drive around the city, and absolutely despising them an hour later when they'd post an infuriatingly inane update or upload a picture of one of our excursions, imbuing it with so much frilliness, that it became untruthful. There was no doubt now -- they were exploiting real experiences for the sake of a shinier, online version.

So what gives? Why are these people so seemingly strong and beautiful and creative in real life, but so ugly and self-absorbed on the inter webs? Wouldn't one think that their wonderful qualities would translate well to social media code? Isn't that how it should work -- you put cinnamon and sugar and hilarity in one tube, and out comes... the exact same?

Validation is partially to blame. When you post something online, the people who disagree with it generally either keep to themselves, or write scathing, overwrought essays like this. The haters will typically not publicly express their dissidence, therefore making the only materialized feedback positive. Studies show that the human brain will actually release endorphins at the sight of a red "notification" sign on Facebook. Sad, but true. This means, that even on a medical level, we get a rush from approval; that even subconsciously, we seek affirmation. It would seem that even the best of people are not resistant to this Internet-induced chemical release.

Compounding this quest for acceptance is the contemporary compulsion to create an online identity, made possible, of course, by the Internet. Along with enabling us to order groceries, watch movies, and even peruse the dating world with a mere click of the mouse, the Internet also allows us to take unprecedented control of the way others perceive us. So although these people I met who seemed great in real life didn't appear overly-expressive or coiffed in their everyday demeanor, they exercised a certain level of discretion when creating their online profile, either omitting the mundane or infusing it with artificial flavors in the hope of making it seem unique.

So what am I to do? Which "self" do I consider? Is it absurd that I am even deliberating on whether to sever a friendship based on a virtual alter-persona? Maybe, but it's also indicative of how much our social structures have changed with the advent of social media. Does it seem as irrational as becoming angry with someone over a dream you had about them? Yeah, it kind of does, because dreams aren't real, and some would argue that the Internet is similarly void of reality. I don't know if I am qualified to speak on behalf of the Internet's illusion, or conversely, in defense of its actuality. I suppose all I know is that I will probably forget to respond the next time they text me, and I will likely "hide" them from my newsfeed when I decide I can no longer manage the level of self-glorification. And when the day comes when I receive a message from one of these fantastic people with terrible Internet voices that asks where I've been, would I like to hang out? I will inevitably sit there awkwardly, stare at my screen, and through the ease granted by the Internet, may very well not say anything at all.