Something suspicious is going on in the media coverage of car fires this year. Three Tesla Model S cars caught on fire this year, all due to high-speed impacts. Not a single person was hurt. By comparison, the U.S.A. has had more than 250,000 gasoline car fires in the past year and a half. Those gasoline car fires resulted in over 400 deaths and 1,200 serious injuries. (extrapolating 2012 NFPA data) Which fires did the media decide to focus on? Which fires generated more headlines than all the others combined? The three Tesla fires that resulted in a grand total of zero deaths and zero serious injuries, of course.

Seems a bit strange, doesn't it? I think so, too. Perhaps I am paying more attention, because I am one of the 19,000 people on Earth that are driving a Tesla Model S, a car that has received the highest safety rating possible. It is the safest car in America, or anywhere else in the world: There have been zero deaths or serious injuries in a Tesla Model S worldwide due to a fire, or any other accident. 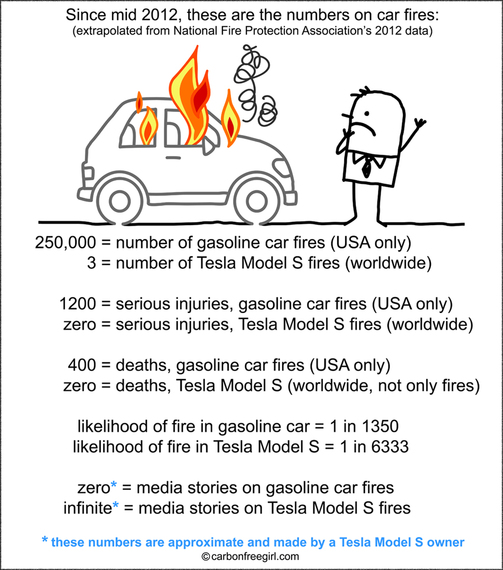 But, based on the number of headlines, three fires with no injuries provoked, I can't help but feel like there are other powers at work here.

Let's step back and look at the big picture. Up until now, there has been no serious threat to the world domination of the oil industry and the internal combustion engine. It's a system we have been forced to use because of the simple fact that there has been, until now, no other choice. Enter a brilliant young entrepreneur - who also happens to be a rocket scientist - who creates a compelling and sexy electric car that goes on to win every award under the sun.

There is so much excitement around the Tesla Model S that it is not uncommon for me to come out of the grocery store in North Carolina and find people in the parking lot taking photos of my car. Earlier this year, Tesla made headlines when the Model S became the first car in history to win Motor Trend Car of the Year by unanimous vote. Then Consumer Reports called it the best car they ever tested and gave it a score of 99/100. In May, Tesla wired nearly $500 million to the government and became the only American car company to fully pay back their government loan. Oh, and by the way, they did it nine years early, with interest - $25 million in interest, in fact, back to the taxpayers. Ouch, I bet that goes down like a jagged little pill in the boardrooms of certain other car manufacturers.

Tesla is rocking the boat. What started as a ripple has now become a wave and the boat they are rocking is so enormous in its domination, some may have thought it to be unsinkable. They are rocking it in a way that is making people uncomfortable, especially the people who are heavily invested in it.

So now ask yourself these questions: What happens when a start up car company is outselling their competitors without placing a single ad? What happens when the public has so much confidence in a company that the stock is up more than 300% this year, and was up over 400% before the media went nuts with these headlines about the three fires? What happens when two of the most powerful industries in the world - oil and the established car industry - feel threatened for the first time?

In this country, the gigantic, powerful entity we call Big Oil made $51.5 billion in the second quarter of 2013. $51.5 billion in three months. Think about that number and then consider the internal combustion engine based car industry sold over 14 million cars in the USA last year. These two giants have been in bed with each other for a century: "You drill for the oil, and we'll make the cars. Together, we'll make a fortune. Even if the people hate us, they will have to use our products because they will have no other choice."

And now a little start up company named Tesla has come along and threatened all of that. We didn't expect these antiquated allies to go down without a fight. It's on. 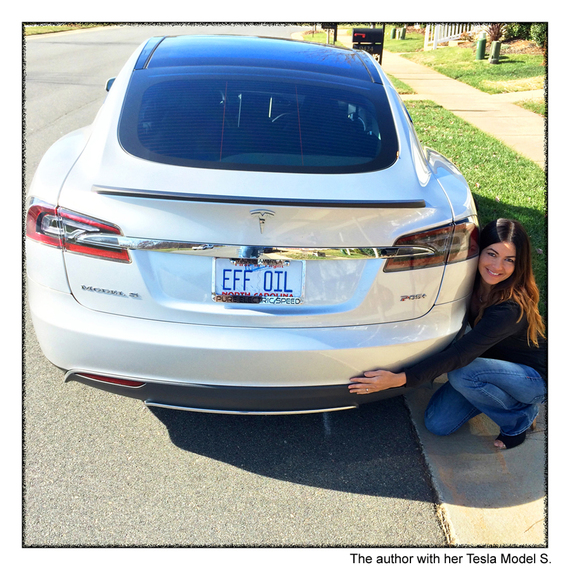 Earlier this year in my home state of North Carolina, the state legislature was trying to pass a bill that would ban Tesla from selling cars in my state. That's right, as ridiculous as it sounds, North Carolina was trying to ban an American car manufacturer from selling cars in America. And they're not the only state that has tried this move: Texas, New York, Minnesota and Virginia all tried to pass similar bills. Do not underestimate the power of the establishment and the money they can throw around to influence politicians, journalists and campaigns.

Who is behind these state efforts to ban Tesla sales? The National Auto Dealers Association. You know, the guys who have been selling us gasoline powered cars since - well, since you were born. Their chairman William Underriner stated to the press that NADA "has a whole mess of lawyers in Washington" to defend their franchise laws and prevent Tesla from selling cars directly to customers. He stated "NADA has serious concerns about Tesla's intentions." I can tell you what Tesla's intentions are: to sell an American built electric car to those who want them, at home and abroad. It's pretty simple, William. NADA partially succeeded in Texas where Tesla is allowed to have galleries but is banned from giving test drives or discussing prices with potential customers.

The fact that the giants of the world are fighting Tesla is a great sign. Consider the famous Gandhi quote "First they ignore you, then they laugh at you, then they fight you, then you win." First they ignored Tesla, doubting that any startup American car company could challenge the big three. Then they laughed and said there was no market for a luxury electric car. Now they are fighting because Tesla is really starting to scare them now. And they should be scared because you know what comes next: Tesla wins.

And win they will. Because they have a superior product. Because once you drive a Tesla, all other cars seem like antiques. Because their leader is a man who not only builds rocket ships, but also seems the most likely person to lead the team that will make the human race an interplanetary species. In other words, he's a very, very smart guy. Most importantly, they will win because the move to electric cars and sustainable transportation is an essential part of the evolution of humans to live in a way that doesn't destroy the world around us.

Grab the popcorn because this will be an epic battle - this is good vs. evil: new, clean renewable energy vs. old, dirty fossil fuels. This fight will be played out in the public for years to come. But follow the money and ask the important questions. When you see three Tesla fires with no injuries getting more headlines than 250,000 gasoline car fires, ask yourself why. Read between the lines, get the whole story. It's going to be a fight of epic proportions, but my bet is on Tesla Motors and Elon Musk. Who doesn't love a story where the good guy wins.