Yo I need to speak on something that's been bothering me for a minute... and I'm sure it's bothering many of y'all reading this: What the hell is wrong with today's eggnog??

I know I ain't the only one who's been noticing the downhill decline. I've gone brought like three or four different brands and they all taste like crap. I got all these undranked eggnog cartons in my refrigerator. Nice packaging, bad taste...

The eggnog game is crap right now. I don't know what's been going on. Lot of competing forces in play. 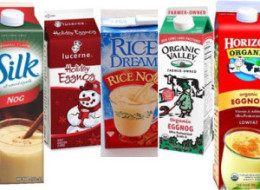 On one hand you got all the Organic Gangstas and Hotep Brothers who never even drank eggnog pushing their agenda, telling you why eggnog gotta be fat free, sugar free and to get real health benefits you gotta add beet juice to it.

Some are saying, "Drink soy milk with your eggnog and add some vegan eggs." Are you freaking kidding me? WTF?? Look, I believe in good health and all... but eggnog is eggnog. It's like going to a BBQ with no BBQ sauce.

The other problem is we got these companies who took over the mom and pop eggnog joints who are GMOing our eggnog to death. So now all the stuff tastes like chemicals, complete with fake cinnamon. Just the other day I brought this new 'creamy brown sugar eggnog' at Target in the nice fancy bottle. I paid five bucks and that shyt taste like triglyceride. I don't want FrankenNog. I want eggnog. I want the eggnog the Three Wisemen was drinking back in the days when they went to the manger. I want the eggnog Mary and Joseph was drinking...

Sad part to all this is all the OGs in the community have been keeping the eggnog recipes on lock, talking about we ain't ready. People be like, Come visit your great aunt Ella for eight hours and then you get a glass of eggnog but no recipe... or gotta go see Uncle Leroy and play Bid Whisk or dominoes all night and then he'll give you a cup with some secret ingredients talking about you ain't ready for the real nog, youngsta. That ain't right.

I pride myself on being a good cook, but I ain't got the eggnog game down yet. I don't know how to whip egg whites and all that craziness... and I know the OGs got some tricks to share. Time to give up the eggnog recipes or I'mma start jacking folks' mixing bowls for real. It's rough out here in these eggnog-filled streets!

This was first posted on Davey's Facebook page: www.facebook.com/mrdaveyd