I've been sitting here for the last 36 hours or so glued to social media. I've been watching my Facebook feed, my Twitter is on fire, all with up-to-the-minute reports of the shooting in Orlando. People are hurting, angry, defiant and some, I've noticed, are in a state of disbelief. People are totally shocked that their Facebook feed isn't overflowing with love and support for the LGBTQ community in the wake of this tragedy.

People are expressing true disbelief, disappointment and disillusionment over how their friends and families are failing to even make mention of the lives lost. Although it's disappointing, I'm less surprised.

Consider this, when you regularly post things pertaining to the LGBTQ community, how many people that are NOT part of said community engage with that post? How many people seek a way to create a dialog?

I understand where it's coming from. People are hurting. They need to make sense of things and they are looking for their entire community to support them as they come to terms with it. For the most part, I've the challenges come in one of two ways.

One of the challenges that people are facing is that somehow they thought that now that our community has suffered the same kind of tragedy as other communities, people would somehow rally around our humanity. Somehow they would stop seeing us as separate. Somehow our community would become part of a larger consciousness. We could finally all come together as a community against gun violence. We could finally come together and be seen as the "United States of Humanity." Then it happened.

People didn't say anything. Or worse, reports starting coming in of the heinous, hate-filled things people were saying. How can this be?

The other challenge that I see people facing is the idea that this happened during Pride. The one time of year where LGBTQIA people allow themselves to feel safe enough to truly express their authentic selves in public. How could someone try to take that away from us after we have fought so hard to be here? What do we do now?

Here's what I have to say: if you find yourself identifying with the first challenge, welcome back to the understanding that people are still working under the premise that we are a marginalized community. Because it happened at Pride, people were able to ignore it because they couldn't see themselves there. They are not gay and if they don't have any out gay friends, then it can stay something that happened to "those people." Or the ones that do have out queer friends are not privy to the things that we do when we get together for Pride. They've never been.

They can, however, identify with just being some tourist walking a Paris street when a bomb goes off. They can imagine themselves just sitting in a movie theater when some gunmen sprays bullets in the audience. They can imagine what it feels like to be a parent sending their child to school with the assurance that they will arrive back home safely and then they don't. If they can imagine how it could have happened to them, then they can see how they are connected.

Now, the second challenge is really one of breaking your rainbow bubble. Let me tell you this, hate doesn't stop because it's your special day/weekend. People don't give you a pass, because they know it's Pride. I'm sorry that for some reason you thought things like this couldn't happen to our community. Our celebration does not prevent tragedy. Hate never rests, so neither can we.

This is what I think we can do about it. Spread love and be out. The only way terrorism works is for us to be terrified, remember? Instead of accusing people of not seeing your humanity, invite them to stand with you in celebration. Invite them to experience Pride with you. Have you ever done that? How can they see themselves having been there without ever having been there? This year be firm in your authentic self. Be as queer as you want to be. Invite all of your humans to join you.

At my old church, we used to have an annual fall event called, "Bring a Pie and a Friend." It was intended to create fellowship among the congregation after many had been away for the summer and the official beginning of our fall church calendar. You were invited to attend and bring at least one person with you, plus a pie of course. Then we would share pie after service and see old friends and make new ones.

I invite you to do the same. Maybe not pie, how about your annual Pride brunch/BBQ/pool party? I know. You don't think that they would "have a good time" because they're not queer right? Sorry I'm calling bullshit. That's you judging them before they get a chance to judge you. Knock it off and at least invite them to come. Let them take pride in being themselves in the midst of all of the gaiety.

The same way people didn't stop flying to Paris and people didn't stop going to movies, or sending their children to school, we must remain just as proud as we were when we went to sleep Saturday night. We must NOT cancel any plans that we had to celebrate Pride. In fact, invite more people. Make our numbers bigger. Let's double the size of every Pride celebration for the rest of the year, holding hands with our friends, family, partners, spouses, children and allies. Let's as my friend Leon said, #BeMoreGay 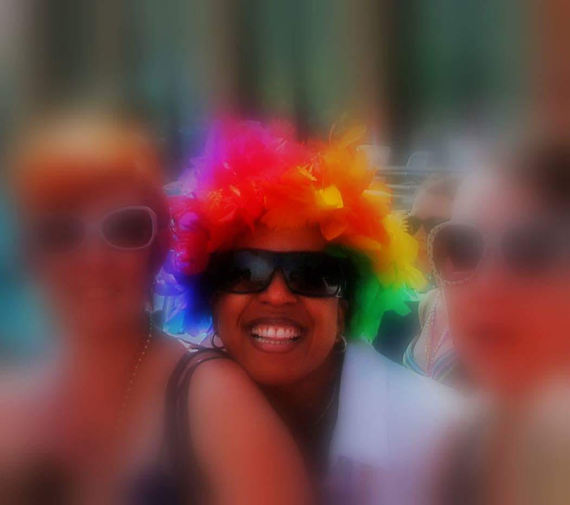