The economic crisis in Greece has created widespread hunger, over 50 percent unemployment for Greek youth and extreme hardship, all in order to finance exponential profits for the banks. (This in a country that was once referred to as The Cradle of Western Civilization.) I do not wish to imply that this is in any way acceptable. I choose to tell this particular story at a time when the world is hearing about only devastating news and the attention-getting politics of the region. Sometimes in times of tragedy, pockets of joy can be found. 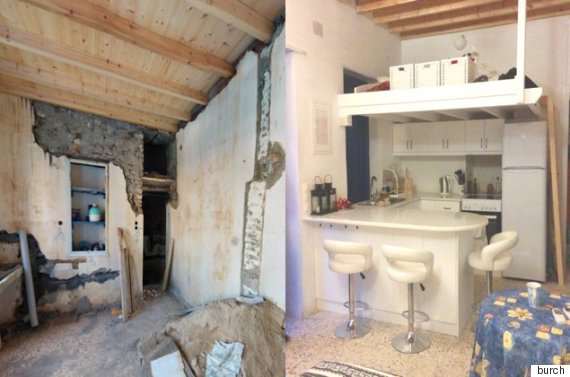 Before and After Picture of Tiny Tinos House

It's August, 2015. I'm sitting on my coco-mat mattress -- made of all natural rubber, coconut husk, and seaweed -- in our tiny house in Tinos, Greece. I'm watching Fifi, the carpenter, give instructions to his 20-year-old son. Fifi, a native islander, is bushy-eyebrowed and gruff. Out of nowhere he asks me to make him coffee.

I pick up the Bunsen burner from the tiled floor, find a box of matches in my purse, and go to the bathroom to fill the stainless steel pot with water. Fifi happily sips the coffee from a glass and lights his cigarette.

I'm so excited about the new white cabinets! We already have a functional bathroom and soon will have a working kitchen in our 300 square-feet stone house overlooking the Mediterranean Sea.

In June my Greek husband, George, and I sold our 1,850 square feet duplex apartment in an intentional co-housing community in Cambridge, Massachusetts, which we had helped build 17 years earlier. The move entailed packing 6,800 pounds of accumulated stuff and putting it into storage in New Hampshire.

The Greek economic bank crisis dominated the news. George had taken $4,000 in one hundred dollar bills from the bank, slipping them into a money belt, in order to pay the workers. The 60 Euro a day ATM limit* was going to make it difficult for us to finish the house.

George, as eager as I was to start a new life, jumped at the idea of moving to his inherited property in the Cycladic Islands. We had been married on this island, and our son had been baptized here. After more than 30 years together, we finally could be impulsive and carefree. We longed for a simpler way of life and hoped to find it in the fishing village of Panormos.

The rhythm was slower than usual during this visit. The tourists were mostly French and were not plentiful enough to crowd the tavernas or monopolize the guest rooms. Food was locally sourced and the prices reduced to pre-Euro costs. The economic crisis was bringing about a reaffirmation of values based on simplicity. Like the locals we met, George and I would learn to enjoy what was free and accessible -- the sea, the sun, the people.

As a writer, I wanted only a room with a view and some uninterrupted time. At age 53, I also craved healthy, good tasting food, clean spring water and the sea to swim in both for pleasure and for exercise. A canvas tarp would give me shade on the porch so I could meditate in the morning and look out each day at the sunrise behind the Planitis Mountain. 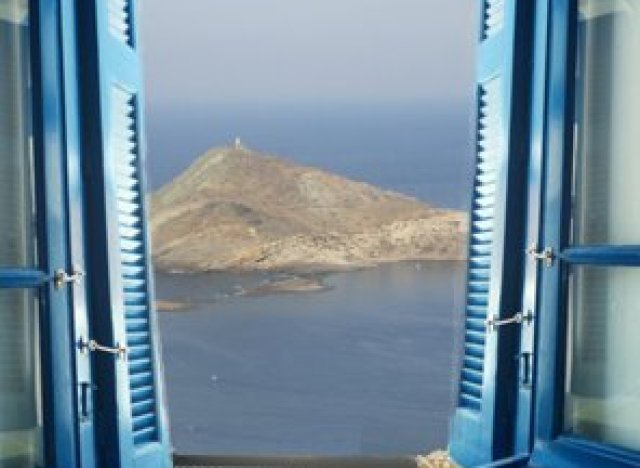 A room with a view in Tinos, Greece

The "after" came about as the result of certain circumstances (our "before" was the Go-Go-Go Western lifestyle.) It turned out that the giving up resulted in a more blissful life. The Tinos locals were teaching me that less is more. That pleasure is free, relationships matter, and location is everything.

*We later learned this didn't apply to foreign bank accounts.

"My Journey Through War and Peace," the first memoir of Melissa Burch's Pathfinder Trilogy, will be published by Mosaic Press on March 1st, 2016. For more information visit www.melissa-burch.com.