On Graduation and the Ceremonies of Our Lives 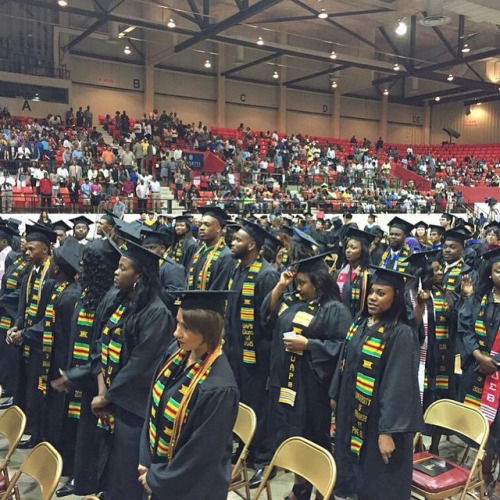 I remember those days of the early sixties speeding along railroad tracks on a train bound from St. Louis through Poplar Bluff and ultimately to Little Rock and points beyond. My father had tipped the train Porter down at Union Station in Columbus, Ohio who was to see to it that I did as instructed and got off at the right stop. Peering through smoke and soot-stained windows I saw relatives I never knew as they stopped from their planting and picking to wave to us as the train passed them by. Where I was headed, they could never imagine; the notion never crossed their minds. I was on my way to college. A brand new world was opening before me. I would never be the same.

It was just a small school, the product of years of neglect and of a state government that saw little need to invest in its growth or to consistently support its academic or intellectual base. It was, as they called it, a "normal" school, one of the "Land Grant" colleges, but it was for most the only opportunity to escape from the pain of ignorance and poverty. These were the years when minds and futures were consistently wasted.

If you asked anyone they would tell you quickly that nothing good could come out of Pine Bluff. This was a school whose faculty was burdened by in-breeding and whose student body was composed of high school graduates in search of a chance to succeed. It was also composed of bright and intellectually hungry students who, given the opportunity, would have done well in any school of the Ivy League.

Dormitories were crammed by an unhealthy excess of residents. The sweltering heat was upon us; there was no central air to shelter us from the torrid temperatures of the Delta. Our library was noted more for the books we did not have than for the volumes that adorned its shelves. The Internet? Google? Forget it. If there were learning resources beyond our over-worn and poorly paid professors, we did not know it and could not access it. Many of our classes were literally taught in frame temporary buildings while remedial reading was a necessary requirement for most.

And yet, we survived. The Institutions we call HBCU's (Historically Black Colleges and Universities) were the lifeline for generations of students who achieved despite the odds.

I cannot tell you how many scientists were born using telescopes that could not focus on galaxies beyond human sight and microscopes that did not work or who learned their lessons from books with "pages torn out."

I cannot tell you how many teachers learned to inspire others with inadequate tools,
or how many psychologists and social workers learned to face their own demons in order to help others face theirs as well, or how many musicians found ways to deal with the cacophony of their own disordered lives and gave the world new notes to sing in churches and opera halls alike.

I cannot tell you how many took those little bachelor degrees and turned them into PhDs; an achievement the world believed impossible.

A few days ago I returned to that Arkansas school, there to be flooded by the memory of the events and persons who shaped my life in so many ways. We have all gone our separate ways now; yet we have found ways to return to the communities from which we had come and to make a meaningful contribution to our world.

For all the advantages our college did not have, we learned to love it and to appreciate the contributions, seen and unseen, that were poured into our lives. We learned our lessons not from text books but from the academics that stood before us and taught us from their hearts, instructed us by their disciplined integrity, and whose ethical and moral impression on our lives will never be forgotten. While others may have described our educational experience as deficient, we saw it as a way out, a way up. Because of a little school conceived in the backwoods of Arkansas, I knew God had smiled on me.

Consequently, there are those for whom I am thankful.

I thank God for "Prexy," the College President who always seemed to find the money to let one more student in and who never gave up on the black boys and girls the world would have thrown away.

I thank God for Shelton McGee who awarded me a scholarship to sing baritone in the Vesper Choir even though I did not know the first musical note.

I thank God for John McLin Ross, "Boss Ross," who gave me an opportunity to explore and exercise my gifts in speech. I thank God for my classmates who taught me that to be able to survive in spite of great obstacles is perhaps the greatest lesson one can learn.

Above all, I thank God for those workers in the fields who waved at me while standing in their cotton rows, waving and beckoning me on toward a future that they would co-sign by the blood, the sweat and suffering they experienced on my behalf that day.

I shall never forget the school that sent for this preacher, the grateful child of his Alma Mater, and who placed on my shoulders an honorary doctoral degree, a degree that should have been placed on more worthy shoulders.

I shall never forget the school that taught us what no school today would think of claiming as its own philosophy of education: "The end of education is to know God, the laws and purposes of his universe and to reconcile ones life to those laws ... We develop power and courage and determination; and we go out to achieve Truth, Wisdom and Justice. If we do not come to this, the cost of schooling is wasted."

It's that time of year again. Its time for graduations and the ceremonies of our lives. It is time for us to graduate from the selfish notion that we have made it on our own or from the notion that we owe whatever success we may have achieved to our own ingenuity and intelligence. Such are the imposters of the things we call success.

So, put on the cap and gown, proudly wear the stripes on your sleeves, let your back be draped with the colorful velvet of your hood. Yet you must never forget that your commencement is but a recognition that you have received what someone else deserved. There is yet a crowd waiting and waving in the fields of glory, dancing on the balconies of heaven, shouting with you for the glory of your day.