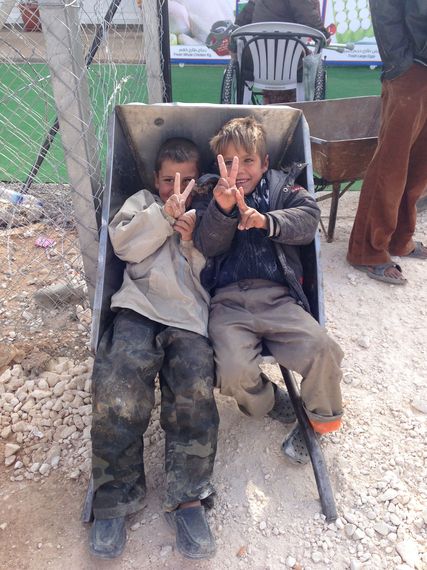 Syrian brothers in a wheelbarrow at Zaatari refugee camp, January 2014 Russia wants Assad, the U.S. has no idea what it wants... but what do Syrians want?

Over the last week we have seen constant posturing, reminiscent of the Cold War days. Except in this instance the U.S. is paralyzed by indecision while Russia flexes its might.

But in all of this political and military maneuvering, has any leader actually taken a moment to think about what Syrians would be willing to live with?

I am absolutely baffled that even after we have seen hundreds of thousands of Syrians flee in the most dangerous conditions to reach safety in Europe, our political leaders aren't actually creating a solution that will actually entice Syrians back to Syria.

Having spoken to dozens of Syrian refugees at Zaatari refugee camp last year, there were three constancies in their actions and motivations.

The first is they all waited until their situation became completely unbearable before they decided to seek refuge outside Syria. It is often the option of last resort -- leaving your home, your family, your community and seeking safety beyond one's borders. And if we look at the trend of Syrian refugees fleeing to Europe now, it's simply because these Syrians know that the international community has deserted them.

Syrians want what we all want as human beings: safety, shelter, food. If the international community has forgotten them, they will take matters into their own hands and that is exactly what we're seeing.

The second constancy is that they were fleeing the repercussions of Assad's barbarity. There is no denying this. They were in Jordan, in Lebanon and in Turkey before ISIS even came on they scene.

The well-respected Syrian Network of Human Rights says that in August 2015, 1623 Syrians were killed by regime forces versus 236 by ISIS. On those figures, the Syrian regime is responsible for more than 87 percent of deaths in Syria.

More than 11,000 barrel bombs made of scrap metal and high explosives have been rolled out of regime helicopters onto hospitals, homes and schools since the UN banned them. These aerial attacks are the biggest killer of civilians. They drive extremism. According to NGOs working on documentation, casualties from aerial strikes, ground shelling and explosions count for over 50 percent of total documented deaths in 2014, a substantial part of which are caused by barrel bombs.

Before I move on to the third constancy, let's map out all the hypotheses and analytics of the current situation.

1. If the West reaches an accommodation with Assad will that drive more Syrians to ISIS?

Russia states an intent to fight Isil on the one hand, and to support the Bashar al-Assad regime on the other. Fighting Isil without pursuing a parallel political transition only risks escalating the civil war in Syria - and with it, the very extremism and instability that Moscow claims to be concerned about and aspire to fighting. So that approach is tantamount ... to pouring gasoline on the fire.

2. If the West reaches an accommodation with Assad will rebels lay down their arms?

3. If rebels do not lay down their arms will the barrel bombs and other violence by Assad against civilians cease or even decrease?

4. If the barrel bombs continue will that push more Syrians to leave Syria?

5. If we accept Assad what proportion of the 4 million refugees currently in Lebanon, Jordan and Turkey have any interest in returning to a Syria that will remain racked by civil war?

Well this brings me to my third constancy. None of the refugees I spoke with said they would ever return to Syria while Assad was still there.

So if Europe, the United States and Australia want to see any end to the refugee crisis, not only do they have to address the civil war; they have to address Assad. Chose your side: those that are obsessed with one person as President (Russia and Iran) or the other side which says: "let's agree on one person out of a possible 10 million Syrians, and our only objection is one person: Assad".

Let's stare Putin down on this.

In this whole debate, when have we heard from they Syrian refugees about what political solution they will back? Why hasn't the UN Syrian Envoy De Mistura spent any significant time in the refugee camps to hear directly from this constituency?

The refugees living beyond Syria's borders will not return if they do not feel safe. Until these people have their voices heard, until the international community starts factoring in their concerns, their solutions, their hopes, we will continue to see the Syrian civil war play out into a Cold War maelstrom and a worsening refugee crisis.

Finally, how will our future generations judge us if we continue to watch this slaughter? Don't forget about Alan Kurdi's image that is seared into your memory. Galvanise that anguish into a real demand to save lives: stopping the barrel bombs.

Here is my plea as a Syrian-Australian: A No Fly Zone would save lives more than any other act. Stare Russia down.