I've laid out a Dual-Framework for Leadership and Business as Usual, which graphically can be summarized as follows: 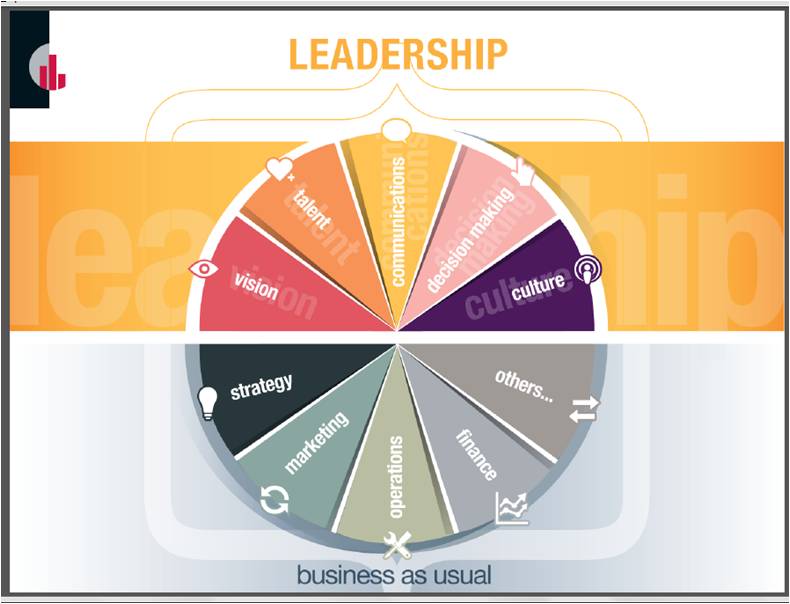 If we assume that "culture" is the synthesis of all the leadership variables, as strategy is for business as usual, what is more important, culture or strategy?

Peter Drucker says "culture eats strategy over breakfast," and so do successful CEOs.

What could be so important that made "the most successful and admired CEO in history" fail? Culture maybe? If Culture is so important, why isn't it included in Porter's strategy model? I believe both Strategy and Culture are important but Culture is ultimately more important than the former. Culture is an additional source of Competitive Advantage. Paradoxically, we don't have a set of "variables" in strategic analysis or in Porter's 5 Forces Model that take this into account.

And what about Jack Welch's GE? Their strategy was to be "Number one or number two in any business they operated." According to Michael Porter, that isn't even a strategy! Nevertheless, it is unquestionable that Welch built an amazingly successful organization. It is clear that every one of the hundreds of GE's businesses had its own strategy, and that the group as such didn't have one. But if you are the industry leader or challenger you will almost always be a company with a successful strategy! It's like saying "I will only keep companies that have successful strategies, whatever they are".

I agree with Michael Porter in that "being number one or number two is not a strategy"; but what he doesn't add is that it is actually the basis for a culture. And culture is very powerful. The culture of winning! Who doesn't like to win? Determination to win instills the spirit of success that everyone enjoys. In the culture of winning you have a focus on talent and growth, and the value of differentiation -- the rule of 20/70/10. Additionally, GE's culture had the value of candor, and globalization -- Jack was the first one to see the tremendous power of this trend. GE had a few strong values, all consistent with the Culture of Winning and with Jack's own personality and beliefs. So what was the reason behind GE's success? A Strategic Competitive Advantage in each one of the hundreds of business? The real differentiator was its common culture of winning.

Let's take a look at Southwest Airlines, one of the most successful companies in the last 40 years. Actually, it was the most profitable company of the Fortune 500 list between 1971 and 2001. What was the true source of their success and profitability? Was it their strategy? Maybe so. Herb Kelleher -- its CEO for 35 years -- assures it was a 10-word strategy that, unlike most of the companies, everyone in Southwest knew by heart: to provide "Short haul, high-frequency, point-to-point low-fare service." As Michael Porter has pointed out in many of his presentations, their strategy, together with many other dimensions of their business model were at the root of their success. But was this the reason for 40 years of unparalleled performance?

I don't think their strategy or their business model was the true source of competitive advantage. I believe it was their culture. In Herb Kelleher's own words: "Given enough time and money, your competitors can duplicate almost everything you've got working for you. They can hire away some of your best people. They can reverse-engineer your processes. The only thing they can't duplicate is your culture."

As an example of this, Herb once told that they used to have "Industry Days" to share with people from other companies of their industry, including competitors, how they did things. But, paradoxically, although they gave away their secrets, no competitor could really copy them. "They can imitate what we do, but not who we are or what we believe; and without that, doing is not enough. Do you know what is the difference between strategy and culture?" Herb continued "Well, when Napoleon was in Paris in a room with all his Generals, around a table, discussing on how to attack Russia, that is strategy. But what makes 1,000,000 men march to Moscow, that is culture!" Culture is the engine, the propeller. What made 1,000,000 men march to Moscow? A sense of pride? Of success? Of duty? All these are emotions... not reasons. Emotions are a deep component of culture by the way, the etymology of emotions comes from "motion," what makes you move!

In addition to Jack's GE and Herb's Southwest Airlines there are many other interesting examples. I'll go even further: Take any highly successful company and you will find a very strong culture! Take Tony Hsieh's Zappos.com, for example: "At Zappos.com, from the beginning culture has always been the most important and to this day is the number one priority in the company. And our whole belief is that if we get the culture right then most of the other stuff like delivering great service or building a long-term enduring brand will happen naturally after it. It obviously depends on what the culture is." "Inherent in the 10 Core Values there needs to be some related to business".

Strategy and culture are the two pillars for business success and for far too long we only paid serious attention to strategy. Now is the time to manage your culture!