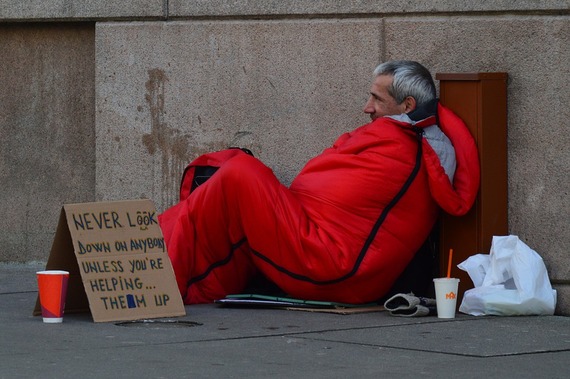 The people didn't ask for Donald Trump, they asked for change and settled for Trump. It was the change Obama had promised eight years ago. While Trump fired up some pre-existing xenophobic elements of the Republican base, what delivered him the victory that eluded his Republican predecessors was an appeal to the "forgotten men and women" i.e the working class. Venting at the 'establishment' - was a way to articulate the deep anger driven by ever increasing economic inequality and political powerlessness. While division is the story touted across the punditry, Trump's election also exposes something with greater transformative potential: a political realignment reflecting a re-emerging class consciousness. Suspicion of minorities has long found a home in Right Wing Republican politics; Trump merely took it to its logical conclusion. More uniquely though, he coupled it with the relatively Left Wing traditions of protectionism, public infrastructure spending and non-interventionist, non-anti-Russia foreign policy. Trump also did something Democrats have too-often shied away from - he actually used the term 'working class'. Further underlining the return of economic class consciousness is that fact that right up to the election, unabashed socialist Bernie Sanders outpolled Trump. This enormous blow to establishment neo-liberalism underlines the imperative for the Left to return to its roots of angrily fighting for working people and elevating economic equality as its flagship cause.

This article, the first in a series discussing this most important of trends sweeping the US, UK, Australia and the Western world, will focus on economic inequality. The second piece will focus on the 'rigged system' and powerlessness, discussing the lack of influence ordinary citizens have on policymaking. The third will argue that only a Left Wing movement that fearlessly advocates economic change can match Trump and the populist Right.

Inequality is the biggest scandal of our time and the masses have woken up to it. Despite the cartoonish level of irony implicit in the born-rich billionaire posturing as a hero of the working class, Trump tapped into real anger. This anger and his support grew as the mainstream media handed him bonafide outsider status through its attacks on his personality, however justified. Trump placed his arm over the shoulders of people hurting from economic injustice and whispered to them that they should blame minority scapegoats and some elements of the establishment (though not others) - punching both down and up. Economic inequality provides the most fertile ground for a demagogue to ripen hatreds (alongside other factors like a pro-military intervention media).

While anti-immigrant sentiment and Islamophobia were significant factors in his victory, they were far from being the only drivers. The statistics of key states show that many who voted for Obama in 2008 and 2012, less likely to be racists, also voted for Trump. These people helped swing the election. The greatest new division in this election wasn't the race gap; racial minorities had long voted Democrat over Republican. Trump won a higher proportion of the Latino vote than Mitt Romney. African American support for Clinton was down from Obama's numbers. The biggest new division wasn't even the gender gap. Non-college educated white women voted for Trump over Clinton, 62% to 34%, more than the majority Hillary had with women overall. The biggest new divide was the class gap. Trump excelled in Northern blue collar regions, winning non-college educated whites by 39 points.

This bucked the trend which has existed since the days of Nixon's 'Southern Strategy', where Republicans use the anti-Civil Rights backlash to ensure that social issues were the only acceptable ground upon which political battles could be fought. This evolved over time to issues like religion and abortion being harnessed to fire up the base and snatch up working class voters whose economic interests would be better served by the Democrats. The only debate over economics permitted was the 'big government' versus 'small government' pantomime. The US Democrats and UK Labour Party endlessly conceded ground to the Right to the point where ideological choices like trickle-down theory, privatisation, deregulation and ever-increasing tax cuts were accepted as irrefutable truths. Hand in hand with 50 years of the Left's economic retreat came rising inequality and the gutting of the middle class, to the point where the top 10%'s share of national income became the highest since the Great Depression, ultimately surpassing that of the bottom 90%'s. 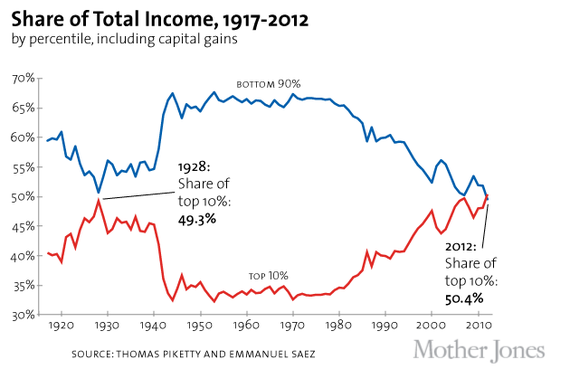 When the Global Financial Crisis finally cracked the veneer of the infallible free market, a groundswell for change led to people putting their hope in a relative outsider. But despite a progressive background, inspirational speeches of hope, and superficial characteristics suggesting the potential for change, Obama turned out to be a steadfast moderate and pragmatist. 95% of income gains from 2009 to 2012 went to the top 1% of the earning population. In 2015, America's top 500 CEOs each earned, on average, 335 times the average worker's wage.

Now, economics is back with a vengeance. The two candidates who inspired the most passion throughout the whole process were economic populists Trump and Bernie Sanders. During the primaries, family values crusaders like Ted Cruz abjectly failed to ignite passions. Hillary's critiques of Bernie's slightly worse record on gun control gained little traction in comparison to Sanders' attacks on her proximity to Wall Street.

What the mainstream media failed to realise was that peoples' lives have become so abysmal that they care little whether Trump, as a person, makes deplorable comments, or even does deplorable things. Anyone who has experienced the stripping of dignity that poverty brings, or the survival instinct that kicks in with the lingering threat of poverty, knows that change, any change and rage become the superseding drivers. A woman working two insecure jobs and overwhelmed by debt knows the gender of the next president or heart-patting speeches by Beyonce won't stop her still being poor tomorrow. Worrying about a candidate's personal morality was a luxury to many. What mattered was their perception, however erroneous, that Trump would stand up for them with policies that affect their lives.

The role of economics and class were perhaps clearest in Trump's redrawing of the electoral map. He surged in the de-industrialised Rust Belt, including Michigan and Pennsylvania, as well as Wisconsin which no Republican has won since 1984. These places epitomised the stagnation of incomes and living standards that have ravaged workers' lives since the Right began to successfully tear down the welfare state and public spending.

People have finally cottoned on to the injustice of the system. Levels of inequality are so astronomical that even though the public is only aware of a fraction of it, even this fraction is enough to inspire indignation. The table below reveals the richest 20% own over 80% of the wealth, while most people think the richest own less than 60% and would like the richest to own around 30%.

This election points to a convergence at the economic bottom that provides opportunities for both ends of the political spectrum, not only the extreme Right, but also the real Left. In the UK, inequality was the underlying factor that led not only to Brexit, but the much less appreciated rise of Opposition Leader Jeremy Corbyn. This is a man who, despite almost complete hostility from the establishment media, has managed to use his message of genuine economic change to re-energize and grow the Labour Party in a way not seen in half a century.

While immigration and globalisation may feel like salt rubbed into a wound, the economic system and its rampant inequality are what created the wound in the first place. A class consciousness is being revived that has not been seen in decades. This is a gathering at the peripheries of which Trump can only capture the white half. The working class is awakening, but this time only its white members were offered a champion for their cause. There are signs Trump may even squander this, already having begun his rapprochement with the establishment, hiring ex-bankers and suggesting he'll cut the corporate tax rate from 35 to 15%. The stage is definitely set for a more fundamental upheaval. To correct the massive inequalities which divide the country, however, the Left needs to embrace its economic populist past and reposition itself as a true champion of working people.