Military coup or not, there were tens of millions of Egyptians out on the streets who demanded, and then ultimately celebrated, the ousting of (now former) President Mohammad Morsi.

Whilst the pivotal role of Egypt's military establishment can't possibly be disputed (particularly that the army has made its position very clear), describing what happened exclusively as a coup d'etat is both unfair to the Egyptian people and incredibly biased in favor of the ousted president. 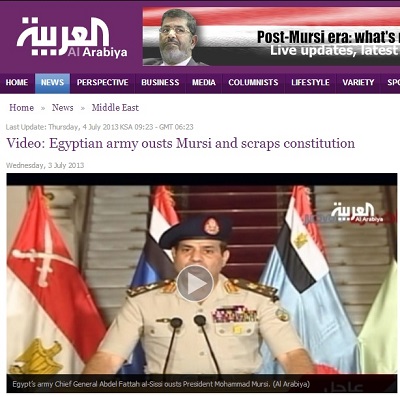 After all, you can't possibly be doing a good job as a democratically elected leader if you manage to upset a staggering 33 million people in less than one year in power!

Let's not forget that one of the main reasons that Egypt rebelled against the Mubarak regime in 2011 was the fact that they could no longer sustain their economic woes; particularly that it seemed that as the people got poorer, those affiliated with the regime were getting richer.

Instead of appointing his bearded friends in highly sophisticated positions, Morsi could have appointed technocrats to help salvage the economy, revive industries and empower entrepreneurs.

Had Morsi paid less attention to excluding others and listened to those who were genuinely trying to help, he would have realized that his country's growth is at the weakest it has been for two decades, that unemployment still stands at a record 13.2 percent and that his inability stabilize the situation has caused harm to the vital tourism industry, scared-off foreign investment and prevented the much-needed International Monetary Fund (IMF) aid package from arriving.

In his last speech as president, Morsi kept going on about his 'legitimacy' and was foolish enough to think that the people who voted him into power are going to keep him there when two of every five Egyptians continue to live on less than $2 a day.

A recent United Nations report shows that poverty and food insecurity had jumped in Egypt over the past three years. It estimated 17 per cent of the population struggle to secure enough food, while the malnutrition rate has risen to 31 per cent of children under five.

Surely, not all of these economic issues can be blamed on Morsi alone -- however, the unfortunate reality is that people will always want someone or something to blame when they can't provide for their families or put food on the table.

I am not sure that they include modern-day political campaigning in Muslim Brotherhood literature, but if they ever consider an update following these recent events, perhaps they would find the best replacement of their infamous slogan of "Islam is the solution" in Bill Clinton's successful 1992 presidential campaign.