15 year old Helena Rapp woke up to another sunny day in her hometown of the city of Bat-Yam on the Mediterranean shore. The time was 7:30am when she was making her way to the bus stop by her home, traveling to school, as she did every morning. Only that morning, she did not make it to school. 18-year-old Palestinian terrorist, Fouad Abd El Hani, got to her first and stabbed her to death with a knife. This murder took place on May 24, 1992. The attack shocked the Israeli public, and was a prominent one, in a series of such attacks at the time.

And here we are again, 23 years later.

In recent weeks Palestinian terrorists - many of whom below the age of 25 - have taken to the streets of Israel to commit a series of attacks against innocent civilians, using knives, cars, axes and other means of extreme cruelty. These attacks have claimed the lives of 9 Israelis so far and injured almost 100. One such incident included two young Palestinians, aged 13(!) and 15(!), who stabbed a 13 year-old Jewish boy 15(!!) times, as he made his way out of a local grocery store, riding his bicycle home.

Are we doomed to live our lives between one cycle of violence to the next?!

On the political front, Israelis are hearing the same old tune coming from some members of the international community and the media, blaming Israeli "settlement activity" for this unacceptable violence (as if there ever is any justification to murder another human being just because you happen to disagree with them). It's time to say with a clear voice: enough is enough. Too long has the specter of "settlements" ruled the dome, thus preventing - yes, preventing - any serious discussion on matters that actually matter!

Looking at Israel's history over the last few decades, its clear that settlements are far from being the real bone of contention between Israelis and Palestinians. Whenever Israeli leadership saw a chance for peace, Israel seized it and tried to make the most out of it, even if it meant evacuating territory. This is what happened when Israel's late Prime Minister, Menachem Begin, signed a peace treaty with Egypt in 1979, which included an Israeli agreement for a full withdrawal from the Sinai Peninsula and the evacuation of over 7,000 Israelis living there at the time. In 2005, Israel - on its own initiative - decided to unilaterally withdraw from Gaza and from several settlements in the northern West Bank, removing thousands of Israelis out of their homes in the hope Palestinians will seize the day and prove to us, and to the rest of the world, they know the true meaning of sovereignty and will be able to use this as an engine of growth. This, unfortunately, did not happen. It was actually the exact opposite. Instead of using this opportunity to launch peace, Gaza has become a launch pad for missiles and tunnels, targeting innocent civilians. The lesson to Israelis was clear: Palestinians are not ready. Not just yet.

The international fixation on settlements has seriously damaged the prospects of real peace between Israel and the Palestinians, first and foremost because it allowed the world to overlook the core issues of education and incitement. We have lost over 20 years since the signing of the Oslo Accords, literally several generations, ignoring the horrible incitement and hatred taught to many Palestinian children over those years. The methods are diverse: poems, TV shows, extensive social media brainwash, theatre plays and even children TV shows and cartoons, all used to foster more and more generations of hatred, which brings us exactly to where we are today: young Palestinians who were brought up not to view Jews as human beings, and hence find themselves able - without any moral dilemma or conscience - to axe a 60 year old Jew to death at a bus stop, simply because he was Jewish.

It is time to re-shift the focus, but I realize this is not an easy task. It is much easier for a politician to speak of "settlements", a "consensus issue" whose solution could come about in the course of a term or two, thus allowing the leaders to reap the benefits of "peace" while still in office. But the harsh truth is that this is a mirage. A delusion. A distraction. Education, on the other hand, might take much more effort to deal with and, yes, it might even take more than a politician's term to solve, but it is the heart and soul of the problem and avoiding dealing with it is tantamount to treating cancer by taking Tylenol. If we truly want to put an end to violence, not only during this round, but to make sure there are no more rounds, its time we get serious and put our efforts and attention where difference can really be made. Long term.

Lets put an end to incitement. We can do it!

There is really no more time to waste. 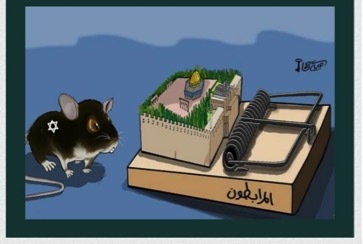