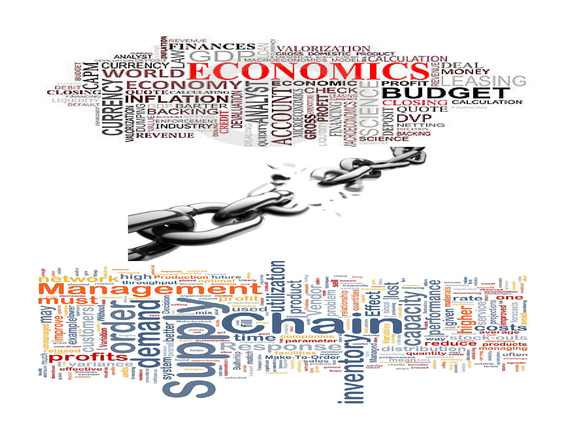 Nobody will deny that THE current issue is the economy. But, economic leaders and politicians, take heed, it's not the economy, stupid; it's the supply chain process. Imagine that no public bridges were built at all in the Industrial Age. Not even a single one in the whole world - no Golden Gate Bridge in the United States; no Tower Bridge in England; no Sydney Harbour Bridge in Australia. What would have happened?

In this case, could we have achieved prosperity by adopting more aggressive expansionary economic policies and stimulus plans? No, it might have been almost impossible and wasting a lot of time and effort. Or, should we have constructed such public bridges? Yes, absolutely. Then, was it the economy? Or, was it the public bridge?

As you may know, we have developed many advanced supply chains by using information technology in almost all industries over the last 30 to 40 years of the Modern Information Age - nothing looks wrong here, but actually, I have found something seriously wrong.

Unfortunately and unbelievably, even if some of these functions are public in the network, almost all IT-based supply chain networks ever developed are private, walled-off, and held in silos; mostly owned by big companies and used only for their own benefit. No collaborative or publicly available information-based platform (or infrastructure) for the whole supply chain process has been developed, ever. Strangely enough, not even a single one in the whole world. (EBay is a public platform for only communication as a function in the process, but not for the whole supply chain process.) If it is assumed that there is a supply chain river to cross between suppliers and customers, this situation is just as if there were no public bridges at all in the real world.

If it is true, what will happen in our economy? Inviting catastrophe!

Can we still solve our current economic crisis only with the existing economic policies and plans? No, the efforts will not be effective!

Actually, most of these privately owned IT-based supply chain networks that have been developed have been net job-killers and have created numerous abnormalities, principally micro-bubbles and local deflation in the market as a whole. In this situation, no matter how powerful the expansionary economic policies or fiscal stimulus plans are adopted, they will not improve the situation but may, in fact, worsen them, mainly because we cannot sustainably create enough jobs to revitalize the economy, systematically.

Then, what should we do?

Albert Einstein said, "If you can't explain it simply, you don't understand it well enough." Isn't it clear that "It's the supply chain process, and not the economy"? More specifically, isn't it the lack of collaboration or appropriate public infrastructure for the whole supply chain process in the Modern Information Age?

Then, the answer is simple and clear: We should develop such public platform (infrastructure or bridge) as soon as possible and implement it in the market, quickly and effectively.

The conditions and circumstances for the development of this new publicly available information-based platform (infrastructure or bridge) for the whole supply chain process are already in place. That is, information technologies, facilities, devices, and people are already in place to develop it. The only issue that remains is the will to develop it. Moreover, the solution is already in sight. It only needs to be implemented. Once decision-makers are willing to make the necessary choices, it will be relatively easy to implement, and it will not take long to see positive results.

If it is developed and implemented in the market, I believe numerous new businesses and jobs could easily be created in almost all sectors of the market; by providing a fair condition for competition to all, by removing the hurdles to new business creation, and moreover, by facilitating the sharing or collaborative economy. Thereafter, many of the problems of the current economic crisis will be easily solved.

I would strongly recommend that governments and leaders of the Western countries, especially the United States and the Euro-zone countries, initiate the development of this new job- creating solution, and provide the active assistance and support necessary to revitalize their own economies and also the world economy, and that we do so immediately.

Time is running out. The old private supply chain networks continue to shed jobs and wreck businesses. This new collaborative IT-based platform (infrastructure or bridge) for the whole supply chain process can and will reverse these effects in time to avert collapse.

It's not the economy. It's the supply chain process, stupid!