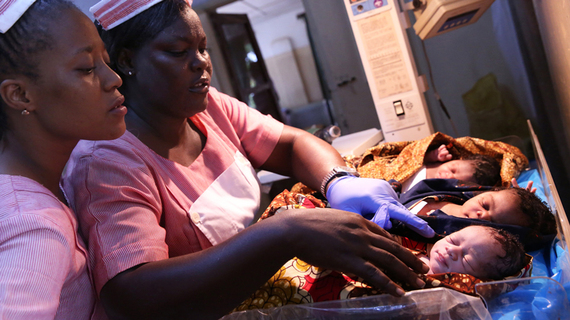 Yet for billions of others -- and especially for those in the developing world -- even basic health care remains out of reach. Estimates suggest that only 65 percent of the global population had access to basic health services in 2013.

At the G8 Summit in 2008, the government proposed a comprehensive approach to health system strengthening. Japan's advocacy is a major reason that UHC is a target of the Sustainable Development Goals. And this week's conference in Tokyo on UHC in the new development era shows that the support and commitment for the movement has never been greater.

This political support has taken time to develop. Over 35 years ago, in Alma Ata, Kazakhstan, world health leaders committed to provide health for all by the year 2000, emphasizing the needs of the poorest countries. But after Alma Ata, many organizations, including the World Bank, considered this comprehensive approach too expensive and unfocused.

Since that time, epidemics from HIV/AIDS, tuberculosis and the flu have killed millions of people and caused tens of billions of dollars in economic losses in many of the world's poorest countries. Over the last two years, Ebola has killed more than 11,000 people and caused billions of dollars in economic losses in Guinea, Liberia and Sierra Leone, largely because of the failure to build resilient and sustainable health systems in those countries.

We cannot afford to put off action any longer. Experts predict that within the next 30 years, we are likely to face a pandemic like the 1918 Spanish Flu, which could kill as many as 30 million people in 250 days -- and reduce global GDP by nearly five percent, or close to $4 trillion.

The good news is that the world is rallying to Japan's priorities of building resilient and sustainable health systems and enhancing the global health architecture to respond to public health emergencies. The World Bank Group is working with other organizations to do its part.

One of our newest initiatives is the Global Financing Facility for Every Woman Every Child. This country-driven partnership will accelerate efforts to end preventable maternal and child deaths by 2030. It catalyzes poor countries to increase investments in frontline health services and preparedness by increasing the amount of grants and low-cost financing available for the health needs that countries identify once they achieve performance targets.

The Global Financing Facility also links to IDA, the World Bank Group's fund for the poorest, helping to make even more funding available for health system strengthening. IDA is already our largest source of support for health in developing countries. Generous contributions to IDA from Japan and other countries have been critical to bringing quality, basic health services to the world's poorest and most vulnerable people.

At the request of the G7 and G20, the World Bank Group is working with the World Health Organization and other partners to build a comprehensive response to pandemics. A critical part of the framework that we are developing is called the Pandemic Emergency Financing Facility. The facility aims to eliminate financial constraints to a swift and effective response to an outbreak, using pre-arranged public and private financing, including leveraging resources from insurance and capital markets. It should save lives and protect economies.

A strong and well-funded WHO must be our next step. The reforms underway to strengthen the WHO's emergency response capacity are a good start. We must fully fund its Contingency Fund for Emergencies.

We also need a new international mechanism designed to hold accountable the pandemic risk management community. This body must be apolitical, technical and independent of countries, institutions or funders. It should have the mandate, funding and authority to evaluate the preparedness and response plans of governments, international institutions, the private sector, civil society, and communities. By telling the truth to the highest levels of the global system, this group of trusted experts would prompt action from the entire pandemic response community.

Japan's G7 Presidency in May is our moment for action. At the Isay-Shima summit, we have the opportunity to finally act on the unfulfilled promise of Alma Ata, and move rapidly toward universal health coverage. It also is our opportunity to prepare ourselves before the next pandemic hits. Accomplishing these goals will represent a quantum leap forward in people's health and economic well-being.