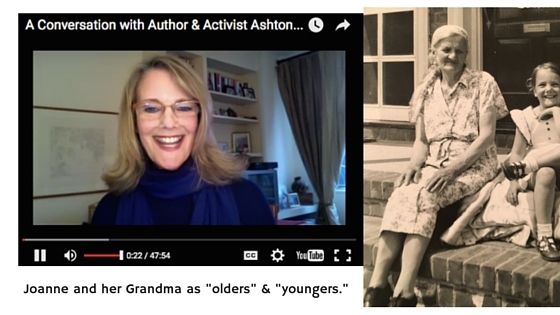 Generally, I've tried pretty hard to avoid discussing my age, saying something glib like "age is just a number and mine is unlisted" whenever the topic comes up.

My recent video chat on WHAT NOW WHAT NEXT with Ashton Applewhite, the author of This Chair Rocks: A Manifesto On Ageism got me thinking seriously about why I'm so discombobulated by the older face staring back at me in the mirror, and why I'm so delighted whenever anyone tells me how 'young I look for my age.'

No matter how hard I work out and how many microdermabrasion facials I get (I've still resisted going under the knife) I'm not going to stay young forever. In my conversation with Ashton, I dragged out a picture of my grandmother, because I was blown away by the difference in how we looked at similar ages. She was an "old lady" and I still think of myself as kind of "young". I wondered what age we become "old ladies" anyway? Ashton took me to task, comparing ageism to racism and sexism, saying that ageism takes root in our own denial, pretending we're not going to get older. Maybe it's time to stop obsessing about the passage and ravages of time and embrace growing older after all.

But there's just something so innately depressing about the words we use to describe people over 50, calling them/us seniors, or elders. (I choke on the word "senior" at the movie box office, whispering it to the cashier). Ashton suggests using the words "olders" or "youngers" instead, and thinking about age as a spectrum, not a binary that pits old vs. young and us vs. them. Aging is living and it starts the minute we're born.

Of course, as women we face a double standard, particularly in our careers. A recent NY Times article pointed out that bosses stop investing in their female employees ten years earlier than they do for men. Amy Schumer's hilariously scathing video with Tina Fey and Patricia Arquette celebrating Julia Louis-Dreyfus "Last F**kable Day," powerfully showcases Hollywood's/society's attitude towards women over 50. Ageism is present any time anyone assumes we're too old for anything, whether it's a role in a movie, a surfboard, a relationship, or a job.

With Hillary Clinton running to be our first woman President at the age of 68, things are poised to change. There's an opportunity for us to turn things around, getting rid of our old-fashioned ideas about women's power and potential diminishing with age. Why should our current older selves be inferior to our younger selves? Why is youth a measure of power? I wouldn't choose the mind or mindset of my 25 or 35 year old self for a minute, so why should I feel compelled to look like her, or be like her? Like most entrepreneurs I didn't even start my first company till I turned 40. As Carl Jung noted, until 40, "we're still doing research" about who we are as humans and what we want.

When we fret and lie about our age we're validating society's message that there's something wrong with being old and we're negating the value of wisdom. Plus people who adopt a positive attitude towards aging tend to live an extra 7.5 years. That's a pretty strong incentive to overcome our outmoded fears and stereotypes

It takes an act of imagination to enlarge our ideas of beauty, value, self worth and possibility. Ashton aims to lead a revolution against age discrimination, making ageism as politically incorrect as sexism or racism. And I'm in! It's time for "age pride" to go mainstream.

Are you ready to fight back against ageism too?

Co-Founder, WHAT NOW WHAT NEXT, www.whatnowwhatnext.com