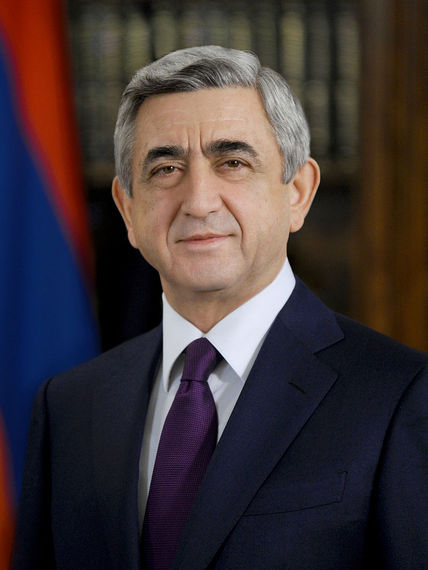 YEREVAN, Armenia -- The bloody siege of a police station in Armenia is over, with President Serzh Sargsyan's administration prevailing against the station's 32 fringe-party occupiers.

But the depth of public anger that surfaced in street demonstrations supporting the occupiers and in anti-government commentaries from political analysts and other thinkers indicates that most Armenians have lost faith in Sargsyan.

It's time for him to go.

A clearly shaken Sargsyan tried to put the best face on the station occupation by addressing an assemblage of Armenian influentials, including government officials, lawmakers, educators, representatives of the arts and culture, and the clergy.

But Armenians saw through the event as a pitiful public relations ploy aimed at defusing grassroots anger.

Underscoring the widespread feeling that Sargsyan's victory over the station occupiers was Pyrrhic was the news that Russian President Vladimir Putin has summoned him to Moscow for talks on August 10.

The last time that happened, in the fall of 2013, Putin ordered Sargsyan to drop Armenia's plan to join the European Union -- or else -- and join the Moscow-led Eurasian Economic Union instead.

That turn-about led to anti-government demonstrations from many of the Armenians who thought their country would be better off casting its fate with Europe instead of its old subjugator Russia.

So the meeting on August 10 with Putin must be filling Sargsyan with dread.

My guess is that Putin, who despises the color revolutions that sparked regime changes in Ukraine, Georgia and Kyrgyzstan, will tell Sargysan that while he supports him remaining in office, Sargsyan needs to be ruthless in putting down the next challenge to his authority.

Sargsyan's speech to the Armenian influentials on August 1 vacillated between conciliatory and threatening.

His most grandiose conciliatory pronouncement was a declaration that in the months to come he would be forming a national-unity government that would include representatives of all political persuasions.

The implication was that Armenians who had once felt voiceless would now be represented in the decision-making process.

The goal, Sargsyan said, is to build on the reforms that Armenia's new constitution has provided for.

"One thing is clear," he said. The change that's under way "in Armenia's social and political life must be expedited."

He might have been better off not mentioning the new constitution. The document ignited nationwide protests in December of 2015 because of provisions that allow Sargsyan to stay in power for many years to come.

Another attempt at conciliation in Sargsyan's speech was his vow that Armenia would never agree to the loss of any land in the Nagorno-Karabakh enclave. A long-simmering conflict between ethnic-Armenian separatists and Azerbaijan flared up again in April of this year, with Azeri forces occupying some of the enclave's land.

Still another attempt at conciliation in Sargsyan's speech was his assertion that there would be an investigation of the station occupation, presumably both the underlying causes and how authorities had responded to it.

Sargsyan didn't address the issue of force against the protesters. But he did apologize to the journalists who were injured after Reporters Without Borders condemned the violence. And Sargsyan said it wouldn't happen again. Many journalists probably rolled their eyes over that.

As for the threatening side of his speech, Sargsyan said the government would never again allow a violent protest to destabilize Armenian society.

The implication was clear: If there is another attempt, it will be snuffed out immediately, with overwhelming force and likely without regard for life.

As might be expected, the threats were not well received.

Political analyst Hrant Gadarigian spoke for many in noting that after eight years of protests against Sargsyan's rule, the president still doesn't get it.

"Maybe Sargsyan just doesn't care what people think of him," Gadarigian wrote. "It could also be that he and his cronies live in a world so far removed from the trials and tribulations of the common folk that they really can't see beyond their villas and the walls of the presidential palace."

He was referring to Armenia being one of the former Soviet Union's poorest countries, to millions leaving to find work elsewhere, and to the corruption that has allowed Sargsyan and other political and business elites to live sumptuously.

Given the lack of progress in the eight years that Sargsyan has ruled, and the country's continuing turmoil, many Armenians have concluded that he must go. I am one of them.

The skeptics believe a new leadership team must be brought in through free and fair elections -- people with the credentials and the resolve to fix the problems that Sargsyan has been unable or unwilling to resolve.

At this point, the president would do Armenians a tremendous favor by announcing his resignation, and laying out a succession time frame.