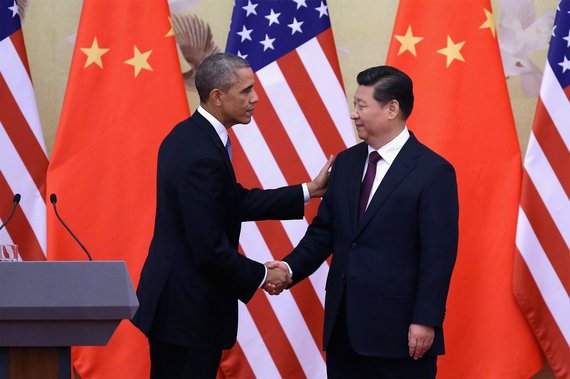 Chinese President Xi Jinping will be in the U.S. for his first official state visit later this month. As President Obama prepares to receive him at the White House with a state dinner and a 21-gun salute, Xi's regime is carrying out an unprecedented attack on Tibetans and civil society in China. After the U.S. spent decades pursuing a failed 'quiet diplomacy' approach to promoting rights and freedom in Tibet and China, now is the time for the President to turn up the volume and speak out publicly.

Since taking over as President in 2013, Xi Jinping has targeted everyone who is likely to have an alternative opinion to the Chinese Communist Party - this means lawyers and rights advocates, civil society leaders, journalists, academics, Tibetans, Uyghurs, Christians and anyone else who may be attempting to practice religion, protect culture, defend the environment, promote rights, or push for more political openness.

This past summer alone, at least 323 Chinese lawyers and rights defenders working for human rights, religious freedom, environmental protection, labor rights, etc., were disappeared, detained, tortured or harassed. And as this crackdown was underway, one of the most high profile Tibetan political prisoners, 65-year old Buddhist monk and revered social activist, Tenzin Delek Rinpoche, died in a Chinese prison after 13 years of torture. Protesters in his home region were shot at for demanding the return of his body and now thousands in the area are living under military lockdown.

Xi Jinping's hardline approach surprised many. When he first took power, observers speculated that this modern Chinese leader, who had even spent time in his youth studying agricultural technology in Iowa, might usher in a new era of openness and liberalization. In fact, the reality has turned out to be the opposite.

Determined to crush even the slightest perceived opposition to his hold on power, Xi has escalated state repression of civil society on multiple fronts, overseeing the drafting and implementation of a spate of draconian laws on NGOs, cyberspace and 'National Security,' while aggressively targeting thousands of activists.

In Tibet - where at least 143 Tibetans have now lit themselves on fire to protest the suffocating repression they face under Chinese rule - the situation is going from bad to worse, with the Communist Party recently announcing its intentions to tighten control and stamp out the influence of the Dalai Lama, including plans to choose his successor.

For many Tibetans and rights advocates, witnessing this new low that Xi's policies have brought makes it clear that something needs to give - that world governments need to change their approach to Beijing.

For more than two decades, politicians and business leaders have maintained that the opening of China's markets would open China's political system and therefore bring greater rights and freedoms, including to Tibet. Eager to secure smooth access to Chinese markets, they argued that moving embarrassing discussions about Tibet and human rights out of the public spotlight and behind closed doors would allow Chinese leaders to save face and make them more open to substantive discussions and reforms.

But this 'quiet diplomacy' approach - embodied by bilateral dialogue processes that see human rights issues relegated to confidential meetings between Chinese officials and their counterparts - has utterly failed to improve the human rights situation in Tibet or China. Instead, it has let Chinese leaders off the hook entirely, ensuring there is no real price to pay for trampling on human rights in China or Tibet, not even the embarrassment that China used to suffer during public debates or discussions.

In 2009, long before Xi Jinping even took office, the Obama administration took quiet diplomacy to a new level of quiet when then Secretary of State, Hillary Clinton, brushed off the entire subject of human rights on the eve of her first trip to China. She said the issues were important, "but we pretty much know what they are going to say," implying that discussing human rights issues was a waste of time.

Whatever the intentions of the White House, the message received in Beijing was that the United States under President Obama was not going to prioritize the issue of Tibet or human rights in China. It was clear that increased repression wouldn't result in any substantive reaction from the international community if the so-called "leader of the free world" was taking such a weak approach on human rights.

Now, the situation in Tibet and China is so bad that some China-watchers who previously championed the 'trickle-down-democracy' arguments cannot ignore the ugly reality: China under Xi Jinping has doubled down on the authoritarian approach, perhaps more so than at any other time since Mao.

So how does the U.S., and any other democratic country for that matter, begin to address such a massive problem? The place to start seems clear: abandon 'quiet diplomacy' - it is not working.

On the occasion of the Chinese President's first state visit to the U.S., the time has come for President Obama to speak out - unequivocally and publicly - against Xi Jinping's crackdown in China and Tibet. The President should call on Xi to immediately halt the ongoing assault and release all prisoners of conscience, including mentioning by name Tibetan Buddhist leader Khenpo Kartse, Uyghur intellectual Ilham Tohti, Nobel Peace Prize laureate Liu Xiaobo, and human rights lawyer Wang Yu.

Of course, a public statement alone is not enough to halt Xi's crackdown. There are many tools in the diplomatic toolbox that can and should be used to support the people of China and Tibet who are struggling to achieve their basic rights and freedoms. But, at least to start, a strong public statement is the most emphatic signal the President can give to his Chinese counterpart that the current situation is unacceptable.

After nearly two decades of toothless attempts to get the Chinese government to improve its human rights record, it is time to do things differently. The days of fruitless bilateral dialogues should be over. Xi Jinping must be told, in the clear light of day and for the whole world to see, that we know what he is doing, that we do not accept it, and, as a so-called partner on the global stage, we expect him to do much better.