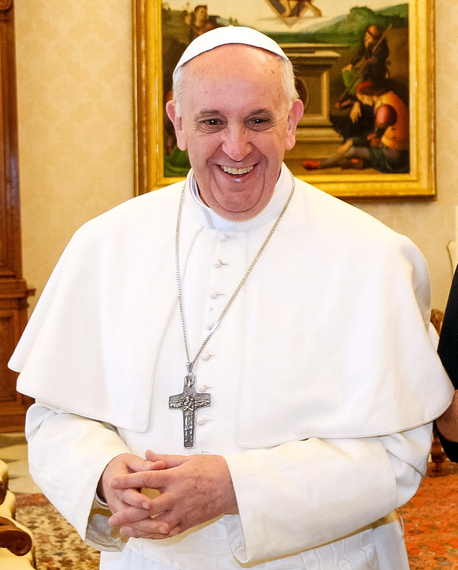 It's not easy to criticize the coolest Pope, ever.

Pope Francis smiles for selfies, Tweets, says yes! to the Big Bang and evolution, waves from his popemobile and against tradition, washes (oh the horror!) the feet of women on Holy Thursday.

I'm not Catholic but when this Pope speaks, I listen. I don't expect to agree with everything he says but by God, he makes me want to.

Still, Pope Francis's command to end world poverty doesn't square holy with me when the church still insists artificial contraception goes against the "natural laws of God" to go forth and multiply.

Simple compassionate math says when you make more kids you make more mouths to feed. Never mind couples who don't want a houseful. Plenty opt out altogether which Francis in his wisdom of raising a family, lovingly calls a "selfish choice."

Scolding birth control is an archaic man-made patriarchal mandate that commands women to be involuntary breeders and over populate the planet.

Before birth control went worldwide thanks to the work of Margaret Sanger who fearlessly fought church hierarchy, women birthed babies without stopping.

Emaciated children crowded into small living spaces. Mother's young bodies wilted from delivering too many children too close together. Women dangerously aborted multiple pregnancies to spare their babies from a life of famine. Weak, depressed and hopeless, many mothers committed suicide.

And so the church despite all its massive good works, is complicit in suffering.

Take the population crisis in the Philippines.

"In a city like Manila, where the maternity wards are so full that new mothers have to share one bed with two other patients, the bill (to provide birth control pills and condoms for couples in need) would give Filipino women the tools they need to choose their family size.

But in the deeply Catholic Philippines, church leaders still hold sway over politics. The president of the Philippines, Benigno Aquino III, has been threatened with excommunication for his support of the bill."

Of course most modern Catholics don't believe every sperm is sacred. "They're well aware of the Vatican's pronouncements," wrote Frank Bruni in his piece, "Be Fruitful, Not Bananas," They just prefer to plug their ears."

Some wishful thinkers think the church offers wiggle room for married couples to use their "individual conscience" about family planning but the reality is, contraception is still a mortal sin and an act of "individual disobedience."

So when the sympathetic priest counsels a couple he's forced to speak out of two sides of his mouth, "Sure, go ahead and pop on that condom, take birth control, but just so you know (smiling sadly), I'm obligated to tell you you're headed for eternal Hell."

I'm a former Methodist, now a Unitarian Universalist (your basic heretic) so I don't grapple much with doctrine. If a teaching doesn't jive with common sense and Golden Rule 101, I balk.

In the article "Contraception, Conscience and Church Authority" George Sim Johntson reminds that the good Catholic doesn't just grin and bear His will, she heroically conforms to it.

"The implicit message is: God's will is something you deal with while gritting your teeth."

"But since gritting your teeth is not fun, and God doesn't want us to be upset about the choices we make, then follow your conscience. There are so many fallacies here; it would take a book to address them. A short response is that saints not only heroically conform their lives to the will of God, but also love that will. Are we not called to imitate them? If we do, even the sex might be better. As Benedict XVI points out in Deus Caritas Est, eros is most fully itself when governed by agape."

Wow, that's quite a stretch. Unprotected sex as an aphrodisiac.

I've never met a woman who says she gets turned on by the thought of an unwanted pregnancy at the end of her partner's orgasm. Making a baby when you don't want a baby isn't titillating, it's terrifying.

But religion is masterful at managing cognitive dissonance. You just think you don't want a baby or you can't afford a fourth, but yield to God's will rather than your own selfish needs and the blessings will appear.

Even God couldn't spin this one

I admire Pope Francis for his softer language. Still, his charm doesn't distract me from the church's most glaring contradiction, finger-wagging birth control while commanding the world to end poverty.

But when you spend this much pontiff power imploring the world to end poverty isn't the next logical step one message how? And that's of course, to use contraception.

But the sad fact is little has changed at RC central.

"He's not refashioning doctrine;" says Bruni, "he's reassessing the frequency and stridency with which it needs to be flung at people, especially when it contradicts their experience of the world and undercuts their connection to the faith and the church."

Sure, permission to be less fruitful sounds like an impressive concession for the 2,000 year old church but the Vatican's compromise boils down to this quaint advice:

1) Use the highly unreliable rhythm method where women abstain from sex during ovulation (So, "oops" is God's will vs. the woman's reproductive freedom)

Some church leaders still think digging in on dogma is good for the whole world.

"The church's teachings are timeless. They cannot be changed, even though adherence may be upsetting to some," writes Cardinal Donald Wuerl in a piece for the Washington Post. "That the church is built on a rock with fixed beliefs is a positive feature, both because it can withstand the shifting winds of public opinion and because of the cherished content of our faith itself, which fosters love among Catholics and non-Catholics alike."

But the church can't afford to live in denial. It might even reverse its mass exodus if it meets followers where they stand on contraception and admit (stop laughing) fallibility on this one issue.

I can already hear my Catholic friends. You just don't get it Laura, Catholic concessions aren't given by inches, they're given by centuries.

Sorry, but when Pope Francis commands the world to hear the cry of poverty, he's also compelled to listen to the cries of millions who don't have the means to control family size or the will to disobey the Holy Father.

The Vatican should be charged with spiritual malpractice until it sanctions the use of contraception worldwide.

No institution, no matter how powerful is immune to shifting views. To stay viable the Roman Catholic church will have to do the most radical and in my view, humble of all acts, admit that many of God's "immutable" truths are man-made patriarchal rules long out of step with the compassionate needs of the people.