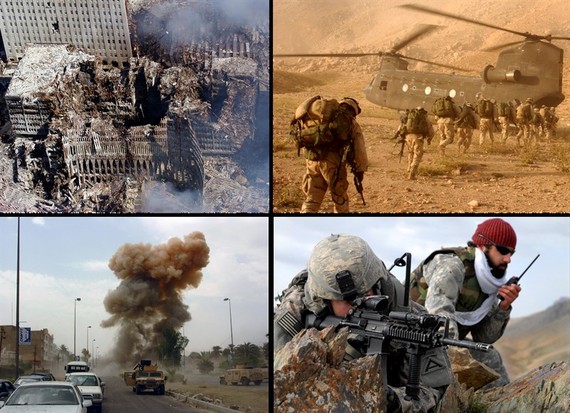 Another September 11 is upon us and the usual calls for "vigilance," "resolve" and "remembrance" have begun. For Americans, this has become a quasi-religious event, with the kinds of rituals and communal utterances once reserved for holy days like Christmas and Easter. Except, in this case, it is not a call to love thy neighbor or one's enemies, but to continue what can only be described objectively as another failed government "war."

The War on Terrorism is as complete a failure as the War on Drugs. Both share the hallmark symptoms of all such government endeavors: continually increasing budgets, exploding proliferation of what is made war upon, increasingly harsh measures following each successive failure and enormous collateral damage.

At the center of both debacles is the same fundamental issue: the failure to recognize government intervention as the root cause of the problem itself.

The attack fifteen years ago was not the first terrorist attack perpetrated by foreigners on American soil, but it was by far the worst. And just as it does for so many other government-caused catastrophes, the public demanded the government "do something" about it, rather than stop doing the things that motivated the killers.

Or, maybe the public simply went along with the government-media complex's unison exhortation for a "war on terror," along with its promotion of the ludicrous "hate us for our freedom" explanation of the motivation behind the attacks. Never mind that every single terrorist ever captured and questioned by U.S. authorities - including those prosecuted for the 9/11 attack itself - have cited U.S. military intervention in the Middle East as their motivation.

The unwillingness to accept the perpetrators' own words for the motivation behind their attacks is unprecedented in American jurisprudence. For any other crime, correctly identifying the motive is a key element of the prosecution's case. Failure to prove a compelling motive can mean acquittal, even for a guilty defendant. Yet Americans show no interest in the motive for this crime, defaming anyone who talks about it for "blaming America."

If a wife catches her husband with another woman and shoots him, nobody claims she hated him for his freedom. Acknowledging her true motivation is an integral part of proving her guilty. But for the War on Terror, like most government programs, common sense and logic doesn't apply.

Regardless of whether one faces reality concerning the motive for 9/11, one thing is certain: terrorism has proliferated enormously since the government declared war upon it, just like drug use. It's time to ask ourselves exactly what we hope to accomplish with another fifteen years of bombing, invading or sanctioning destitute countries full of people with nothing left to lose.

There are two possible reasons for continuing the "war:" deterrence and revenge. The former is the politically correct reason. The latter is not, but, let's be honest with ourselves, just as real. When Americans post "never forget," they are expressing a range of emotions, but among them is the same understandable anger that motivated Sam Houston's soldiers who exclaimed "Remember the Alamo!" while visiting a merciless slaughter upon Mexican soldiers, even after the Mexicans began trying to surrender.

If revenge is the motivation, it has been accomplished. The 9/11 attackers killed approximately 3,000 Americans. The War on Terror has since killed millions of inhabitants of the Middle East, most of them as innocent as the Americans killed on 9/11. It has ransacked two entire nations, indirectly led to chaos in several others controlled by ISIS and other jihadist groups, and created the refugee crisis we now find ourselves dealing with. For fifteen years, every day has been 9/11 for populations in Iraq, Afghanistan, and several other Middle Eastern countries.

At some point, even Sam Houston's soldiers stopped the slaughter.

As for deterrence, it should be obvious by now that those of us who always maintained that fighting a conventional war with bombers and ground troops does nothing to deter individual terrorist acts were right. This should be intuitive. How could a conventional army fighting a war thousands of miles away possibly do anything to deter terrorists like the Tsarnaev brothers, who cited those very wars as the motivation for their attacks?

An entire generation of Middle Easterners who weren't even born on September 11, 2001 will turn fifteen years old tomorrow. They are approaching adulthood having lived their entire lives under the constant threat of death from above, with foreign troops of an alien culture patrolling their streets by day and kicking in their doors at night. Only a fool could expect anything but hatred, rational or not, from people in this situation.

Only a government could suggest this epic failure simply requires more funds spent on the same strategy to turn decades-long failure into success. It's the same fairy tale taxpayers are told about education, poverty, or drugs. The dynamics don't miraculously change nor the government become suddenly competent when it is fighting terrorism. But it does create even more lethal problems for those it purports to help.

Tom Mullen is the author of Where Do Conservatives and Liberals Come From? And What Ever Happened to Life, Liberty and the Pursuit of Happiness? Part One and A Return to Common Sense: Reawakening Liberty in the Inhabitants of America.