A short six months ago, officials in the United States and Europe were equating the pro-Russian separatists battling the Ukrainian army with drunken fools aimlessly running around the country causing mayhem. The description may not have been diplomatic, but it was an apt metaphor for how the separatists acted and the way they behaved towards civilians who found themselves caught under their wrath. Stories of abuse, extrajudicial killing, and harassment of the local population by the separatist occupying forces were common from human rights monitors and from reporters on the ground. Indeed, by July 2014, the "drunken fool" label turned out to be less harsh than the "murderer" or "killer" stigma that should have been attached to them; as if to underscore just how uncontrollable the pro-Moscow separatists had become, a civilian Malaysian airliner traversing eastern Ukrainian airspace was shot down from the sky by what western intelligence officials said was a rebel-fired air-to-ground missile. Nearly 300 innocent people were killed in that catastrophe.

If the separatists were drunks and hooligans last summer, they appear to be anything but in the current environment. In fact, whereas the Ukrainian army was chipping away at the separatist-controlled bastions of Donetsk and Luhansk before last September's ceasefire agreement, Kiev's forces today are struggling to hold their ground in fighting that self-proclaimed Donetsk Prime Minister Aleksandr Zakharchenko has called the beginning of a new offensive.

The United Nations estimates that approximately 5,100 people have been killed in eastern Ukraine since the fighting began in April 2014. An estimated one million people have been displaced from their homes, some fleeing across the border to Russia and others trekking miles upon miles west to cities that have yet to be damaged by severe rebel shelling. As is the case in all war zones, these numbers are not perfect and are highly likely to be conservative estimates. But, in Ukraine, you don't need numbers to tell you the true story. Rather, all you need is the image of the Donetsk airport completely leveled by months of artillery shelling and close-quarter combat, or the testimonials of a Ukrainian citizen who is forced to leave his home in order to escape the violence. As one Ukrainian told BuzzFeed's Max Seddon in an emotional, on-the-ground report, "They're transporting us like cattle, but it's still better than staying..."

The response thus far from the Obama administration has been limited to economic sanctions and diplomatic censure. Not that they're is anything wrong with that - thanks to the administration's behind-the-scenes lobbying of the European Union, Moscow is losing about $140 billion every year. The banking restrictions that are now in place, when combined with the slide in crude oil prices, is hurting Putin's wallet and depleting Russia's foreign exchange reserves. And yet, the Russian military is still supporting the separatists in Eastern Ukraine. As a matter of fact, not only are they supporting the separatists, but they are doing so in a way that is aiding and abetting the killing of Ukrainian civilians and soldiers, destroying Ukraine's two major cities in the Donbass, and ruining Kiev's shot at becoming independent. 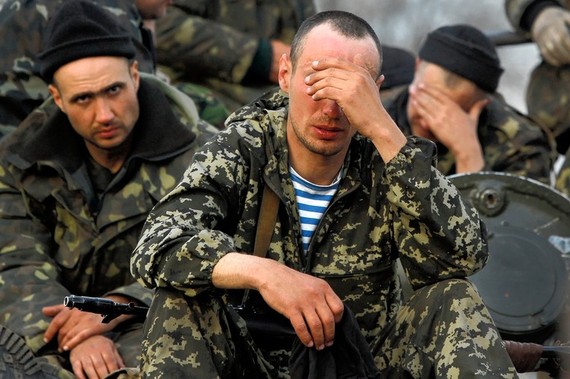 If a complete and deliberate violation of a ceasefire agreement and the indiscriminate shelling of cities does not stir the west to bolder action, then it's difficult to see what will, short of Russian air strikes on Ukrainian army positions. Thankfully, the Obama administration - which has refused to endorse the option of providing defensive weapons to the Ukrainian military - may finally be reviewing their policy. The sanctions path so far has clearly not done anything to deter Vladimir Putin's behavior, and unless the administration is willing to wait another 12 months, it is unlikely that it will in the immediate future.

When a former U.S. Ambassador to NATO, two former U.S. ambassadors to Ukraine, a former NATO Supreme Allied Commander, a former undersecretary of defense, and bipartisan majorities in both the House and Senate are all calling on Washington to send defensive military equipment to Kiev so the country can protect itself, there is something to the argument.

Sure, it may not work; the policy may backfire, the Ukrainian army may not be able to use the weapons effectively or they may lose some to the rebels. Putin may even decide to escalate. But guess what? Putin is already escalating. Making it more costly on Russian officers and soldiers who are stationed on Ukrainian soil, when combined with the tens of billions of additional dollars that Moscow will lose to U.S. and European sanctions, could actually coerce Moscow and its separatist allies to negotiate seriously.