Like many people, I was shocked and outraged over the lax punishment handed down to a young man who attempted to rape an unconscious peer of his at Stanford University last year. That case, and the judge's inexplicable decision to impose a too-lenient sentence, have punctuated once again how painful it can be for victims of rape to get the justice they deserve.

Slut shaming, blaming the victim and falling back on straw-man arguments are nothing new, and television police procedurals have done a good (if not very accurate) job of showing what happens when the victim gets put on trial instead of the accused.

But what about those women (and men) whose attackers never even make it that far in a court room? In far too many jurisdictions in California, there is a staggering backlog of rape test kits that have gone unprocessed by crime labs, leaving thousands of victims in limbo -- and leaving their attackers potentially free to walk the streets.

There is a staggering backlog of rape test kits that have gone unprocessed by crime labs, leaving thousands of victims in limbo...

This is not a problem confined to California. Nationally, there are an estimated 400,000 sexual assault test kits awaiting processing. The statute of limitation on rape varies from state to state, but with that many kits awaiting testing (and with tests running anywhere from $800 to $1500) many victims will never see justice because the evidence was sitting in cold storage throughout the entire window of time to prosecute.

Many news outlets have reported on the backlog, from Full Frontal with Samantha Bee to this story from the San Francisco Chronicle which recounts the harrowing abduction and rape of two teenagers by a man whose DNA was already in the national criminal database, and who would have been caught for the terrifying and brutal kidnapping and rape of two young women, had their rape kits been examined.

It's inexcusable that women and men have to wait so long for justice -- and that for some of them, justice will never come.

This is not just appalling. It's inexcusable that this kind of backlog has been allowed to develop. It's inexcusable that women and men have to wait so long for justice -- and that for some of them, justice will never come. They did all the right things: overcoming the fear and stigma of being labeled a "victim"; reporting their assault to the authorities and putting their faith in the justice system.

The justice system, though, is letting them down. And we can't let that happen. We need to build on the efforts of local officials who are tackling this problem within their jurisdictions.

Alameda County District Attorney Nancy O'Malley has been working steadily to reduce the backlogs in Alameda County (California's seventh largest county, with more than 1.6 million residents). She has used funds from her own office to match grants from outside groups to help reduce the backlog across the 19 different police departments she receives.

California Attorney General Kamala Harris announced last year that her office had won a $1.6 million grant to do the same here in California, and Assemblymember David Chiu has introduced AB 1848 to mandate that police departments collect and report the number of untested rape kits in their possession.

Sadly, this is not the first time this bill has been introduced. In fact, it has been introduced in one form or another for several years now -- including my time in the Assembly, when I introduced it in 2011. My bill, AB 855, didn't make it through because it was deemed too expensive to reimburse local governments for clearing their backlogs.

In fact, each time a member of the Legislature has taken up this cause, the bill has fallen short for the same reason most good policies don't make it: money. The argument has been the same every single year. Opponents say that testing all these kits is expensive, in both material and man hours, and police departments laboring under reduced funding (virtually every police department in California) can't afford to take on the additional costs of testing all these kits.

The Great Recession was over six years ago. Every single government agency is better funded today than it was when I was in the Assembly. As Attorney General Harris has shown, there are grants available, and there are even nonprofit groups working to provide funding. 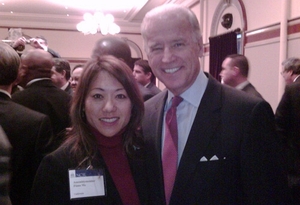 We have the resources to test these kits. This has become such a pressing issue nationally that Vice President Joe Biden will be guest starring in an episode of Law & Order: Special Victims Unit that focuses on the backlog of untested rape kits. I'm grateful the Vice President will be shining a national light on this issue, because it needs more attention than it has received. The old saying "justice delayed is justice denied" is 100 percent accurate here, and it's long past time we stop denying justice for these women and men.