The straw that broke the camel's back came in the form of a text message from my wife. This is what she sent: 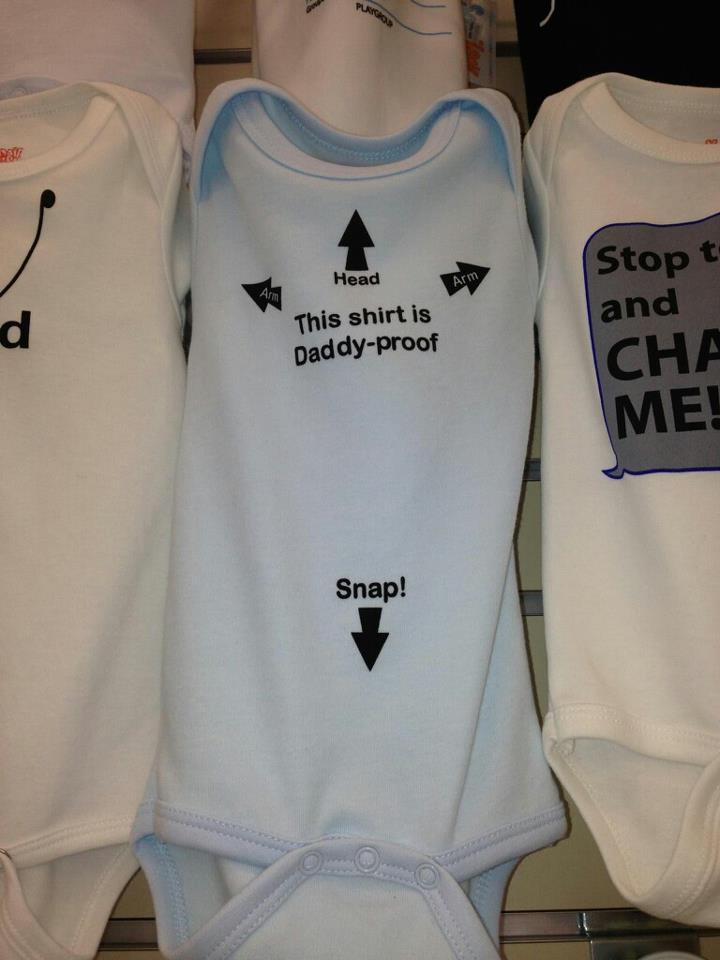 I know what you're thinking: Really? You're upset about this? Get a life. I get it, and you're not alone. Hell, I showed it to a few fathers in my dads' group and many of them thought the same exact thing. Some even said it was funny and told me I was being oversensitive. Don't get me wrong, this ridiculous onesie in and of itself is not the end of the world. I didn't see this picture and suddenly reach for my pitchfork, start a petition and rise up in fiery vengeance with the goal of putting Sara Kety -- the manufacturer -- out of business. And frankly, I've seen worse instances of perpetuating the idiot dad stereotype.

So, why was this bothering me so much?

Even if you find this funny -- which I don't -- then it should be funny if directed at moms too, right? So, I immediately began searching out the "this shirt is mommy-proof" onesie. But, guess what? They don't make one. Curious, don't you think? After all, if this is all in good fun and I'm just missing the joke because I'm too sensitive, then everyone else would find it funny. But apparently, it's only "funny" to joke about dads being inept parents. Because if Sara Kety made a product basically calling moms idiots who don't know how to take care of their babies, there would be a mommy backlash of epic proportions. But since dads lack the same muscle and influence, it goes under the radar.

The reason I'm so bent out of shape about this is because it's a small problem that's indicative of a much larger and more serious issue.

On one hand, dads hear everyone telling us how important involved fatherhood is. And I agree completely. Studies have proven children with involved dads have enhanced cognitive abilities, stay in school, have increased self-confidence, wait longer to have sex for the first time and are less likely to be depressed. Furthermore, American men are becoming stay-at-home fathers in record numbers. And even if they're not staying at home, men are paying more attention to work-life balance and heeding the call of women everywhere to step it up at home by taking on more of the household and childcare duties.

All that is well and good and encouraged. But here's the rub.

The same people -- mostly moms -- who claim to be overworked and desperate for dads to do more are all too often the first ones to criticize them for not doing things right when they do step up. And by right, I mean their way. I've seen dads criticized and made fun of for how they dress the baby. For how they feed the baby. For how they handle things differently than moms. Despite the fact that most first-time moms are just as clueless and confused as first-time dads, it's chic to make fun of the dads, while moms are assumed to know absolutely everything. As if the parenting instruction manual is imprinted in the female DNA. The fact that mothers face an unfair societal expectation to be a perfect parent from the get-go is a separate, albeit deserving, issue. But it's no reason to crap all over the very same people you just asked to help more.

Guys see the low bar set for dads on commercials and TV shows and will only rise high enough to meet it. And when their wives dress the baby in a shirt that basically calls them idiots, they'll soon learn they're expected to be know-nothing dolts, so there's no need to improve.

I'm not looking to pull the shirt from shelves or put anyone out of business (as if I had that clout). If there's a market for it and it sells, so be it. And while I'm all in favor of witty, legitimately funny stuff that pokes fun at dads, I don't think this fits the bill. I think because no one would dare make fun of mothers in this fashion, it's harmful to attack dads. More than that, I just don't understand it. If you want to help raise the level of active and involved fatherhood, why on earth would you go out of your way to deride them with crap like this?

This onesie on its own isn't so terrible, but combine it with all the other negative messages guys receive. Dads on TV who can't take care of their kids on their own. Dads in diaper commercials who are the "ultimate test" because of their incompetence. Dads who are told they're not doing things right simply because they do things differently. I genuinely believe the smaller stuff like the onesie piggybacks on all the other crap we absorb, until it becomes part of a defeatist attitude and a self-fulfilling prophecy in which we all lose.

So, while things like this might seem irrelevant to many and certainly aren't the end of the world, it is worth speaking up. I can only hope more people realize how harmful this is to men seeking to be involved dads, and avoid buying it so companies will realize it's no longer profitable to make fathers a punchline.

These Insulated Lunchboxes That Are As Cute As They Are Practical