The African American Civil Rights Movement of the 1950s and 1960s failed more than it succeeded. Yet, in the popular history of the Civil Rights Movement, we never talk about its failures. Popular Civil Rights history makes the movement into a fairytale: Once upon a time there was racism; then Martin Luther King Jr. marched into town; he slayed the evil racism; and we all lived happily ever after. The End. Boiled down to its essentials, nearly every Civil Rights movie follows this basic script. It would be nice if this history were true, but just about all of it is false.

Consider the 1954 Brown v. Board of Education decision. We like to say that this decision desegregated America's schools. But today in my city, Washington D.C., which is more than a third white, there isn't a white child in any of the schools in my neighborhood. For a while there was some progress toward desegregation, but that progress was reversed by a renewed commitment to segregated schooling. When we teach the history of the Brown decision, we need to say that it was the decision that failed to desegregate America's schools.

One way our popular Civil Rights history distorts the movement is by ignoring that it was a movement for economic justice. We have forgotten that the march where Martin Luther King Jr. gave his "I Have a Dream" speech was a march for "Jobs and Freedom." Among the demands of the march was for the government to provide "Jobs for All" and to require that employers pay a living wage. King was killed in Memphis while supporting black sanitation workers who were on strike for the recognition of their union, safe working conditions, and a decent wage. Today, African Americans continue to suffer from the highest rate of joblessness and low wages. We have not overcome the core economic challenges targeted by the Civil Rights movement. 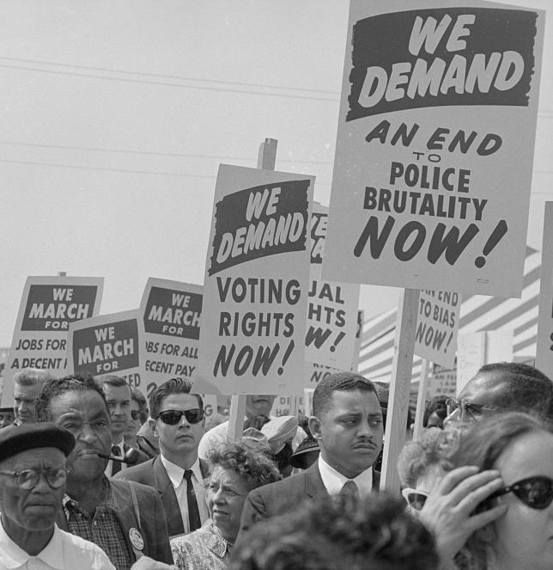 Occasionally, I hear people speak as if the Civil Rights concern about police brutality began with the killing of Michael Brown in Ferguson, Missouri. But this is not correct. It did not begin with the beating of Rodney King in Los Angeles either. Police brutality also was a key concern for the civil rights activists of the 1950s and 1960s. This is another area where the activists did not succeed in changing American society.

There are three important reasons for acknowledging the failures of the Civil Rights movement. First, I think we are disrespectful to the activists who struggled and sacrificed for the movement when we misrepresent what they were fighting for. How is it an honor to Martin Luther King Jr. when we ignore the fact that he was deeply concerned about economic justice? How is it a tribute to the movement that we have erased its connections to the labor struggle?

The second reason we need to acknowledge the movement's failures is to recognize that there is much Civil Rights work still to be done. We can honor King more on Martin Luther King Day by working on the issues he fought for but did not complete rather than by doing some random community service. We may have had greater success in the struggle for a higher minimum wage and in the struggle against police brutality if we had continually recognized these issues as the unfinished business of the Civil Rights movement.

The third reason is that we need to make clear to all Americans that racism did not end in the 1960s. For many years, until recently, a majority of whites believed that the country had done enough for blacks to achieve equality with whites. When we whitewash the Civil Rights movement and pretend that it conquered racism, it is easy for people to come to this conclusion. If we tell an accurate Civil Rights history where America's schools remain separate and unequal, where the struggle for jobs and decent wages fail, and where there is no progress in reducing police brutality, it becomes harder to believe the fiction that King conquered racism. It becomes clear that America needs many more changes before there is equal opportunity for all.

Algernon Austin is the author of America Is Not Post-Racial: Xenophobia, Islamophobia, Racism, and the 44th President which is the only book to analyze the 25 million Obama Haters in America.