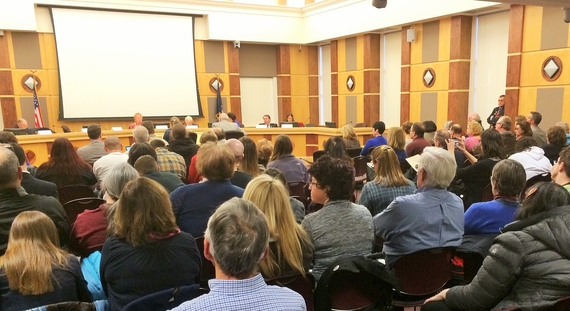 In our private lives, we have quite a bit of say over how we spend our money. Granted, an employer or client ultimately decides whether and what amount to pay us, but if we want to spend more on a house than on vacations, or more on our children's education than on dining out, that's our decision.

Seems strange, then, that when it comes to our tax money, our say often doesn't amount to much. Often cities, counties, states, and the federal government take minimal input from the public on their budgets--ironic, given that a budget is widely viewed as the single most important policy a government approves. It's almost like taking the decision about what house to buy away from the homebuyer.

I have been thinking about this for a few, somewhat contradictory reasons. I read this piece from Arizona, where the Governor decided to increase both transparency and input opportunities on his state's budget, but the state House decided "not to allow public comment during departmental budget hearings to be held over the coming weeks." Scheduled public hearings won't help much because they'll happen without any legislative budget to discuss.

On the other hand, more and more cities and state agencies are taking steps to increase public involvement in the city's budget. San Antonio, Texas, used the user-friendly tool "Balancing Act" (in both English and Spanish) to help the public get their hands dirty figuring out how to manage city finances. Other cities, including Hartford, Connecticut, have taken similar steps with online budgeting tools. And in Austin, the "Budget in a Box" gives groups and individuals a chance to talk with one another about how to manage city finances.

In San Antonio, officials found more than 1,200 unique users spent an average of more than ten minutes on their tool, suggesting they did more than offer knee-jerk reactions to the questions of what to fund and how much. But if this were just a game to make the public feel better, I would not have taken note. On the contrary: the city's adopted budget for Fiscal Year 2016 (their largest ever) included a $23 million increase in street maintenance and a $10 million increase in sidewalk/pedestrian safety, all while reducing property taxes, all of which were the priorities citizens had in their responses.

Perhaps even more interesting is the explosion in the use of "participatory budgeting," which got its start in Brazil but has spread to cities small and large across the U.S. This strategy gives the public the ultimate say over the way a portion of the budget gets spent, through a secret ballot vote that the sponsoring city or other agency commits to respect and implement.

So, why such a contrast? Why would some government officials want to keep the public out of budgeting and others bring the public closer in? As to the latter, an interesting study in, of all places, Russia found that participatory budgeting actually "increased local tax revenues collection, channeled larger fractions of public budgets to services stated as top priorities by citizens, and increased satisfaction levels with public services. " It stands to reason that if you ask the public what they want to buy, and how much they want spent on those services, they'll be happier.

As to why public input into budgeting might not be such a good idea, perhaps elected officials fear that greater exposure of their budgetary decisions would shine a brighter light on questionable moves that favor top donors or influential special interest groups, rather than the public as a whole. Perhaps they think that increased engagement would take too much extra time or, ironically, cost a lot more money than the status quo. But that perspective overlooks the unintended consequences that can accompany budget choices made without the public: the ongoing Texas public school finance fight comes to mind. Neither time nor money was saved; if anything, it's taken a lot longer and cost a lot more than lawmakers ever intended.

To be sure, changes in the way governments involve the public in budgeting would require a paradigm shift for just about everyone: elected officials, public administrators, and even the public themselves. But it could end up making it easier for lawmakers to stomach otherwise difficult choices around tax rates and funding levels. After all, if a lawmaker can show how a budget truly reflects what the constituents want, that's worth a lot in political, and campaign, capital.