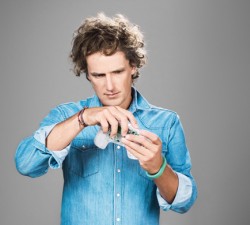 The man behind the Jambox, the UP band, and, soon, the OUYA (say it "Ooh Yah!") gaming console is changing the business of product design.

FUSEPROJECT FOUNDER YVES BÉHAR STRIDES across the empty white box of his design firm's new offices in Potrero Hill, the orange soles of his Undefeated sneakers echoing off polished concrete floors. In a few weeks, this unadorned reception area will be a public art gallery. Beyond the gallery's white door, 58 Fuseproject team members -- digital and industrial designers, user experience developers, branding and marketing specialists -- will move into the open space that Béhar calls a "creative pit," which surrounds a pyramid-like, two-story-tall tower of bleachers. Devoid of cubicles, it's a noisy, buzzing hive of activity, though less close quartered than Fuseproject's old, sketch-littered offices in SoMa. ("We have desks now!" exclaims a public relations manager; each station is surrounded by a throng of caged-back Herman Miller Sayl chairs, which the firm designed in 2010.)

Béhar is dressed casually in a black sweater, chest hair peeking from the V-neck, and dark cuffed jeans -- a decidedly sexier spin on Steve Jobs's black-turtleneck-and-dad-jeans uniform. He runs a hand through his trademark tousled curls and pushes up his sleeves. His left wrist is circled by a mint green Jawbone Up Band, a fitness-tracking device designed by his firm in 2011 that records his sleep cycles, walking distance, calories burned, and food intake. The band, he says, broke him of the "delusion" that his 45-minute gym routine was sufficient. Now he keeps tabs on his physical exertion even as he chases his kids through the park or treks up Mississippi Street for lunch. On his right wrist is a tangle of colorful braided bracelets with a small silver totem dangling from one, a memento of his annual surf pilgrimage to Indonesia. He taught himself to surf six years ago, at the age of 39. "Sometimes you can find peace of mind by transferring yourself to different situations. They're just reminders to stay... calm," he says. Neither wrist ever goes bare: On one, a gadget that pushes him toward constant activity and dialed-in consciousness; on the other, a mental escape, a reminder of open seas and off-the-grid beaches.