A Spanish runner has shown the world that sometimes, just sometimes, winning isn't everything.

Last month, Spanish athlete Ivan Fernandez Anaya impressed the world by giving up victory to do the right thing. According to El Pais, it happened as the 24-year-old raced a cross-country event in Burlada, Navarre on Dec. 2.

In second place to Abel Mutai, the Kenyan athlete who won a bronze medal in the London Olympics, Anaya suddenly had a chance to surge ahead. According to El Pais, Mutai mistakenly thought the end of the race came about 10 meters sooner than it did, and stopped running.

Then, he “looked back and saw the people telling him to keep going," Anaya told CNA. "But since he doesn't speak Spanish he didn't realize it."

So Anaya slowed, guiding Mutai to the actual finish line. 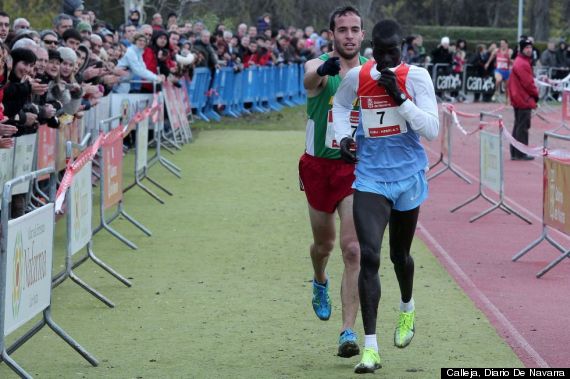 And he didn't think much of it, either. Anaya told El Pais:

"I didn't deserve to win it. I did what I had to do. He was the rightful winner. He created a gap that I couldn't have closed if he hadn't made a mistake. As soon as I saw he was stopping, I knew I wasn't going to pass him."

His actions may not have won him the match, or the approval of his coach, but they did get him a few new fans.

On Facebook, more than 500 friend requests have come in since the generous act, Anaya wrote on his blog.

The short YouTube video below shows the end of the race:

Ivan Fernandez Anaya, Spanish Runner, Intentionally Loses Race So Opponent Can Win
11 Inspiring Olympians
1 / 11
Kerri Strug
A member of the gold medal-winning all-around women's gymnastics team that represented the United States at the Atlanta Olympics in 1996, <a href="http://en.wikipedia.org/wiki/Kerri_Strug" target="_hplink">Kerri Strug</a> will long be remembered as the pint-sized dynamo who refused to give up -- even in the face of tremendous pain. Strug had been the last gymnast to vault for the United States in the final rotation in the finals of the Games. With the US team trailing behind the Russians, a strong performance from Strug was paramount. However, Strug under-rotated the landing of her first attempt and fell, damaging her ankle. Despite her injury, Strug got up and performed the vault again -- this time, landing it perfectly. She <a href="http://www.guardian.co.uk/sport/blog/2012/jun/19/50-stunning-olympic-moments-kerri-strug" target="_hplink">scored a 9.712,</a> securing the US team's gold medal. Strug's courageous performance has remained <a href="http://www.mercurynews.com/olympics/ci_21174415" target="_hplink">one of the most memorable moments</a> in the history of the modern Olympics.
YouTube/BeijingOlympicForum