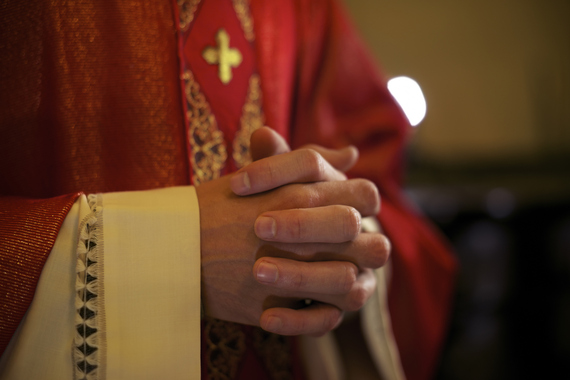 An Open Letter to Pope Francis:

I'm not one of the 1.2 billion Catholics, but I'd like to think you and I have a lot in common. We both believe in things that, when spoken out loud, can sound extremely odd; prophets, miracles, the Holy Spirit, Jesus, and of course, God in general. And we both proudly wear white after Labour Day.

But Pope -- even though I'm thankful -- and I truly am -- that you are speaking boldly to issues of poverty, violence, and a move away from the simplistic reductionism of us vs. them-- I can't help but point out a few things. How can I put it -- 50% of the population (you know, women) are excluded from leadership roles in the Catholic church, and all openly LGBTQ people are excluded from your church. So while I see that in history, your words are radical and perhaps have even shifted some minds into more of an openness around accepting people like me -- the policies are the same.

I am deeply saddened that you preach an equality that you cannot deliver, and that you do not truly believe is offered to all of us. In Congress you spoke of liberty, hope, and peace, and praised historical leaders who fought for freedom, saying:

"A nation can be considered great when it defends liberty as Lincoln did, when it fosters a culture which enables people to "dream" of full rights for all their brothers and sisters, as Martin Luther King sought to do; when it strives for justice and the cause of the oppressed, as Dorothy Day did by her tireless work, the fruit of a faith which becomes dialogue and sows peace in the contemplative style of Thomas Merton."

Pope -- I too "dream" of "full rights" for all people, so I wonder what you mean by that. I would say that this includes me being able to get married to another consenting adult, and to be able to give this adult my pension when I die, without being told we're not a 'real' marriage. I would assume this means that an unnamed Kentucky county clerk doesn't have the right to deny this to me. So I was a little CONCERNED when I read about your concern over "fundamental relationships":

"Yet I cannot hide my concern for the family, which is threatened, perhaps as never before, from within and without. Fundamental relationships are being called into question, as is the very basis of marriage and the family."

If you didn't mean to infer that this is about and against same-sex marriage, then you would've chosen different words -- you're a smart guy. If you didn't mean to validate those who would use your words as proof that their exclusionary actions are "holy" you would not have used the terms from the very lexicon that has been used to shame and shut us down for decades. The thing that bothers me the most, is that so many people have clung to your words from two years ago, in your famous quote when asked about reports of gay clergy, you answered:

"If someone is gay and he searches for the Lord and has good will, who am I to judge?"

I wonder though, if people heard that you also re-affirmed the church's position that homosexual "acts" are a sin, but orientation is not. So, you will not judge me if I'm gay BUT I can't ever be in a relationship or have sex? Pope --  that would be TOO much for me to have in common with you. And I think it's sneaky to try to separate the two -- that an orientation is something that lays stagnant as long as you don't do anything about it. Uh uh, Pope. Don't bait and switch me.

So, why am I surprised? As someone said to me when I expressed my anger -- "Well, the Pope is still Catholic..." to which I could only agree. The same doctrines are in place. So why should I expect such a huge shift in such a small amount of time? Why am I not thankful for the shifts that are happening -- in you riding in a Fiat and making jokes? I try to see the glimmers of light. I do.

But people are dying, Pope. Figuratively, and literally. I wish that your voice didn't contribute to this, but that would be naive.

Out of those 1.2 billion Catholics, a few hundred million are Lesbian, Gay, Bisexual, Transgender, or somewhere else on the non-hetero, non cis-normative spectrum of those you would consider "intrinsically disordered." And countless others who don't identify as Catholics anymore, because they were so spiritually abused or shamed for being queer, or so fearful of exile, that it's far too harmful for them to go to church, much less to be themselves inside of one.

And you speak of poverty, of helping the most vulnerable and the young. Those who are "trapped in a hopeless maze of violence, abuse and despair."

I wonder if you know that LGBTQ people have the highest rates of suicide, homelessness, and family exclusion than any other group. That most LGBTQ teens who are homeless have been kicked out because of their families' religious beliefs. That for the queer community, our main concerns are not actually about marriage or who will bake our wedding cakes, but about income disparity, lack of access to safe and adequate medical care, violent crimes, losing our jobs and homes, and most horrific, having these things occur under the guise of "holiness" and that the withholding of basic human rights would be justified as Biblical and blessed by God.

And here you are, Pope. Meeting with Kim Davis, who has embodied religious conservatives' concerns about same-sex marriage ruining society. And you tell her "Thanks for your courage" and "Stay strong". Not only are you loading the guns for arguments against people like me being included in church and in society, you are glorifying this behaviour.

I can see Donald Trump doing this, but you are considered a voice of God. And for better or for worse, people are listening to you.

WWJSTKD? What Would Jesus Say To Kim Davis? I don't know -- maybe, "Pay unto Caesar what is Caesar's and DO YOUR JOB." Jesus was a well-known objector, but it was always in order to protect the most vulnerable and those who did not have a voice and were pushed to the margins.

Some have and will call me ungrateful and ungraceful, for not recognizing the progress you've made. For not having hope for what you may do, or recognizing that you're human and that we're all fallible and works in progress. For not applauding your diplomacy.

It's hard to applaud you from outside of your doors.

And I have the luxury of just feeling hurt instead of actually being hurt -- I have a few degrees of separation between me and the judgement you kindly deliver. I am angry. Not because you are Catholic or because you think differently than me. But because you are a smiling face and a sense of humour and a lower-emissions car and a great speech, but you are the same. I hoped for more. Because you've hinted at more and you've danced around more and you've ridden your Fiat to the corner of more, then you turn around and bless the actions of those who will do anything and everything to deny my "full rights".

So please, Pope. Just be honest with us. Who are you to judge? You have answered your own question -- You are one to judge. Your definition of freedom is radically different than mine. You have thrown a crumb, but people are still starving.

I just ask that you don't pretend it's any different. It's too painful.

Do I hold out hope for you, Pope?

I do. I have to. You have the potential to shift history but you are hurting so many, and it's taking far too long to change course.

May you have the courage to be bold about including those who need your voice the most.