On Wednesday, a story featured on the Washington Times website about murdered Chicago schoolchildren was inexplicably paired with a photo of President Obama's daughters. The two girls are not mentioned in the story, and aside from having at one point been schoolchildren in Chicago have no connection to it. 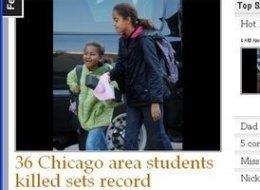 The Obama children, of course, are not actually mentioned in the news story. But somebody at the WashTimes thought it made perfect sense to insert the image of the underage White House occupants into a story about murdered kids in Chicago.

The photo was later taken down.

Editor John Solomon told Greg Sargent technology, not a person, was to blame.

"The theme engine, through automation, grabbed a photo it thought was relevant, and attached it to the story," Solomon said, acknowledging that the photo had gone up without a person seeing it. "There was no editorial decision to run it. As soon as it was brought to our attention, we pulled it down."