Iwo Jima veterans are outraged over Time magazine's decision to use the iconic World War II image of American soldiers hoisting a flag at Iwo Jima for the latest cover on "the war on global warming." The Business & Media Institute reports Iwo Jima veterans call the Time cover a "disgrace" and dismiss global warming as a "joke":

Donald Mates, an Iwo Jima veteran, told the Business & Media Institute on April 17 that using that photograph for that cause was a "disgrace."

"It's an absolute disgrace," Mates said. "Whoever did it is going to hell. That's a mortal sin. God forbid he runs into a Marine that was an Iwo Jima survivor." 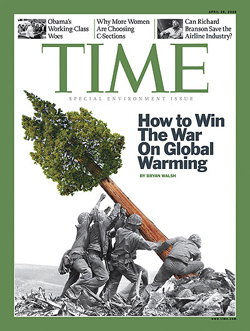 "The second world war we knew was there," Mates said. "There's a big discussion. Some say there is global warming, some say there isn't. And to stick a tree in place of a flag on the Iwo Jima picture is just sacrilegious."

Another Iwo Jima veteran echoes Mates' reservations about global warming being a worth cause for a reprise of the famous scene:

Lt. John Keith Wells, the leader of the platoon that raised the flags on Mt. Suribachi and co-author of "Give Me Fifty Marines Not Afraid to Die: Iwo Jima" wasn't impressed with Time's efforts.

"That global warming is the biggest joke I've ever known," Wells told the Business & Media Institute. "[W]e'll stick a dadgum tree up somebody's rear if they want that and think that's going to cure something."

"One of the things we do in the story is we say there needs to be an effort along the lines of preparing for World War II to combat global warming and climate change. It seems to me that this is an issue that is very popular with the voters, makes a lot of sense to them and a candidate who can actually bundle it up in some grand way and say, 'Look, we need a national and international Manhattan Project to solve this problem and my candidacy involves that.' I don't understand why they don't do that."