Not too long ago sushi, California rolls and teriyaki chicken were what defined Japanese food in America. The difference between what I ate in Japan during my summers as a child and a teenager, as opposed to what was called 'Japanese food' in the Western world couldn't have been more at odds with each other. Hot, delicious bowls of noodles in white pork broth, perfectly grilled pieces of chicken with a miso glaze, a charred, salted cod fish that almost melted in my mouth and the silkiest, milkiest of tofu; that was my Japanese experience with food. Back home though, few restaurants offered anything else other than sushi, for fear that Americans may find the cuisine too scary and exotic, unwilling to take chances if it meant losing patrons. Years went by without any real changes until eating out became a trendy hobby, and the Food Network took cooking to a new level.

These past few years saw Japanese food becoming one of many people's favorite cuisines and it's certainly not because of Americanized, watered down dishes. It's also less about plates of raw fish and more about unique, savory and authentic Japanese flavors. We have people's avid interest in food to credit for this sudden growth, as well as one of my personal favorite establishments: The Izakaya.

Rapidly growing and popping up in many cities across the country (up until now, you had to go to California to find them), izakayas are becoming a favorite among food enthusiasts. Nowadays, Izakaya fare is quickly becoming the new definition of Japanese food and for good reasons; the dishes served in these pubs are truly delicious. 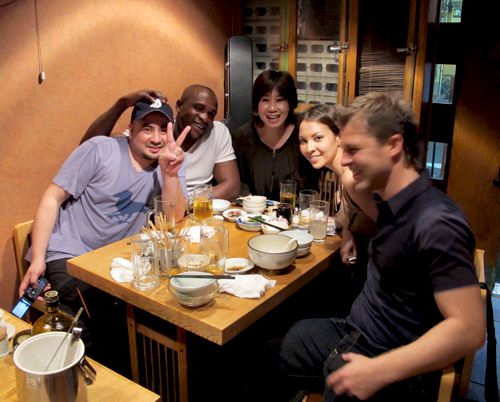 My brother, John, Yoko, myself and my husband Ben, at an Izakaya in Tokyo.

So what exactly is an Izakaya?

An izakaya is a drinking establishment (similar to a pub), serving tapas style food that's meant to be shared among friends. Some are casual, 'divey' looking bars with small wooden tables and chairs, while others are more traditional -- shoes must be removed as you sit on tatami floors. You also have the option to sit by the bar. Once seated, you'll be offered an oshibori (hot or cold towel depending on the season) to wipe your hands with, as you order a first round of drinks. You'll notice that the menu is very extensive though easy to navigate, as every dish has its own picture.

Every izakaya menu is different, however a majority of them offer popular items like sashimi, edamame, tofu dishes and various salads; heavier dishes such as korokke (meat and potato croquettes), mini pizzas and sausages; and of course classic izakaya favorites like grilled squid, gyoza (dumplings), okonomiyaki (Japanese pizza), yakitori (grilled chicken skewers) and yakisoba (stir fried noodles). The options are vast and you'll find yourself wanting to order more as each dish tantalizes your taste buds. You'll be asking for one additional perfect bite of savory and umami.

The drink menu is usually kept simple (unless it's a sake bar) with Japanese beers, white and red wine, shochu mixed drinks, and a few whiskies and liquors.

The protocol once inside is to have fun: These places were created to unwind after a hard day's work, so avoid going there if you're looking for a quiet, romantic dinner. These places can get very loud! Some of my best evenings were spent eating and drinking in such places, while sharing stories and laughing non-stop for hours. Izakayas offer comfort, plenty of laughter and amazing food. In smaller shops, owners take pride in every dish they put out, and the food you get is some times comparable if not better than that of a Michelin star restaurant. If you don't know much about izakaya food, familiarize yourself with these 10 Izakaya dishes to try for beginners. They've been an integral part of Japanese culture for over a century and are quickly becoming a fixture in the Western world. 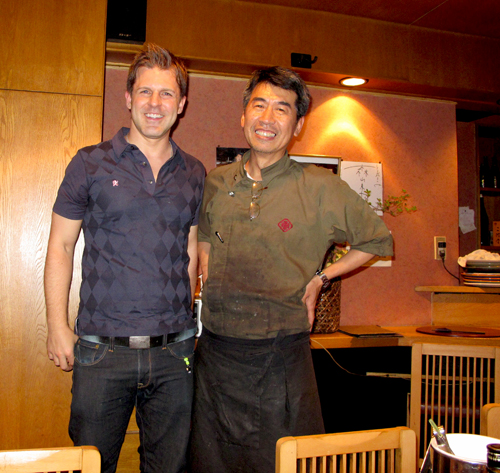 My husband Ben posing with a proud owner and chef of a small izakaya in Tokyo, cooking spectacular dishes.