The current financial crisis has caused American voters to think hard about which party can best deal with the current economic downturn, a decline which has the potential to become a global depression.

Traditionally, voters have tended to trust Democrats more than Republicans when faced with difficult economic times. One of the world's great comedy writers recently told me that Democrats should just broadcast one advertisement, showing the years 1929, 1987, and 2008, the worst weeks in the history of the Stock Market, and ask what all three had in common: a Republican was in the White House.

The polls from the past two weeks suggest that voters continue to lean toward Democrats as pocketbook politics become more salient. Senator John McCain has failed to reverse his downward slide in the polls since he temporarily "halted" his campaign when the news about the Wall Street meltdown first shook the nation.

But we must not lose sight of another long-term economic challenge that confronts the next occupant of the White House: rising inequality in income and wages. The last thirty years, not just the last three weeks, have been devastating for many Americans even as some sectors of the economy have thrived. 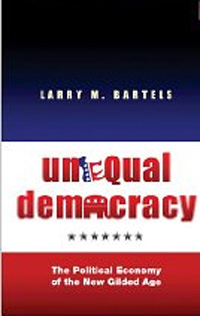 According to a recent Congressional Budget Office report, skewed economic growth (with the top 1 percent of households enjoying an average $180,000 increase in after-tax income in 2005 compared to a mere $400 for middle class households, and $200 for lower-income households) has produced the worst inequality since 1979 and the greatest concentration of wealth since 1929.

During the conservative era in American politics, the distribution of income and wages has become more unequal here than in other comparable countries, with the levels of inequality deteriorating under united Republican government between 2002 and 2006.

Some political problems are very confusing, leaving voters unclear about which party will actually make a difference. We are sometimes told that regardless of who has control of government, the new boss is the same as the old boss and conditions will remain the same.

But with some problems, in turns out, it matters very much which party controls the White House and Congress. This is the reason that every voter should read the new book by my colleague here at Princeton, Professor Larry Bartels. His book, Unequal Democracy: The Political Economy of the New Gilded Age, provides readers with stunning statistical data about the close connection between partisanship, policy, and economic inequality. The book demonstrates that it will make a huge difference which party will be in power after November.

According to Bartels, the skewed distribution of income is not simply a result of "natural" market forces but is a direct result of public policy and partisan choices. In one of the most powerful sections of his book, Bartels makes a straightforward and compelling argument: Americans in all income brackets do better financially when Democrats inhabit the White House while the macroeconomic policies of Republican presidents disproportionately benefit the wealthy. As a historical example, he points out that both parties have pushed for tax cuts but when President Kennedy did so, his experts emphasized that the beneficiaries in the "lower brackets, would promptly spend a large part of the proceeds on goods and services, thereby stimulating production, employment and income." When Reagan pushed for a tax cut, his team emphasized that to have an effect, tax cuts "could not be given to the middle class or even the poor. In order to be successful, tax cuts had to be directed primarily toward the wealthy because of their larger role in savings and investing...."

The pattern is clear and consistent. The core argument in the Bartels book should be at the forefront of voter's minds in November. As Mark Twain once wrote about the past, "history doesn't repeat itself, but it rhymes." The patterns presented by Bartels are very compelling and, given that Senator McCain has not hinted at any major break with GOP economic policies, the choice for voters is clear. If Bartels is right, and there is ample evidence to suggest that he is, voters would greatly improve the chances for policymakers to mitigate income inequality if they vote for Obama. If they vote for McCain, inequality is likely to increase.

Bartels offers many other interesting arguments that are relevant in this campaign. In contrast to Thomas Frank's assertion that working class voters have been tricked by cultural values arguments, Bartels shows that most lower income Americans have in fact voted according to pocketbook politics, rationally, and have generally supported Democratic candidates. Blue collar voters have stayed with Democrats, while wealthier Americans fled to the GOP. Republicans have depended on stronger economic conditions during elections, Bartels says, to win the votes of so-called Reagan Democrats, given that voters operate based on short-term considerations.

It is rare for a social scientist, employing the most rigorous techniques of the discipline, to provide such cogent arguments about the biggest contemporary questions of the day. Bartels captures the choice voters face when he writes that income inequality has "increased under each of the six Republican presidents in this period--Eisenhower, Nixon, Ford, Reagan, George H.W. Bush, and George W. Bush. In contrast four of five Democratic presidents--all except Jimmy Carter--presided over declines in income inequality. If this is a coincidence, it is a very powerful one. Even in the highly inegalitarian economic climate of the 1990s, Bill Clinton managed to produce slightly stronger income growth for families at the 20th percentile than at the 80th percentile, though families at the very top of the income distribution did even better."

With the shallow debates that we have seen in the past few months which party stands a better chance to capture the hearts and minds of working and middle class Americans, Unequal Democracy makes the choice voters face clear: Democratic policies spread the wealth and Republican policies protect the wealthy.

More soon from the academy....Julian E. Zelizer is the editor of "Zelizer's Book Corner" and a professor of history and public affairs at Princeton University's Woodrow Wilson School. He is the co-editor of "Rightward Bound: Making America Conservative in the 1970s" (Harvard University Press) and is completing a book on the history of national security politics since World War II that will be published by Basic Books.

Author, 'The Fierce Urgency of Now: Lyndon Johnson, Congress, and the Battle for the Great Society'