There's a brutal, bloodbath-type clash looming. And it's going to be held in a very big market: how people pay for things and how small business and individuals might accept charge cards on their phones.

While PayPal was the progenitor for Internet-based payment processing, a new breed of high-tech startup is emerging which will likely disintermediate PayPal out of business.

In the U.S., investor darlings Square receive all of the press attention and $100 million in VC funding at a $1 billion valuation. With their neat little card-swiping plug-in for smartphones, Square has created a bit of a phenomenon in that everybody with a smartphone can now be a self-contained, Visa processing merchant. Good idea; good for 'mom & pops' and good for small business.

Twitter founder Jack Dorsey is also the diabolical mind behind Square and heavily involved in both companies; he's CEO of Square and recently returned to Twitter to "lead product development," whatever that means.

With all of the deflating noises of Groupon and Zynga, however, is it possible Square might find themselves going the way of PayPal; downhill?

This could happen, particularly if the technology that the banks and credit card companies use should shift suddenly, say from the magnetic stripe or 'magstripe' (the dominant card technology in the Americas) to the 'smart chip' used on all cards in Europe, Asia and elsewhere.

But whether or not Square turns out to be the powerhouse it says it is, there's stiff competition emanating from abroad for this payment-card, iPhone-swiping company. And it's coming from Stockholm, Sweden.

Swedes, all Europeans, really, have been using their phones to buy Cokes from vending machines and wirelessly pay parking meters for a decade or more now; they develop, launch, commercialize and take up technology faster than Americans. Witness SMS texting. And the Scandinavians seem even faster at technology adoption than their other Euro-brethren.

Somewhat more quietly, but no less powerfully, iZettle, a Swedish startup has raised $11 million in funding to go after the smartphone payment processing market in Europe. 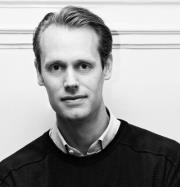 Jacob de Geer is the CEO/co-founder of iZettle and a very well educated, articulate entrepreneur. As with most Swedes, his English is excellent. He spent some time with me recently talking about his background, previous startups of his and iZettle.

So in 1999, de Geer joined a Stockholm-based startup called TradeDoubler as employee number one. This first company gave de Geer a good foundation for his later company development, as it was an Internet affiliate marketing firm which went public on the Stockholm exchange in 2005. De Geer worked at TradeDoubler until 2007, giving him a good eight-year stint in a company which was marketing widely on the Internet platform. It is perhaps this experience which would most foreshadow the good things -- or companies -- for de Geer ahead.

De Geer then started not just one but two companies in 2007: Ameibo, a "legal" movie sharing company de Geer co-founded and ran as CEO; and Tre Kronor Media a communications agency he also co-founded. Both companies were acquired in 2010; a rare double-headed success for de Geer.

All of these varied learning experiences gave de Geer the unusual qualifications and springboard he needed to conceptualize and start iZettle.

De Geer recalled, "After Tre Konor, I had more or less decided to get a 'real job' and not start something new... I promised my wife," he said somewhat sheepishly, as we all do.

"The only problem was," he said like a man who had originally intended to fulfill his wife's request but got sucked back in, "my wife was also an entrepreneur. She came back from a trade fair and said to me, 'I lost out on so much business because I couldn't take credit cards.' So I started Googling and found Jack Dorsey and Square; I suggested she get a Square."

Here's where things get complicated in a tech chasm way. Europe and America were originally divided by the GSM/CDMA partition on cell phones, which meant if you lived in Europe and traveled to the U.S. or Asia on business you needed a tri-band phone. And, if you were American but traveled abroad you likely needed another phone entirely which could take a sim card. The credit/debit card markets are much the same: separated.

In the Americas, the more mature, out-dated magstripe cards are the dominant if not exclusive technology for swiping a payment. In Europe and Asia -- virtually everywhere else, they use a smart chip technology which is a little, gold square on the front of every debit and credit card which you insert, not swipe. This is also known as "EMV" (Europay, Mastercard, Visa).

The smart chip cards are a lot 'smarter,' carry more info, are more secure and last longer than the clunky, easily scammed and easily worn magstripe cards. There are many more millions of smart card users worldwide than magstripe users, though this doesn't seem to have dawned on the geniuses at Square.

I give iZettle a big advantage for these reasons. Theoretically, if the banks and credit card companies move to this safer and better smart card technology, as I believe they will, then Square is out of business.

So the irony of de Geer's wife's going to Square first is dripping. When de Geer and Mrs. de Geer tried to get a Square sent over to them for trade fair use; Square denied them. "Unfortunately, you're in the smart chip card part of the world -- we only do magnetic stripes." Really? Well, we'll just see about that.

So like any irritated and frustrated customer, de Geer set out to build a better mousetrap; in this case, one that would catch a mouse in Sweden.

"Europe is a complex, multicultural environment with many languages," de Geer said, "a comprehensive solution was required. Besides, the magstripe technology was very basic, it wasn't encrypted and anyone could read it."

As the fundamentals of iZettle percolated inside de Geer's entrepreneurial head, de Geer said he was pretty sure that the U.S. magstripe platform would not changeover to the EMV side. "From the U.S. perspective this is all a numbers game; why change?"

Though de Geer and I disagreed about whether the U.S. would come over to smart chip technology (I believe it certainly will) I did convince him it was a distinct possibility due to the banks' and credit card companies' interest in fraud prevention.

"This is all driven by the card networks," de Geer observed, "all the markets are in transition."

With regard to Square, de Geer is typical diplomatic Swede, "I think we can co-exist... we're in two different markets. Markets in Europe are so different; you have to localize your service. But Square will continue on its fantastic journey."

Hmmm... I'm not so sure; especially when the EMV cards are so much better on multiple fronts. It almost seems like a fait accompli that the U.S. will join the rest of the planet on EMV.

As if to make my case, de Geer went on, "The difference between EMV and the magstripe is astronomical. The hardware security of iZettle versus Square is different worlds."

"For iZettle and Europe, the 'user experience' has to be amazing -- that's so important for us. In order to be successful in Europe, though, we needed a global approach."

iZettle is a fantastic development for small business and sole proprietors, who previously in Sweden had to pay about $4,000 just for the antiquated swiping terminal and the whole host of other fees that take a bite out of them.

And in the area of pricing, cost to the end user, the 'swiper' if you will, iZettle is by far the more favorable with Square vacillating wildly recently, "waiving" some fees for customers; a sure sign of trouble, and in some instances Square "holding" merchant funds for a month or more. The holding of small businesses funds for any period of time will kill Square outright.

Another big advantage of iZettle is that no sensitive financial or other data is ever stored on the device, a dynamic that I'm not sure is true of Square.

The one area where I find iZettle deficient and Square superior is in the devices they can be used upon. iZettle is only iPhones and iPads for now. Square can be used on iPhones, iPads and Androids; Droids being the increasingly popular Apple alternative in America with over 50 percent of the market share of smartphone sales.

According to de Geer, "The real early metrics for us were that Sweden today is 9 million people where today we have 200,000 traditional 'acceptance terminals' at shops, restaurants, parking meters and the like. Yet we have more than 1.5 million iPhones... that was the magnitude of opportunity, to turn those iPhones into personal 'acceptance terminals.'" The potential was perfectly clear to me through that statement.

Let's have a little test, shall we? Have a look at the Square YouTube video and then the iZettle YouTube video. Which one would you use after watching the video alone? I know which one I would use; hands down. (Check the comments under each video.)

The one wildcard in this classic struggle may prove to be Google Wallet. Some think this latest Google development will completely take over the market, especially if they can become the payee, too, and accept cards. I'm not so sure. Google has proved pretty inept at taking over any markets whatsoever since their original search triumph.

I don't know who, iZettle or Square, will win this thing or even if there will be a thing.

But I bet there is a thing and a big one because just like VHS versus Betamax, there's got to be a winner when different technologies empower different people to different things on different platforms.

I've also sided with the underdog. I think I like the odds of a 30-employee Swedish startup with $11 million more than I like a great, big, over-hyped U.S. tech company with $100 million and an absurdly otherworldly valuation.

Stay tuned. This could get messy.