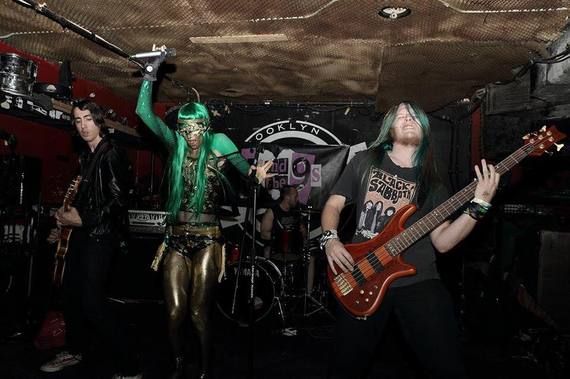 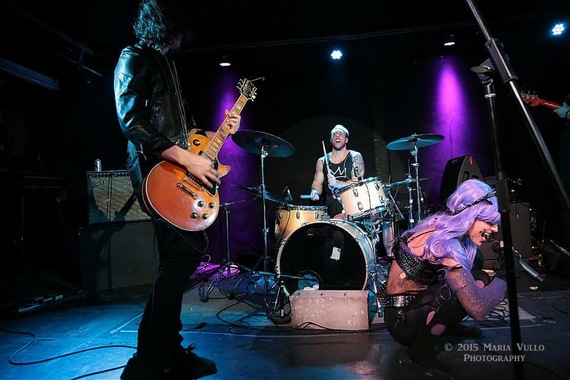 First of all, where has this band been all of our lives? The answer is . . . Brooklyn.

By their own admission, the band is a beast - a very hungry, energetic beast that wants to feed off of your energy. Basically, they want people to come out to their shows. They want to blow your minds with their music.

Their lyrics to "Other Side" say it best, "I've got it. You want it." It's true. You want to hear this band. I haven't been this excited about a band in years.

The lead singer wears a variety of costumes with wings, makeup, wigs. She says that providing a visual escape is part of the puzzle. J9 knows that if she jumps off stage, the band is still rocking, which is the other part of the j and the 9s puzzle.

Everyone plays their part in this band. Everyone participates in songwriting, as well as promoting the band. They have gotten to where they are on their own steam.

The band consists of j9, singer/flute; Frankie Figrz, guitar; Kouqj, bassist; and Dagger on drums. This lineup is the one, the powerhouse of all past lineups.

According to the bassist, KouqJ, audiences see j9, then they hear the force of the sound from the band. KouqJ claims that people love the sound and can feel the energy from j9 and the band. J and the 9s have been compared to the Yeah Yeah Yeahs and The Runaways. They describe their sound as the Yeah Yeah Yeahs plus Joan Jett mixed with The Stooges.

The band attended SXSW recently, where they played backup for Bumblefoot from Guns N' Roses. J9 said playing at the festival was an incredible experience and they met a lot of new bands that they hope to play shows with soon. Dagger would also like to give a shoutout to Grown Up Avenger Stuff.

Kouqj recommends bringing plenty of sunblock, an umbrella and water, if you come to see them at any outdoor concerts during the upcoming tour season.

If we're lucky, we'll see J and the 9s on the Warped Tour this year. The details haven't been worked out so keep your fingers crossed.

J and the 9s will also have a new album out sometime later this summer. According to Kouqj, who has been mixing the album, it will be kick-ass and badass. I would not expect anything less from this band.