J.A. Tyler is busy. Very busy. An author and editor, Tyler is producing some of the most challenging, distinct and provocative works of modern fiction -- either in his own work or the work that he publishes from other authors. Tyler is the founding editor of Mud Luscious Press, an indie fiction press out of Fort Collins, Colorado, publishing what it calls, "raw and aggressive works by writers unafraid to destroy and re-suture words" since 2007. It recently expanded to include two imprints, Nephew, for smaller experimental works, and Blue Square Press, a small press run by Ben Spivey and David Peak that also publishes experimental work and was acquired by MLP in 2011.

Tyler's own work as a writer and editor is really best described by online literary magazine The Collagist in their 2011 review of his book A Man of Glass & All the Ways We Have Failed:

As founding editor of Mud Luscious Press, he has been at the forefront of a movement in publishing books of all sizes and timbres, both tonal and atonal. A movement of small press books that takes seriously the charge to make a literary instrument out of a text.

Tyler recently chatted with The Huffington Post about what inspires his writing, where his unique style comes from and running a book press in Colorado.

I’m the author of eight books of prose and poetry, with several other titles forthcoming through 2015. On the editorial side, my roles include founding editor of Mud Luscious Press, editorial assistant at Tarpaulin Sky, editorial assistant at Dzanc Books, reviewer for The Nervous Breakdown and The Rumpus, and contributor to Monkeybicycle and Pank. I am also a high school Language Arts, Theater, and Film instructor, a summer institute co-director of Colorado State University’s National Writing Project, a freelance line-editor, a husband of nearly 13 years, and father of two adorable kiddos.

How long have you been a writer?

In the 6th grade I wrote a “book” modeled on the choose-your-own adventure stories I’d been reading. I illustrated that book and the teacher laminated the cover. My first “professionally” published story appeared in The Writer’s Post Journal in 2005. One of those two places is the starting point, though I’m not sure which one.

When did you know you wanted to be a writer?

I’m not sure: Maybe as early as grade school, when I was devouring as much Dean Koontz and Stephen King as I could. Or maybe since I read (and fell in love with) The Catcher in the Rye and The Old Man and the Sea and Of Mice and Men in high school. Or maybe it was in college, when I discovered Tim O’Brien and Kurt Vonnegut. It feels like I’ve always known, only never said it out loud. It has just become what I am, or I have become whatever being a writer is.

Which writers would you say inspire your own work?

Where do your stories come from? Where do they start? From a picture? A character? A setting? A feeling? A job? Tell us about the process.

My stories typically start with a single image or captured moment in time. From there, the words just come. I blare music so loud that I can’t think anymore and the images spool. All I have to do is gently set them down on a page, because they are fragile, and can break.

Currently, with two kids and a mountain of always-catch-up work, I write on an irregular basis. Typically I write either late in the morning (before anyone is up) or late at night (when everyone is gone) and I usually tap out at about 1000 words or so before I feel good and spent. I start each new writing bout with a review / revise of the previous session’s material, then dive in. When it comes time for whole manuscript editing, I set aside any writing I’m doing to focus solely on those edits, and I’ve quickly learned that no matter how much I dislike the taste of editing, the
more editing I do, the stronger the final work it.

What is it like to be a writer in Colorado?

I’m eternally influenced by my environment, so living in a place like Colorado is perfect: sun rain wind snow, trees with and without leaves, mountains lakes rivers cities. Really, there is no better place for me. Plus there is a growing richness in indie presses here (Counterpath, Subito, Mud Luscious Press) as well as a strong presence from writing programs at universities in Fort Collins, Boulder, and Denver.

What is Mud Luscious Press?

Mud Luscious Press is an indie press based in Fort Collins, seeking to publish raw and aggressive works that challenge the defining border between fiction and poetry. We started as an online quarterly in 2007, began making handmade chapbooks in 2008, and switched to perfect-bound books in 2010. Since our beginning we’ve published 21 online quarterly issues, 60+ handmade chapbook titles (produced in the tens of thousands of copies, all made at my kitchen table with a printer, a stapler, and some rubber stamps), nine novel(la)s, and two anthologies.

Also, in 2011 we began our Nephew Imprint Series, which publishes those shorter works that were so linguistically ripe we simply couldn’t live without them, and we now have 6 titles under that imprint. At the same time we acquired Blue Square Press, an already established press that publishes even more aggressively experimental work than other series in the MLP line, and which currently has 5 titles to its credit.

What made you want to start a publishing company?

Every decision I’ve ever made with Mud Luscious Press from founding the online quarterly to making chapbooks to producing books and acquiring imprints has been a gut reaction. I wanted to, so I did, and here we are, six years later, dozens of titles distributed across the world on a daily basis, and waiting for the next instinctual push to tell us where to go next.

What kind of books/writing/writers do you look for for MLP?

We look for those authors and books that understand how to use poetic language and poetic approaches but that maintain a narrative arc as well. We firmly believe that these books are rare, so when we find them, we publish them.

Is it difficult for an indie book publisher to make it and get the attention of the reader whose attention is scattered by so many forms of entertainment/art these days?

Yes. A million times yes. But so long as our current book funds the next book, we’ll keep at it.

What is next for MLPs? What books are coming out, have just come out, any secret things churning/cooking that you want to tell us about?

We recently re-released Ken Sparling’s magnificent cult-classic Dad Says He Saw You at the Mall (originally published by Knopf in 1996) with gutted cover art by the original designer and a new introduction by Sparling that is, in short, brilliant. We are also poised to release our last novel(la) of the year, Robert Kloss’s stunning civil war era The Alligators of Abraham. This is Kloss’s first full-length book and it is one of the richest and most enchanting titles in our collection -- plus it will come with a hand-drawn cover and interior illustration by genius Matt Kish, author of Moby-Dick in Pictures (Tin House, 2011).

We are also looking forward to our next Nephew title, Billie the Bull by xTx, which Dennis Cooper described as “…mind-bogglingly and intricately superb down to its tiniest punctuation marks. To me, xTx is about as great as it can get. Seriously, I'm awestruck.” And next year, we’ll start with a novel(la) by Michael Kimball, whose most recent book was lauded by Oprah.com and The New York Times, and we’ll publish a Nephew title written by a ten-year-old home-schooled girl from Las Vegas, which we’ll be publishing as a non-profit book to fundraise for a local youth literacy program.

My latest novel Water was released this fall, and was described by Fence Books’s Joyelle McSweeney in this way: “As Tyler manipulates a deliberately constrained vocabulary -- Boy, Girl, Land, Ocean, Woods, Axe, Egg -- a minutely configured and reconfigured universe comes into view in which bodies are conducting materials for violence and rain pours down as relentlessly and ambiguously as existence itself. Tyler pursues this vision with stamina and acuity: dead-on, a dead-eye.”

I’m also looking forward to two major releases in 2013: The Zoo, A Going(Dzanc Books) and Colony Collapse (Lazy Fascist Press). Lastly, if people want to hear me read or chat with me about my work, I’ll be reading at The University of Alabama’s Bankhead Visiting Writers Series on Oct. 18th as well as headlining an online reading for Aqueous Books on Nov. 14th. Folks can also find my books and contact info at www.chokeonthesewords.com.

Any advice for young writers?

Words can do whatever you want them to.

Visit MudLusciousPress.com or ChokeOnTheseWords.com for more information on the press and J.A. Tyler. 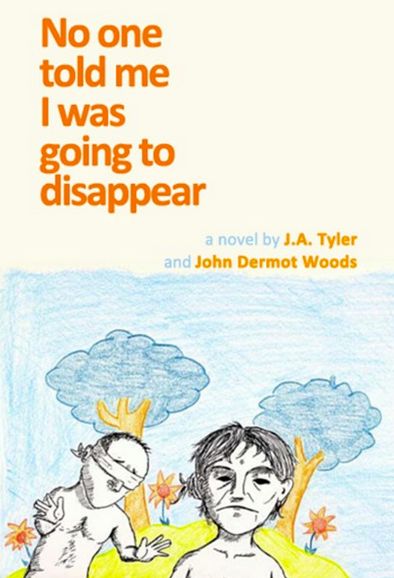 1 / 22
Books By J.A. Tyler
"No One Told Me I Was Going To Disappear" -- J.A. Tyler, John Dermot Woods from Jaded Ibis Press. Book cover art via <a href="http://chokeonthesewords.com/">ChokeOnTheseWords.com</a>.