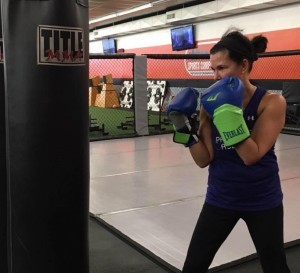 Prior to joining ClassPass in early January, I had never taken a real boxing class. Kickboxing, sure, in a group-fitness sort of way. But nothing with real boxing gloves in a real ring. I had no idea what a tough workout it is! Now I get why players like Caroline Wozniacki have added boxing to their off-court training routines.

Today marked my second class at Atlanta Sports Complex. This place is an athlete's gym - no frills, no fancy art on the walls, the scent of sweat in the air -- and the instructors are all about pushing you to your limits.

In my first class, after 10 minutes of non-stop aggressive footwork (i.e. cardio) drills in the ring, I found myself doubled over, gasping to regain control over my breathing. I fancy myself as being in pretty good shape, physically, but this workout was already kicking my tushie and we still had 50 minutes to go.

Next was the bag work. The instructor, Micah, called out various combinations of jabs, crosses, hooks, and upper cuts, all the while "encouraging" us to keep our feet moving around the bag as we punched. Periodically, he stopped us and had us drop to the floor for pushups or burpees or mountain climbers - HOLY SH*T! By this point, I was totally dying and, still, we were only halfway into the workout.

During the bag work, Micah called each of us onto the mat for mitt work which involved hitting his mitt-covered hands with a variety of punches as he moved around the mat. There were single punches and combinations. At one point he had me do 10 right jabs in a row (I'm a lefty so my right arm is definitely the weaker one), no stopping. I could barely move by the end of this, but back to the bag I went.

And, just when I thought my arms would fall off, it was time for sled work. For those of you uninitiated in this particular form of torture . . . er, training . . . the sled is a weighted apparatus that we had to push across the gym, back and forth, multiple times. Thankfully, there were only 4 sleds and 8 class members, so I got to rest in between sets, though "rest" is a relative term in this case.

Sprints up and down the gym came next. My lungs (and legs) were on fire at this point, but I persevered, seeing the light at the end of the tunnel.

We finished out with ab work on the mat, the only part of the class that I felt completely confident I could complete. And, lest you think we were rewarded with some restorative stretching at the end, you would be wrong! Micah worked us until we had fatigued every muscle in our bodies then left us to do the sissy restorative stuff on our own time!

If it sounds like I hated the workout, well, that's sort of true. But, I hated it in the way you hate anything that is hard yet you know is good for you. I felt completely wrung out yet strong and accomplished when I walked out of there. Yes, I was able to walk out!

And, yes, I willingly walked back in there this morning. It was more of the same with a few new torture techniques added for good measure. Things like sprinting with a resistance band around my waist while my workout partner had a connected band around her waist adding resistance to my run. And using those same connected bands and resistance to do bear crawls across the gym. Sounds fun, right?!? But, once again I left the gym feeling good about the fact I had made it through another session. Hey, Micah, see you next week!

Author's Note: This post is part of a 21-day series about a clean eating challenge on ParentingAces.com in case you'd like to read more!