Two legendary rebels of the 1950s, one legendary opportunity missed.

Jack Kerouac famously became a recluse, but it turns out he had movie star ambitions. In this 1957 letter, found by a memorabilia expert in 2005 and recently sold at auction by Christie's, the famed beat author asked Marlon Brando to buy the rights to "On the Road" and turn it into a movie -- in which they would both star.

I'm praying that you'll buy ON THE ROAD and make a movie of it. Don't worry about the structure, I know to compress and re-arrange the plot a bit to give a perfectly acceptable movie-type structure: making it into one all-inclusive trip instead of the several voyages coast-to-coast in the book, one vast round trip from New York to Denver to Frisco to Mexico to New Orleans to New York again. I visualize the beautiful shots could be made with the camera on the front seat of the car showing the road (day and night) unwinding into the windshield, as Sal and Dean yak. I wanted you to play the part because Dean (as you know) is no dopey hotrodder but a real intelligent (in fact Jesuit) Irishman. You play Dean and I'll play Sal (Warner Bros. mentioned I play Sal) and I'll show you how Dean acts in real life.

Sal is the narrator of "On the Road" and a thinly veiled version of Kerouac himself, while Dean represents Neal Cassady. The book sees them travel across the nation a number of times, stopping in Mexico along the way, getting drunk and high experiencing the glories of freedom and the existential terrors of 1950s America.

Kerouac writes that he wants to make the film so that he can establish a healthy bank account for himself and his mother, with whom he was very close. In fact, the letter is addressed from Orlando, where he would spend time living with his mother. But he also had ambitions for reshaping American cinema, which he said he could do with his book "The Subterraneans."

What I wanta do is re-do the theater and the cinema in America, give it a spontaneous dash, remove pre-conceptions of "Situation" and let people rave on as they do in real life. That's what the play is: no plot in particular, no "meaning in particular, just the way people are.

Brando, who had won an Oscar a few years before for his film "On the Waterfront," declined to purchase the film, and only this year will "On the Road" be made into a movie. Starring Sam Riley as Sal, Garrett Hedlund as Dean, Kristen Stewart as Marylou and Kirsten Dunst as Camille, it hits theaters later this year. 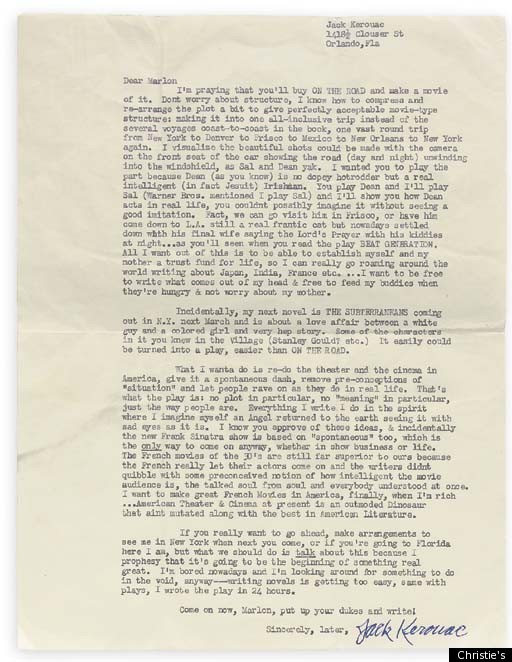