Jack Nicholson sat down with Parade Magazine for an itnerview that will appear this coming weekend. Excerpts:
Nicholson discusses how Anjelica Huston beat him up after he impregnated another actress... 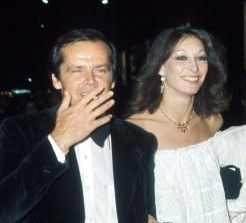 The great love of Jack's life was actress Anjelica Huston, whom he met in 1973. Their romance lasted until 1989, when Anjelica learned that actress Rebecca Broussard was pregnant with Jack's baby. "I was in a quandary," Jack quietly explains to PARADE's Dotson Rader. "I knew having a child was a boon to my life, but I was in a wonderful relationship with Anjelica. It was as good as it gets. I immediately told her what was up, and she made the decision for us." The public presumed that Nicholson had dumped Huston for Broussard, a younger woman. The truth is the opposite. "Anjelica's first response was, 'You have to support this woman,' " Nicholson says. "Her second response was to come down to my job and beat the hell out of me. She really beat me up, I tell you. Anjelica can punch! Meanwhile, Rebecca didn't want me to separate from Anjelica. Well, they both have good taste," he says laughing.

Nicholson's success and ageless charm may explain why young women still desire his company
He admits, on most mornings he wakes up alone. "I'm such a wag!" he says, winking. "I'm a scamp. I don't deny it. I like myself." And he loves women. "I grew up in a beauty parlor my family ran, so I'm used to getting along with ladies. I prefer their com­pany, for the most part. I was pampered from the very beginning."

***
The below quotes are from the online exclusive, which appears only on Parade.com

His Take on Women
"These issues between men and women are not psychological. Look, remember what a gland is. Most of these are glandular issues. A gland is what allows that mother to lift that truck off a child. Whatever intelligent design is, it's not going to leave the continuation of the human species up to fashion-crazy, flitting mentalities. It's in those glands.""The infatuation cycle of 18 months hasn't changed a lot since the monkeys. Look at the numbers. Eighteen months is nine months doubled. A woman's entire system is set so that when you're having that procreative act with a woman, you're dealing with a being whose actual cycle is nine months. It doesn't have to do with her brain. It has to do with her entire bodily system, which is there to overcome the brain. We don't legislate this stuff. We don't out-think it. You cannot change these fundamental things that we are as human beings--but you can adjust to it."

Jack's Working-Class Childhood
"[New] Jersey's the most parochial place in the world, but the Shore, from Red Bank to Point Pleasant, was a very great place for a kid to grow up. It's a country club kind of mixed area with every kind of person there. All the way from the beach to Main Street, you could read the dollar sign on the houses. As little kids, we didn't deal with class boundaries. We were all over one another."

Hanging Out at New Jersey's Monmouth Park Race Track...and Handicapping Horses
"Even that I felt was an advantage. I was a good handicapper. That's where I got my spending money. The first car I bought was with racetrack money. Even when I worked at MGM, I ran football cards for the bookie there. In the entire season we paid off just two tickets. That's how hard it is to pick three winners against a spread."

His Catholic Family
"I've a very Catholic Irish grandmother, one of the Lynches. She is the root of the family, although my immediate family were failed Irish Catholics. So I had to haltingly investigate Catholicism by myself because nobody asked me to go to church. I was the oldest kid in my First Communion classes. In my opinion, if you're going to be theocratic, Catholicism is the most intelligent belief system."

"My family were tough-minded people who didn't go much for what they called the 'shanty Irish' or professional Irish. But they were Irish, and it manifested itself from an early age. I could always express my opinion, like everybody else, and things got talked about. I wasn't inhibited by anything."