With Bryan Singer's blockbuster Jack the Giant Slayer in theaters, it might be useful to ask ourselves: who is this Jack? In English-language fairy tales, Jack is the central figure in a wide variety of adventures. He's known for slaying giants, so Singer's film doesn't stray too far from folklore. But Jack does a lot more, too. 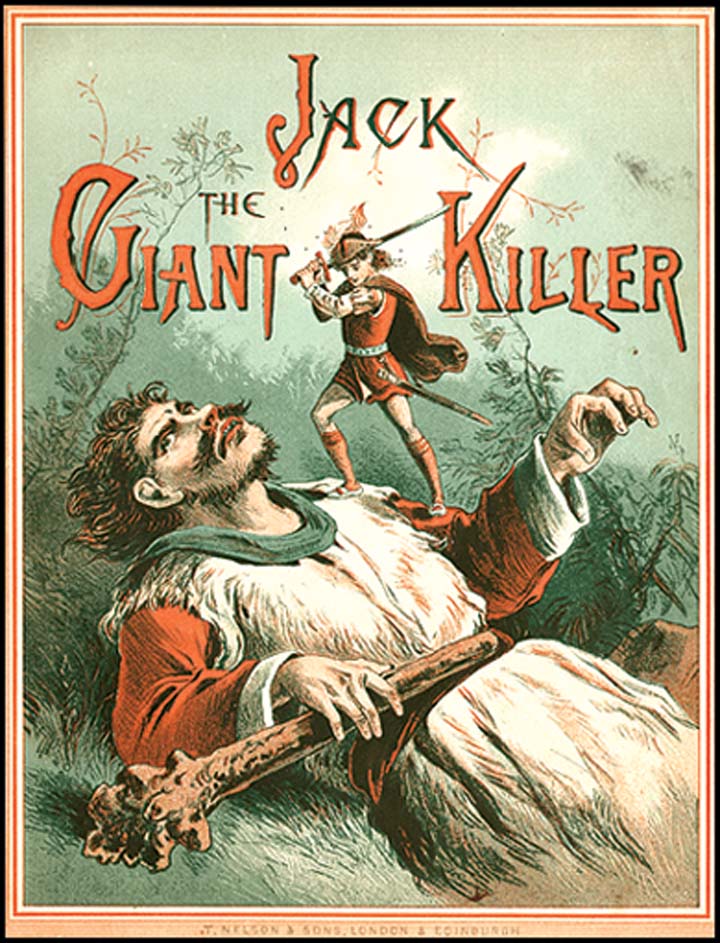 Jack's tradition goes back surprisingly far; the earliest known Jack Tale was written down in the 15th century. In this story, "Jack and His Stepdame," Jack is a farmer's son whose stepmother wants to send him into indentured servitude. Jack's father compromises by sending him to a far pasture to watch the cattle. There Jack meets a beggar, with whom he shares his meager lunch. In return, the beggar offers him gifts. Jack asks for a bow and arrows; the beggar gives him a magical bow which never misses its mark. Jack asks for a pipe, to make music and be merry. The beggar gives him a magical pipe, which compels all who hear it to dance. When the beggar insists on giving a third gift, Jack remembers his stepmother's look of hatred whenever she sees him eat; he wishes that, when she looks at him that way, she'll fart thunderously. 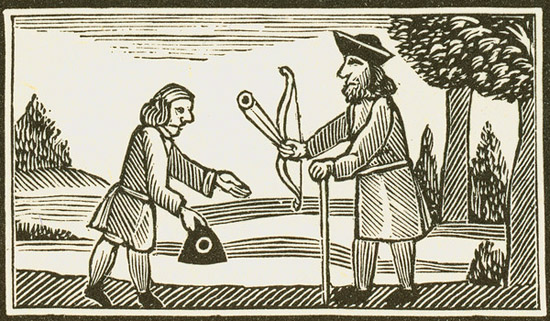 The beggar gives Jack the bow, from a chapbook version of "Jack and His Stepdame."

Using the pipe, which causes the cattle to dance along behind him, Jack easily herds them back to their pens, and heads home for supper. Jack's father invites him to eat, whereupon his stepmother glares at him, and farts so loudly that everyone laughs at her. She retires for the night, humiliated. 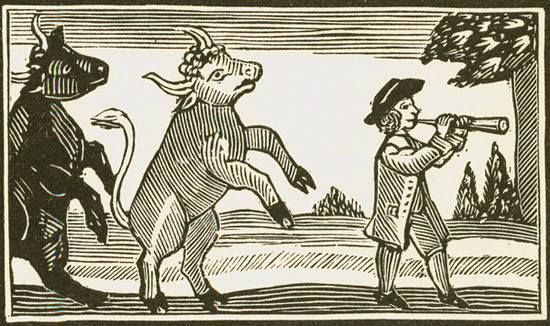 Jack makes the cattle dance to their pens, from a chapbook version of "Jack and His Stepdame."

The next day, Jack's stepmother sends a mendicant friar to beat Jack. To avoid a beating, Jack promises to shoot a bird for the friar's dinner. Using his magic bow, he shoots a bird and causes it to fall in a briar thicket. When the friar enters the thicket, Jack plays the pipe, forcing the friar to dance, so that he is horribly scratched by the thorns. When Jack lets him go, the friar reports to Jack's parents, and Jack's father demands to hear the pipe. The friar, fearing the music, begs to be tied to a post. Jack begins playing and carefully leads the household outside. Everyone has a good time dancing in the moonlight, except the friar, who injures himself by banging his head against the post, and the stepmother, who cannot help glaring and farting. Jack lives happily ever after. 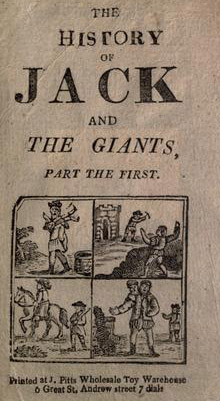 You may be surprised to encounter fart jokes in Jack tales, but there's a long tradition of bawdy Jack tales. "Jack and His Stepdame" is as much fairy tale as dirty joke, however, and its fairy-tale elements reveal deeper meanings. Jack's act of kindness results in three gifts from a magical donor--a typical fairy-tale beginning. The magical bow is a limitless source of food, and the magical pipe a limitless source of art. Jack thus returns home with both physical and spiritual nourishment for his community.

The next stage in Jack's development brings him closer to today's film. "Jack the Giant-Killer," or to give it its early literary name, The History of Jack and the Giants, was first printed in chapbook form before 1708. It's an episodic tale in which Jack travels around Britain, especially Cornwall and Wales, killing giants. Some he dispatches with mere violence. Others, he defeats with clever trickery, as when he fools a hapless giant by apparently cutting open his stomach; Jack's really faking it, but the giant attempts to compete and rips open his own belly. 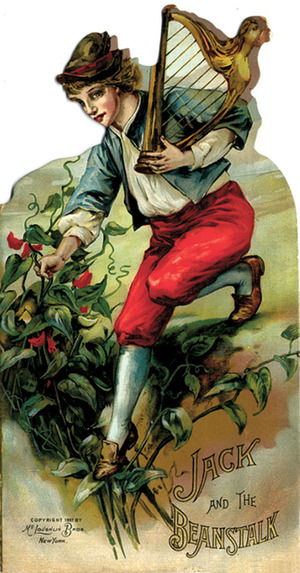 At around the same time as The History of Jack and the Giants, another tale was making the rounds in the English oral tradition. In 1734 a brief summary of "Jack Spriggins and the Enchanted Bean" was published, which from its plot is clearly a version of "Jack and the Beanstalk." "Jack and the Beanstalk" is a classic tale: Jack, a silly and impractical boy, trades his family's cow for some magic beans. His mother angrily throws the beans out the window, and during the night, a giant beanstalk grows up to the sky. Jack climbs the beanstalk three times, each time raiding a giant's castle; he steals a bag of gold, a goose or hen that lays golden eggs, and a harp that plays by itself. On Jack's first two raids, the giant's wife saves him, but on the third, he is pursued by the giant. He chops down the beanstalk, the giant is killed, and Jack and his mother live happily ever after. Singer's film combines this tale with "Jack the Giant Killer."

Various psychoanalytical interpretations of "Jack and the Beanstalk" (e.g. Bruno Bettelheim's) suggest that the beanstalk is a phallic image and the tale is essentially about sexual differentiation from one's parents. This may reveal some of Jack's meanings, but there are others; Jack's mythical nature is that of the explorer of other realms, and the slayer of ogres, not just for his own sake but for his community's. Like Prometheus stealing fire from Zeus, Jack finds a magical giant in the sky and brings back his treasures. These include limitless resources: a goose that lays golden eggs and a harp that sings beautiful music. Like the bow and the pipe of "Jack and His Stepdame," they represent limitless physical and spiritual nourishment for his community. When he has them, in Flora Annie Steel's telling, "every one was quite happy," and Jack "became quite a useful person." 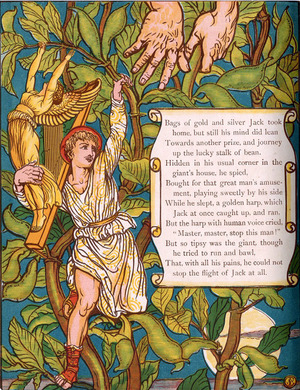 In these three early Jack tales, then, we have the germ of Jack's persona. He's a trickster figure who brings back life-giving gifts for his community, while destroying the monsters of the encroaching otherworld. It's a pretty tall order for a young hero. Jack's battles with giants have entered pop culture in many novels and fantasy films, including an earlier Jack the Giant Killer. How does Bryan Singer's version measure up? See it and decide for yourself!

For much more on Jack, including references and a list of adaptations, see my article "Do You Know Jack?" originally published in Realms of Fantasy.