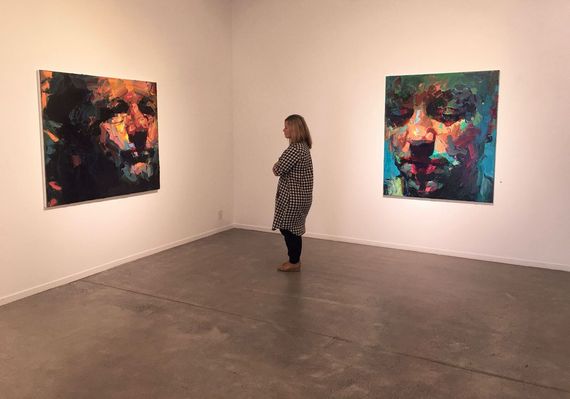 In his current exhibition Medicinal Skins at Whitespace Contemporary, Jack Trolove explores the idea body's skin as a seal for holding stories, using thick applications of paint to serve as metaphors for human skin. His goal is to generate intimate portraits with "skins" of paint that wrap and protect the body's fragile emotional and spiritual experiences and essences.

I recently interviewed Jack Trolove to learn more about his background, ideas and methods. 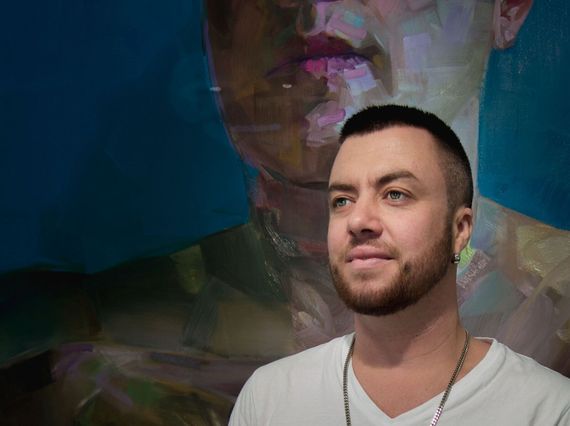 Tell me a bit about your early years. Were you always artistic?

I grew up in a big family of Irish Catholic story-tellers. We were raised with our Nana and Great Auntie, on a farm. For a couple of days there were four generations of us under the one roof - my great grandmother passed over as I was born. Our Nana was an incredible self taught jazz pianist, a highland dancer, and a powerful poet when she put pen to paper.

My mum is one of seven sisters, most of them, and their kids work in story telling one way or another - but more through theatre, film, writing and teaching. I have one sister who's now living in a Spanish convent but she used to work as a traditional iconographer, another sister is a poet, and the others also write. I guess it's normal in our family to be creative.

I've always thought in terms of colour and movement and stories and bodies, but I wasn't that interested (or good) at drawing or anything linear as a kid. I had to come to that by thinking sculpturally. 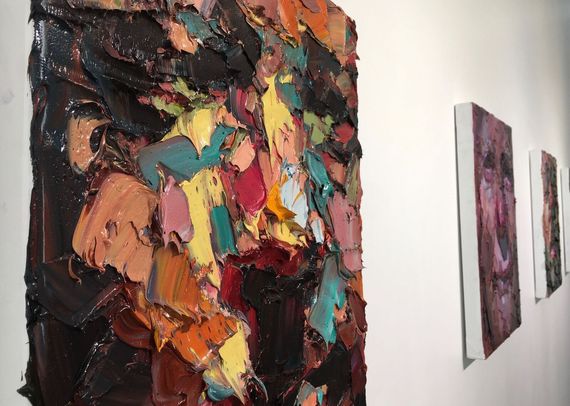 Installation view, with detail of Ecdysis

Where were you educated, and who were your mentors?

I did my undergrad at a regional art school, NMIT in Nelson, then years later went to Massey University to do my MFA. Both in Aotearoa - New Zealand.

My art teacher when I was growing up at our small rural school was amazing. Brent Firkin. His art room was the one place in the world where pure chaos reigned - and was enjoyed, not punished. That environment was like a pocket of heaven for me. Catharine Hodson and Sally Burton taught at NMIT - they were fiercely smart, and were so in love with painting it was infectious. My first mentors really though, were probably my aunties who proved it was possible to (just) make a living, and change culture through telling stories. 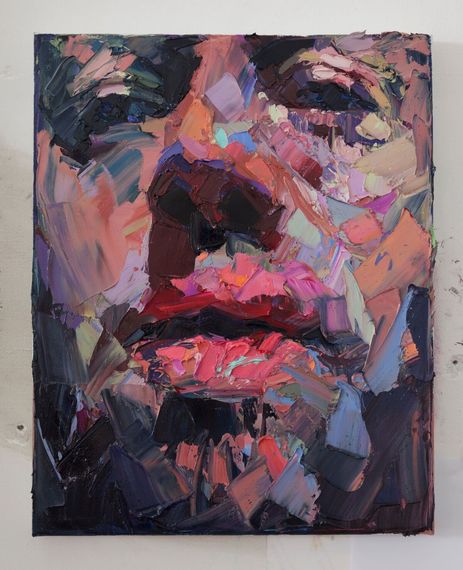 Jack, tell me about the title of your show--Medicinal Skins--and what that stands for.

I've been thinking of the body's skin as a seal for holding stories, using thick skins of paint to create human skins that are shedded and reformed, broken and resealed. With distance, these abstract slicks of paint, become skins - for wrapping the tender emotional, spiritual and physical experiences of the body.

The work grew out of thinking about the energetic and spiritual nature of gender transition - as a kind of ecdyses (a term usually used to refer to skin shedding in reptiles). Popular discourse around transgender people often fixates on assumed aspects of our physical experience, and tends to either mock or fetishize our bodies based on how we appear to others. Here I'm trying to shift the gaze off just our physicality (but by going 'through' the skin, and the skin of the paint), hopefully inviting a wider reflection about the otherworldly nature of transitions. 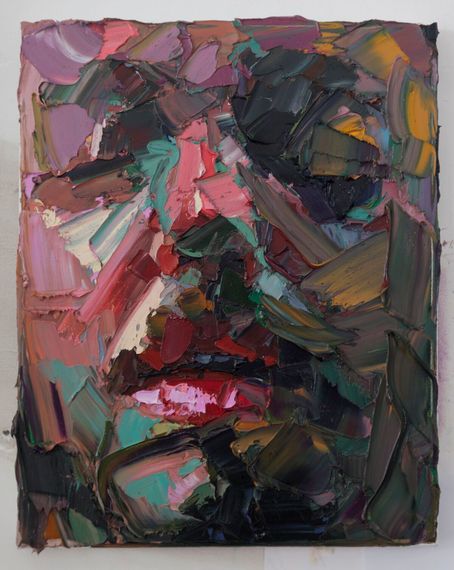 So there is a theme of transition, of shape-shifting in your work, right?

The titles all refer to some kind of transition or shape shifting. Humans changing form is ancient. Grief changes us. Love changes us. When people die or are born, we are changed. Gender transition is one contemporary, and ancient, expression of this magic but it sits inside a much wider practice of shape changing, loss, bliss and transformation - that we all have some embodied knowledge about.

By cutting and spreading paint with knives, I've been able to explore the tactile relationship of human skins and paint skins, charging the marks with my own sensations of 'changing skins' and living between worlds. The works are titled to invoke the magic of these in-between-spaces, with names like 'selkie' who were shape shifters in Celtic tradition, moving between human and seal bodies; and 'solstice' referencing another type of transition or shifting in between time. 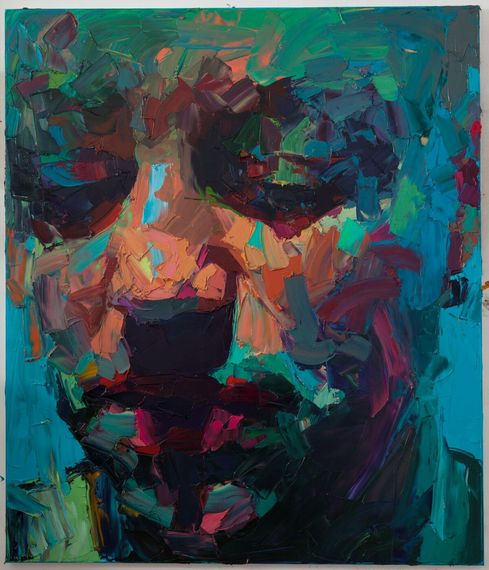 Tell me about one or two of what you feel are some of the strongest works in your current show.

Selkie is strong. It's her presence. She's weighted, you can feel her presiding over the show. I guess she's like the guardian painting. Slipping Skins also has a strong presence. Trance and Lahar, are exciting to me in that they feel loose and fresh and old all at once. Liquefaction is the ugliest but possibly the most exciting - it's full of clues for me of where to push into next. 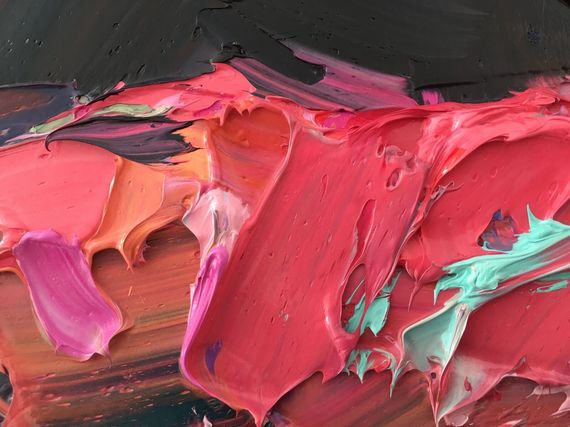 You seem to love paint as a material. Tell me a bit about how you work, mix and apply paint.

I'm really interested in how we feel history in our bodies, and painting is such an ancient thing. It's slow and frustrating, but on a good day it feels like it can open holes in the world. People have been making marks to tell stories for over 40,000 years. It's a kind of instinct. Comparatively the technology of painting hasn't changed much. Pigment and Oil. Like a potion. Some colours are made synthetically now but they're still pretty much minerals and oils. It's like a really old language. Mark making. Story telling. Feeling-finding.

I don't think of my paintings as portraits, even though that's how people often talk about them. I like the idea that they're portraits of an energy or experience rather than a particular person. Bodies like story-holders.

When I'm making them, I usually start with an image - a photo of myself or someone I know - just to get some scaffolding and some ideas about temperature I want to chase. Then I get rid of the image and follow the painting. It becomes about movement and what the marks are saying. It's a dance trying to hold enough form to feel a presence in the painting, but to break it down enough, loose it enough to let it feel alive. I always try to suggest a form, but not describe it. That way the work meets me or the viewer half way which I think helps it activate as a kind of conversation.

I used to build with slow thin layers of paint, back then the paintings could take months to make. The way I'm working now though is really fast. The big ones are like marathons. Sometimes a 15 hour stint. They need to be worked while they're still wet. If the paint gets tacky I can't slide it into other colours - so I have about a 2 day window. For every painting that works, there are usually five or six that don't. So it's kind of fast but kind of slow...