It was two weeks of pure hell for First Lady Jacqueline Bouvier Kennedy. First there was November 22, 1963 to November 25, the time span between the assassination of her husband and his funeral. Then the days leading up to December 3, when she was pushed out of the White House. For the nation who witnessed the tragedy from afar, it was a shock. For the FLOTUS who lived it, it was a rapid-fire nightmare. 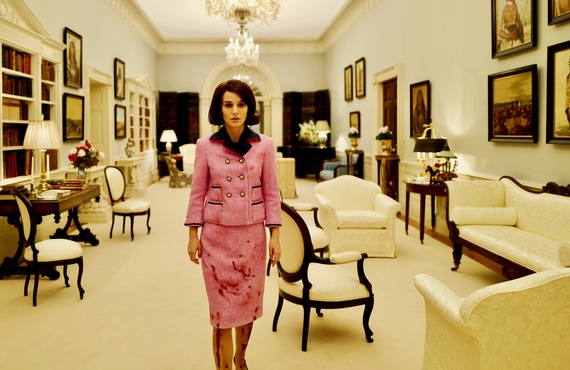 That's the premise writer Noah Oppenheim (Allegiant) presents in his perceptive, impressionistic screenplay Jackie, which follows the anguished 34-year-old Mrs. Kennedy (Natalie Portman, Black Swan) as she deals with the aftershock of her husband's death, the planning of his funeral and vacating her home. It's almost as if he creates a re-imagined Jacqueline Kennedy from scratch.

In Oppenheim's eyes, she's a tad more eccentric than the overly sophisticated lady that was presented to the public. His unpredictable Jackie is in a far more perilous state as she navigates the back and forth, snap decisions, reversals, planning and funeral staging that never went smoothly. Regardless, she still accomplishes her goals. Following her is like watching a tightrope walker on a high wire almost losing her balance, but never falling to her death.

Consider the circumstances. Consider the trauma that Mrs. Kennedy endured. Yet she was determined that the world see what the assassin's bullets did and that they never forget JFK's legacy. When asked why she didn't change her clothes, the pink suit that became a canvas for her husband's bloodstains and the brain fragments that were blown out of his skull, she responded, "Let them (the assassin) see what they've done."

Chilean director Pablo Larraín (Neruda) takes on a dauntless task and does a masterful job. He is not a U.S. citizen. He was born 13 years after the tragedy. Yet it is as if he lived through this historic event himself. He magnificently recreates the time, place and feeling. The nation was shocked, saddened and grieving. And behind the scenes the intensity of the situation was unfathomable.

The tension between Bobby Kennedy (Peter Sarsgaard) and vice president Lyndon Baines Johnson (John Carroll Lynch) is on view. The friendly, supportive relationship between Jackie and Nancy Tuckerman (Greta Gerwig), the Kennedy Administration's Social Secretary, is captured. The cat and mouse game a Life magazine journalist (Billy Crudup) plays as he interviews the grieving widow and she gives her side of the story, in bits and pieces, drips, drabs and fragments, is a wonder to behold. Him: "This will be your own version of what happened." Her: "Exactly."

Larraín also perfectly manages a highly skilled tech crew: Cinematographer Stéphane Fontaine (A Prophet) picks close-ups that focus on the first lady's distraught face. His shots of the funeral procession are as iconic as the ones watched on TV worldwide. Editor Sebastián Sepúlveda cuts scenes to the nub, to the bare necessities, and then he assembles them like a coherent past/present/future jigsaw puzzle. Costume designer Madeline Fontaine recreates the iconic red suit and pink suit with matching pillbox hat that perfectly convey an era gone by. Mica Levi (Under the Skin) creates a musical score that alternates between hypnotic and haunting at the appropriate times.

In a very competitive year for top performances by actresses (Viola Davis, Fences; Amy Adams, Arrival; Jessica Chastain, Miss Sloane; Rachel Weisz, Denial, Ruth Negga, Loving), Natalie Portman's impressive portrayal makes her one of the frontrunners for a Best Actress Oscar. The role is written with complexities and nuances that depict fragile feelings, disarray and courage under fire. Any actress who could successfully convey that difficult potpourri of mixed emotions would stand out.

Portman brings life to a complicated character, infusing it with a high level of consistent intensity and a sympathetic malaise that is beyond reproach. Her Jackie is forthright, manipulative, troubled, smart and nurturing. Portman is fully able to seize the moment that Kennedy was thrust into and create a point of view that is distinct. Viewers will savor her performance for years to come.

Four days of numbing trauma followed by humbling and humiliating circumstances, all examined under a microscope.

This is a work of art. A piece of genius. Brilliant filmmaking. Superb acting. It's a film that resonates.

The reporter: "Any advice for me?" Jackie: "Don't marry the president... I never wanted fame I just became a Kennedy."