Happy Birthday, Jackson Pollock. The most controversial artist of the 20th century was born one hundred years ago on January 28 in Cody, Wyoming.

Pollock remains a polarizing figure in art and culture, for all the right reasons.

He is roundly derided on each plateau of society for his poured allover paintings of the late 1940s and early 1950s. From Joe Six-Pack claiming that his third grade daughter could do just as good to post-modern scholars deriding the assertion that the arts can contain a singular heroic act, many can meet and agree that Pollock is overrated while sharing no other cultural attitudes in common. Feminists scold the complex relationship he maintained with his wife, the painter Lee Krasner, and the entire Pop Art and Pop Surrealist movements seem predicated simply to stand in opposition to what Jackson Pollock created. The acquisition of his pictures with public funds by museums has ended many a political career over the past 50+ years. 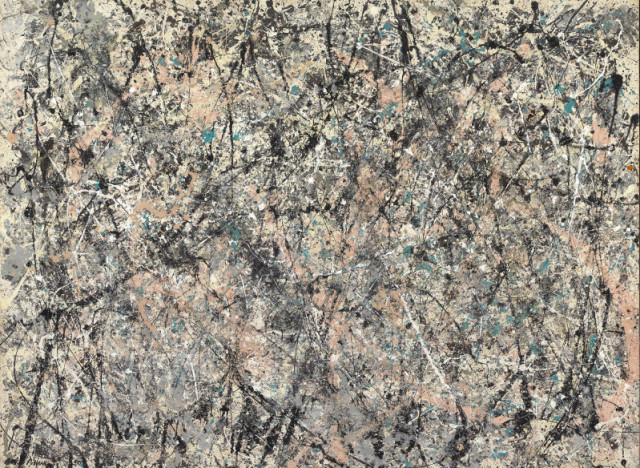 If you can measure a man by his enemies, Pollock makes Picasso and Warhol look like lovingly muddied mediocrities. Years ago I wanted to get one of Pollock's artworks as a tattoo. In searching over his catalog raisone I could find no image that was adequately recognizable when reproduced as an illustration in ink. This is quite an accomplishment for any artist, especially one whose work before and after his poured paintings emphasized the same literal black line that is the formal basis of traditional and modern tattooing. I had to settle for a rendition of the famous Hans Namuth picture of the artist stretched out over his canvas, the bucket of paint in one hand pulled back as the arm stretched forward with a primitive stick coated in chroma.

The tattooist, Mike Horton, asked me at the time if there should be spattered paint under the drawing of Pollock or perhaps flinging off the stick into space. No, I insisted. I had come to understand all too well that the power of Jackson Pollock as a symbol had far outpaced the majesty of his glorious pictures, be they the infamous allovers, the 1940s expressionistic masterpieces or the searching late work's fertile search for a reacquaintance with form.

And so, 16 years after getting that ink, I still goad people into the conversation of who their favorite artist is. So few ever give a definitive response. Art world denizens hem and haw and meander as if reciting their recollection of last year's ArtForum cover children. LowBrow etiquette demands a nod to the outlaw roots of the movement and an inevitable capitulation to the most dexterous realist to grace the inside of last month's issue of Hi-Fructose. Street art fanatics get quite "undergrad thesis" these days about the origins of Blek Le Rat and tagger names that exist only in legend. Philistines insist that media is art and the astute ones rightly choose Matt Groening over Spielberg as the greatest living artist. Sanctimonious stiffs insist there hasn't been a great artist since Raphael. Nobody ever says Thomas Kinkade, the squarest of souls having long got the memo that the painter of light is dreadful. When they return the question, I just pull up my sleeve; if you gotta ask, as they say, you'll never know.

Happy Birthday, Jackson Pollock, you did more in your 44 years on earth and the 56 since than almost any artist: you made people think and talk about art without ever involving yourself in conceptual art.